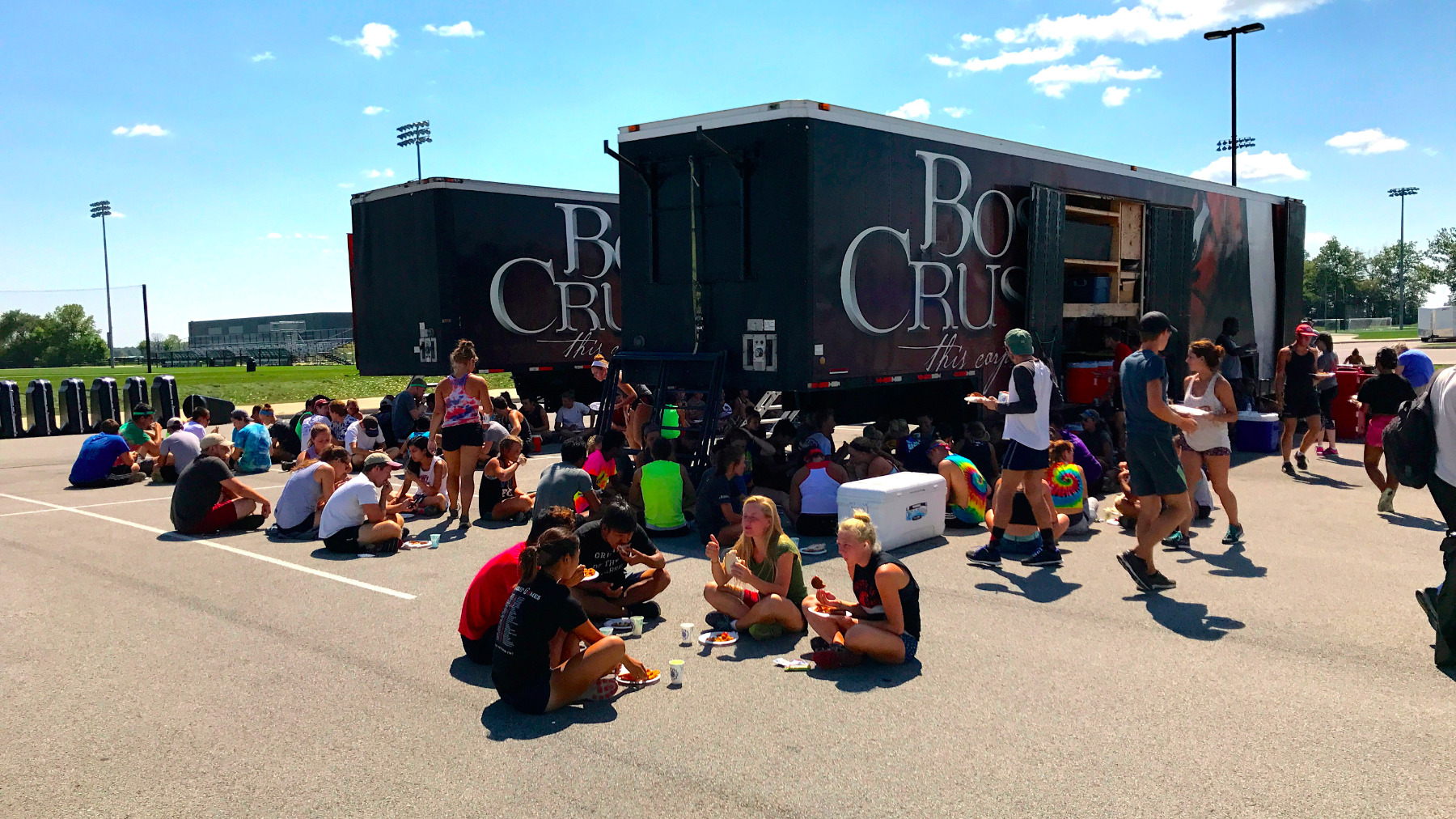 Lunch break at Grand Park on the first of two days of rehearsal for the Boston Crusaders leading up to the DCI championships in Indianapolis.

After a dawn patrol drive, I am now sitting at a rest area in rural Indiana, 50 miles from Indianapolis. Once the parking lot cleared at the Paul Brown Tiger Stadium in Massillon last night, I posted the last update to my blog, put away my computer and headed west. Around midnight, I pulled off into a 24 hour McDonalds, put a little more air in the mattress, put on some Kevin Russell Solo Piano (YouTube), and immediately went into REM. The weather here is sunny with a cool breeze. I am absolutely enveloped in open sky surrounded by a 360-degree flat horizon. The corn has reached its full height and nearing maturity. Soon the combines will be devouring giant swaths of the landscape. Fifty miles to go before I reach Indy.

Traveling the interstates can be an interesting experience. Construction zones in urban centers are scary where the lanes skinny down and trucks, cars and busses become a river of steel and rubber flowing though the concrete-lined canals. Do not make a mistake here and hope that nobody else does either. I cannot imagine what it must be like to drive one of the fleet of busses and trucks that carry the corps. The men and women that drive them are gifted in handling the big rigs as well as the rigors of drum corps touring. These are mission-critical staff with the highest degree of responsibility getting the boys, girls and other staff safely to 60 plus destinations throughout the summer. They travel tens of thousands of miles hauling tons of humans, instruments, props, and all. And, they can squeeze those rigs into some pretty tight places with precision equal to the kids on the field. Driving at night, sleeping by day, doing other things for the corps, these folks do it because they love drum corps. I met one such person last night, Robert a driver for the Cadets who was standing at the top of the stadium in the aisle next to me. We made a good personal connection as we witnessed together the impressive spectacle below. It was cool to share the show with many of the staff that ascend the stadium to watch their corps from the upper steps. Many pats on the back were shared with Robert and others who knew him well. We were all mutually energized by the kinetic energy of the movements and sounds that we all experienced together. It’s a close knit group among the staff of the various corps with many having toured together in the past. Peace, Robert.

There will be two days of rehearsal before the championships, so hopefully I will have a chance to work on my blog and touch more on some of the topics that have been intriguing me along the way. I will try to answer such questions as: Why am I drawn to this activity and on the way to Indianapolis? And, “What is the meaning of life?” Ok, I’ve been spending too much time alone in the car. But, seriously, there is a higher purpose here that I have not figured out, yet. Surely all of the coincidental events that happened to put me here and my ability to go with the flow to see it unfold must be for a good reason. I am on my way to Indianapolis to find these answers.

I have driven the Volvo over fifteen hundred miles so far on this tour. Today marks a complete week on the road for me in part two of my adventure with BAC, traveling from Vermont, to New Jersey, to Pennsylvania, to Ohio and now here. I am at Grand Park just outside Indianapolis. Grand Park is a sprawling complex of soccer fields, baseball diamonds, and The Event Center. The EC is a huge building that must be a half-mile long and houses multiple indoor recreation fields. The corps is having a closed indoor rehearsal inside. This will give the corps some experience performing where the sound may be more similar to Lucas Oil Stadium, the indoor venue of the DCI championships this Thursday, Friday and Saturday. Since the props had already arrived and been moved indoors while I was traveling this morning, I will take a nice long walk around the campus here. Right now, I am outside under the roof of a brick pavilion that serves as a concession stand, restrooms and tornado shelter. Thankfully, the weather is awesome today.

One of the topics that I want to touch on is the matter of priorities when it comes to school funding. I have been to a smattering of the schools that DCI corps occupy during the summer. I have been amazed at the athletic facilities that these schools have. Most also have a very nice auditorium. My concern is about the lack of good pianos. The Harwood High School, the one that serves my community in the Mad River Valley, has a Yamaha grand in the band room, a Kawai in the chorus room, and a Shigeru Kawai on the stage. I did not know how lucky were are. So far during my stay at several high schools this summer, I have found only one grand piano (out of tune and with poor regulation) to play. I have seen enormous amounts of investment in brick and mortar and not a decent piano. Where is the priority? These schools could have a nice piano in good repair and tune for less than what it takes to keep the grass green and mown on one field. Of course, without sports stadiums, drum corps would not have a place to perform, so I acquiesce. However, I personally get more value from a DCI ticket to see a thousand corps members play their hearts out in a drum corps competition than I do watching a couple of dozen team sports players in a football game or soccer match.

I checked in with Steve. The props will remain inside and thankfully we do not have to move them at all today. Nap time. I have found a nice shady spot out of the way between the many recreation fields. The brass sections are dispersed separately and going through regimens of warm ups that will ease me into la-la land. I will rejoin the corps for dinner and go in for the ensemble rehearsal at 7:30 PM. This will be a long night. The corps is staying at the Red Roof Inn. The Inn is full so I will encamp in the Volvo for the night. Tomorrow will be another full day of striving for perfection during a day-long rehearsal here at Grand Park in preparation for the Quarter Final performance on Thursday, the beginning of the DCI Championships. Let the Wicked Games begin!