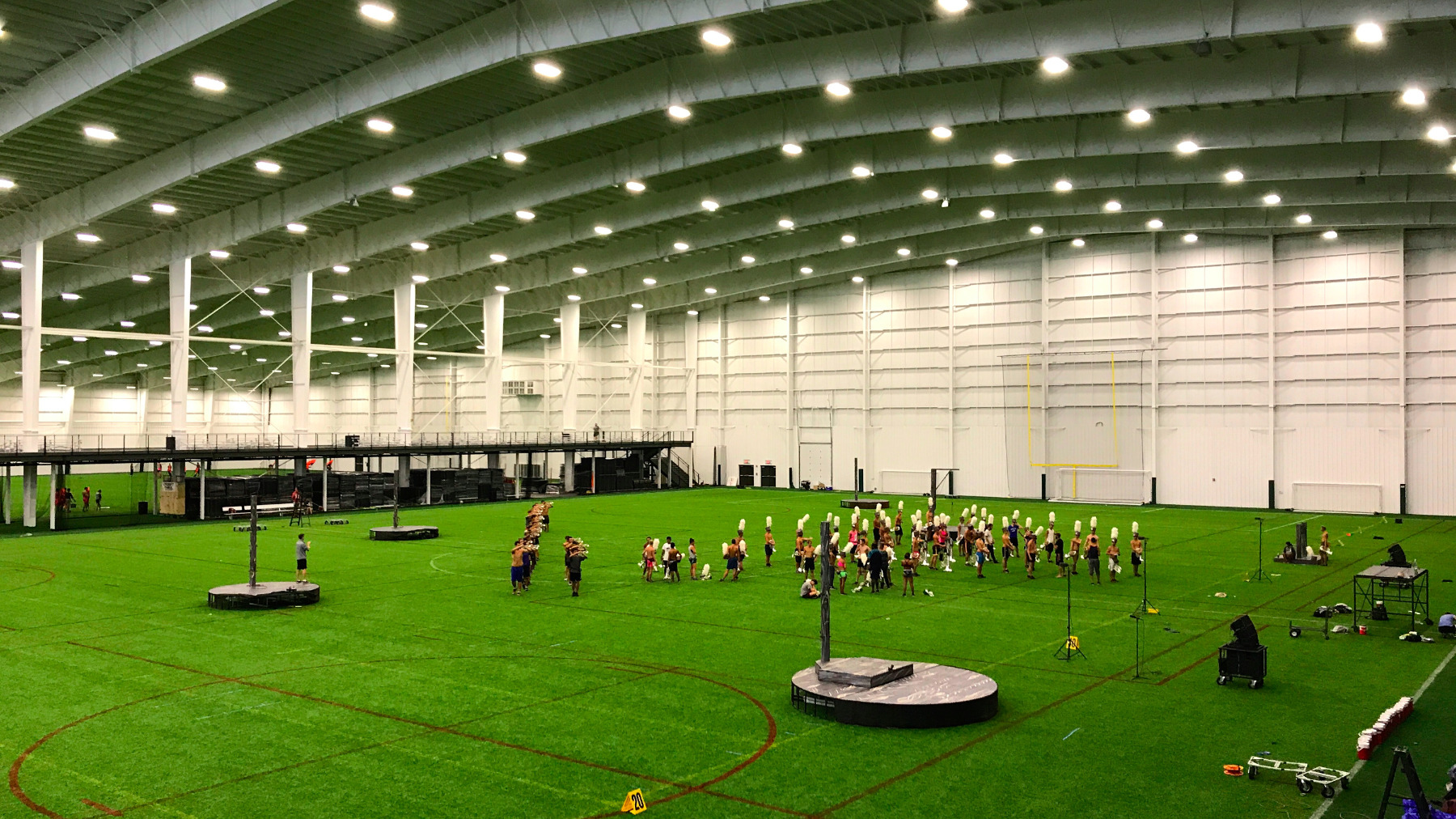 I hit the air mattress in the back of the Volvo about 10:30 PM last night. This was long before the members returned to the Red Roof Inn just outside of Indianapolis. Lights out for them was midnight. Breakfast was at 7:00am this morning. It is another fine day here at Grand Park where the Boston Crusaders are encamped for another long day of striving for perfection and tweaking Wicked Games before preliminary competition tomorrow. I took a long walk around the sprawling sports complex again. There are endless twelve-foot wide paths connecting the dozens of outdoor recreation fields. The brass sections are rehearsing drills inside the massive structure in one field and the color guard is in the other. The percussion battery and pit are rehearsing outside where they can make noise. They need to drum. I am sitting with Steve the prop guy and Jackie, a key member of operations staff. We are in the middle of the two indoor fields that are open to each other. Jackie teaches high school color guard in Medford, MA in the winter. She always has a positive and friendly attitude around the corps and her fellow staff and volunteers. She and some of color guard members are preparing the show flags while the others are in constant motion. Everyone seams to be on their game. There is that consistent positive vibe that I have been experiencing all along. This guard rocks!

With some downtime to kill, I went out to lunch with Steve. Since I had a car, we went off campus to Erika’s at the four corners in Westfield, the village nearby. After a great BBQ pork sandwich and 6 glasses of half and half ice tea, we were fueled up again and rehydrated. Steve was ready to get back to his props. I was ready for a nap. But, instead I went for another long walk, this time on the other side of the athletic field plantation. There will be an ensemble rehearsal after dinner inside. If there is a run through, I plan to record it. I am seeing some new things. This is precious time for the final rehearsals before the championships. The preliminary competition is tomorrow, the semifinals are on Friday, with the final championship competition is on Saturday. Today there are some events downtown but since I committed to help Steve with moving the props, I am here for the day. We are moving out of the indoor arena after tonight’s rehearsal. I wonder where Garry the board member is? There should be some good camaraderie this week among the many loyal board members, alumni and supporters of this fine entourage that have also made the pilgrimage to Indy. They have much to celebrate with moving up six places in the World Class DCI standings this summer.

Back home, my friends are doing their Wednesday afternoon hike – Peak-a-Week. This fun group of hikers meets at a prescribed trailhead to hike to a summit and back, usually about 5-miles round trip with an elevation gain of around 2,000 feet. Many of these hikes are on summits along the Green Mountains, providing amazing views of the surrounding countryside and distant peaks of the Adirondacks and White Mountains. Here it is absolutely flat and would take far longer to get the same workout, never fully exercising all of the muscles that one uses to hike up and down steep trails that are strewn with boulders and roots. While on my walk I began to contemplate about the scale of things. In our small community, which is clearly defined geographically as the Mad River watershed, there are four small Townships that govern the region. We struggled to pull together enough resources (and political will) of all four towns to purchase some new land for two soccer and two lacrosse fields. Here there are dozens all in a row. Keep in mind that our total population is less that 10,000, and our narrow valleys provide little flat terrain that is not already developed or designated agricultural. This massive sports complex hosts major sporting events and is leased out to leagues throughout greater Central Indiana. Yesterday when I arrived, there was no one on any fields except BAC. Later that afternoon, several little league soccer teams arrived, transforming the row of fields into a buzz of activity. Within two hours they had melted away and the fields were empty and quiet again, except the band kids who were still rehearsing. They did not get to bed until midnight. Drum corps, particularly at this level is the hardest athletic endeavor of any activity. Period.

After covering about four miles out in the direct sun, I returned inside to listen to the brass working through the book. The percussion is outside again. They had a turn inside earlier. The pit is back inside, too. They are setting up for the full ensemble rehearsal. This time, the rehearsal was more about the sound and less about the drill. Again, the brass instructors were teasing out each member’s ability to speak with one clear voice integrated perfectly with the many. The BAC brass has found a voice like they have never had. Yesterday and today there has been no slacking by members, instructors or the operational staff. I am not sure what tomorrow will bring. I have committed to help Steve and his team load and unload the props. I think there will be three times as we are moving everything from here to another site for rehearsal and then again for the competition. I hope to leave my car at the hotel and ride with the staff on the bus. We’ll see. BAC is in the final set of corps and will come on after 9:00PM. There will only be five other corps that will perform after them. Maybe on Friday or Saturday, there will be only four.

Anna the synthesizer player joins in the final conflagration.

I just met some BAC parents, Roger and Mary Ellen. There son, Brady is part of the artistic team. Brady is not here tonight because he is at the DCI Hall of Fame induction ceremony to see his mentor, Bruno inducted tonight. Roger and Mary Ellen and I talked about the creative side of the activity. They highlighted the fact that Brady’s high school was particularly strong in the arts, saw the potential in him, exposing him to multi-dimension of performing, writing and producing. I have lamented in earlier posts that not all schools are as clued in to the music programs. I am beginning to have great hope as Brady and the kids that follow him will be spreading the love and harmony of music education for future generations to benefit.

The entire ensemble is inside the Sports Center Complex for rehearsal. The sound is quite different but no less impressive. The sound waves bouncing off the hard structural walls of the building can often overwhelm the new sound that is coming directly at me. One cannot watch this program too many times. Every time they run through a segment of the program in rehearsal, I see something new. Now, I am not sure what is actually new or just something that I have not seen before. This is a very complex visual program. I find that I am more and more drawn into the guard. During rehearsal the color guard is always practicing some toss or move. They are never idle. That is why they are currently ranked third in DCI standings this season. There are several props such as gallows, stocks, and platforms that are arranged around the field where the guard members perform crazy moves to portray the tragedy of Wicked Games. During dinner Steve was working on the platforms in the rear of the field. I think he has something up his sleeve.