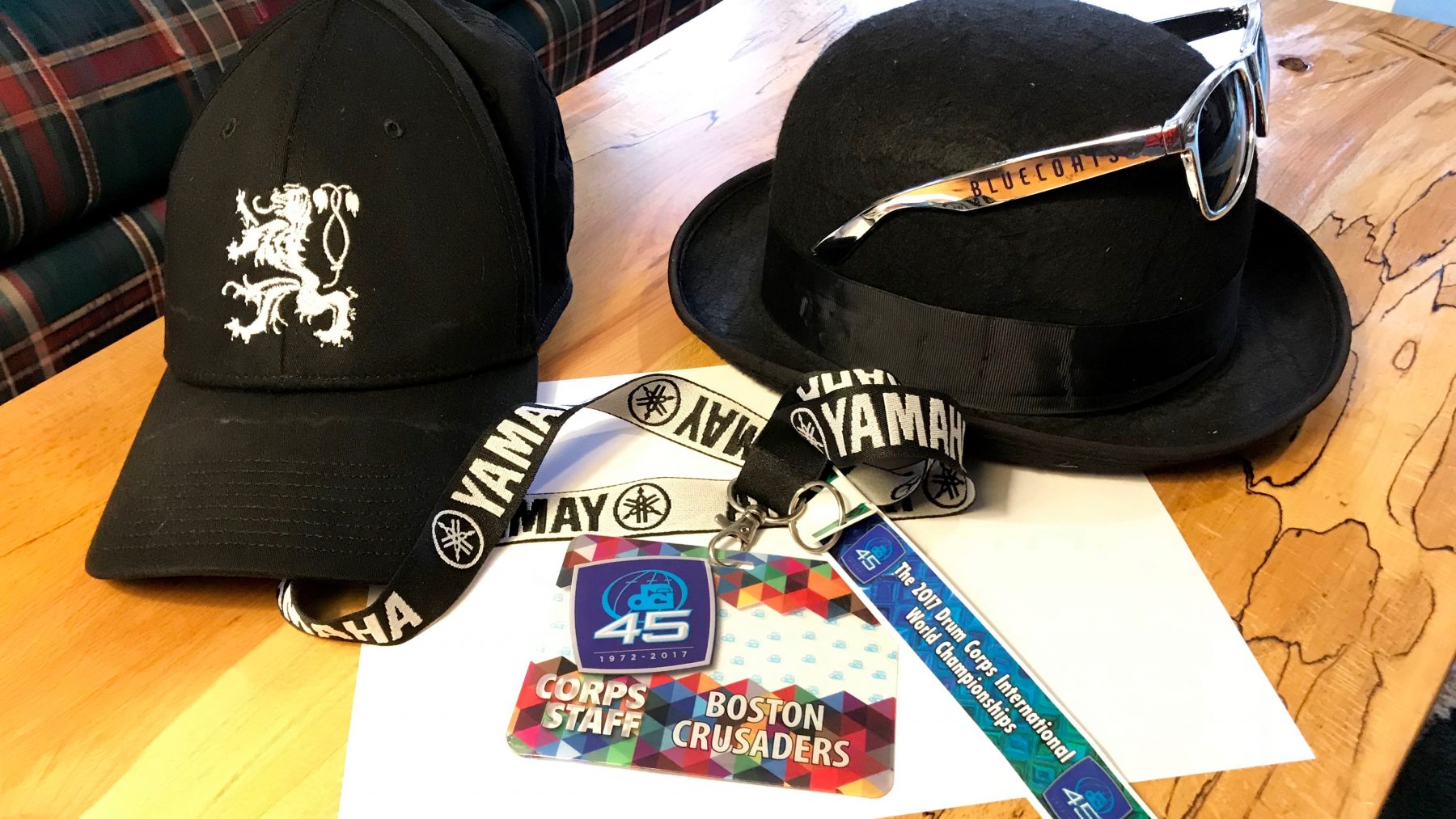 After two days on the road, I returned to my home on the Mill Brook last night after making my way back from Indianapolis. I did it in increments stopping along the way to cat nap and visit my sisters again. I passed the BAC souvenir truck on Ohio I-70. Greg, another one of the amazing volunteer board members that I have met, was driving. I tooted as I passed and hoped he noticed the Waldo decal on the back of my car. He was not only driving the soivee vehicle and trailer back to Boston, but also flying home to Scotland. From top to bottom, BAC organization is filled with totally dedicated individuals.

This morning I had some moments when I would start crying again. I was catching up on Facebook posts and forums, and watching YouTube videos of the final performance of BAC. It is now clear to me that this summer’s adventure with BAC was meant to happen. In my small way, I was part of an incredible achievement. Wicked Games will go down in BAC and DCI history for its success in advancement in rankings, but more importantly for its success in reaching in and pulling the heartstrings of the drum corps fans and critics at large. I have not been alone in how this corps and show has gotten to me.

I keep going back in my mind to some of the unsung heroes that I met – the prop crew. Joyce and Will, husband and wife, headed out on finals night for Boston with the prop truck and then flew back home to Florida where they will focus on teaching and hauling props for a winter guard program. Chris, Austin, Jamie, Jim, were the steady volunteers and interns who toiled daily getting the props on and off the trailer among the thousands of other things. I am not sure where they were headed or whether they are coming back next year. This was surely a good year to have on their resumes. It was good to see Robert and Darren, two staff members that I met during my tour in June, with the corps for finals in Indy. Mike and the other drivers also hit the highway the day following finals. Anthony the chef, Mary-Mason the intern/volunteer coordinator who got me into this, Ron the corps co-director who kept me on board and invited me to join the corps on the field at finals, Vivian the doctor, Steve the prop guy, Gino and his awesome staff had all disassembled. We had all spread out to get on with our off-season lives. The entire entourage that had toured together for three and half months had exploded into hundreds of pieces traveling in all directions. 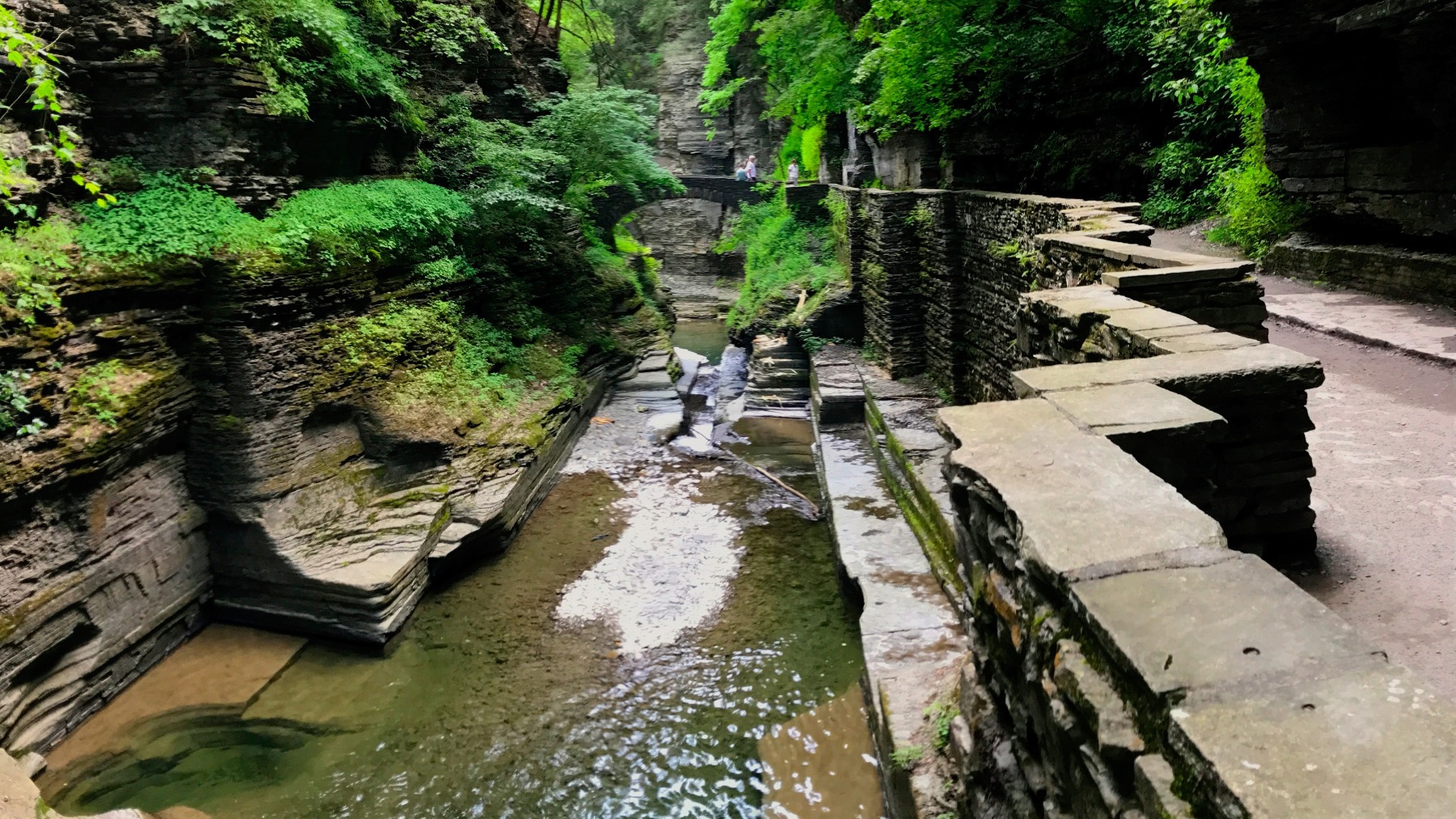 The Rim Trail at Treman State Park, Ithaca, NY, built by the young men of the 30’s.

On Monday, I arrived at my sister’s house in Ithaca, NY in time for lunch. Did you know that DCI held its third World Championship in Ithaca in 1974? After a banana, peach and peanut butter sandwich, we ascended the Rim Trail at Treman State Park for a nice hike. The next morning, I headed up to the Cornell Campus on foot to seek out that Steinway piano in the chapel that I played the last time I was there. The walk uphill was invigorating. It was another beautiful summer morning. How lucky I was to have had such great weather. With the exception of the rehearsal that was rained out in Clifton, NJ and the one rain event that drenched the prop crew on semi finals Friday, the August days have been bluebird. Following a nice session on the piano in the chapel, I headed toward home.

I took the road less traveled and turned off the navigation. I have found that whichever navigation app I use, it tends to divert you to the super highways. I sometimes prefer the road less traveled, a nice well-maintained two-lane country road that will keep me engaged as the driver, and provides much more scenic enjoyment. I knew the way along the meandering road that took me in the vicinity of a good friend that I have had since grade school. It was time to atone for missing my 45th high school class reunion. My heart sank when I heard that they had chosen the weekend of the Allentown competitions for the class reunion. This caused some emotional baggage that traveled with me all summer, since I was the senior class President. Dan was very understanding, but he made sure to tell me that I missed a great time.

I fear that this final post reflects the anti-climactic feeling that I have been having these last couple of days following finals night. The journey that started back in mid-June in Castleton, Vermont at the community night and the first full public run through of Wicked Games has ended back at my humble home on the Mill Brook after two tours of the Midwest to follow the Boston Crusaders. How can anything that I have planned going forward from today be even close to as interesting and rewarding as this experience.

I asked a lot of questions along the way (and found some answers) such as, “Why did I do this?” I know one thing for sure. I have a much more optimistic outlook on the future having been witness to this thing called Drum Corps. How inspiring it has been, seeing up close the talent and dedication of thousands of young individuals from the many corps, and the equally dedicated volunteers, support crews, educators and leaders, all working together toward perfection to provide a truly exceptional entertainment experience and compete for the highest placement. Being with BAC at the beginning, and then through to end, I was witness to the transformational effect this has had on the members. It is clear to me that they will carry forward, with a rippling effect, the fundamental value of working hard together toward a greater end, and we will all be better due to their exponential impact. Being a small part of that transformation has renewed my spirit and made me a better person.

I recall the words of Ralph Waldo Emerson – “It is one of the most beautiful compensations of life that no man can sincerely try to help another without helping himself.”

Questions still linger. I wonder if all of the other drum corps fans are feeling the way that I am right now. How will I get beyond drum corps season? I am glad to be home, but somehow, I feel sort of homesick. Is the season really over and that was a final good bye in Indiana, or will I have some continued contact with those that I have met? Will I do this again next year?

As you know, I love all of the corps. Among the mementos that I have from my trip is a genuine Bluecoats bowler, which was gifted to me by the Bluecoats prop colleagues on finals night. (Probably a rehearsal hat, it has bright green duct tape inside with the initials CEE.) However, did I have a favorite corps in 2017? Guilty. Along with the memories, I have my Boston Crusaders DCI security lanyard and wrist bracelet from finals night. What a privilege to have become a small part of the Boston Crusaders family for 23 days and being on the field with them at finals night, especially on such a resurgent year.

It will be a long, long off-season to think about these questions and ruminate further. Today’s scheduled hike with the Peak-a-week club is General Stark Mountain, one of the Green Mountains in central Vermont. It is the headwaters of the Mill Brook. With a coolness in the air, it is a perfect afternoon for a hike. Ski season is just around the corner. It’s time to move on for now.