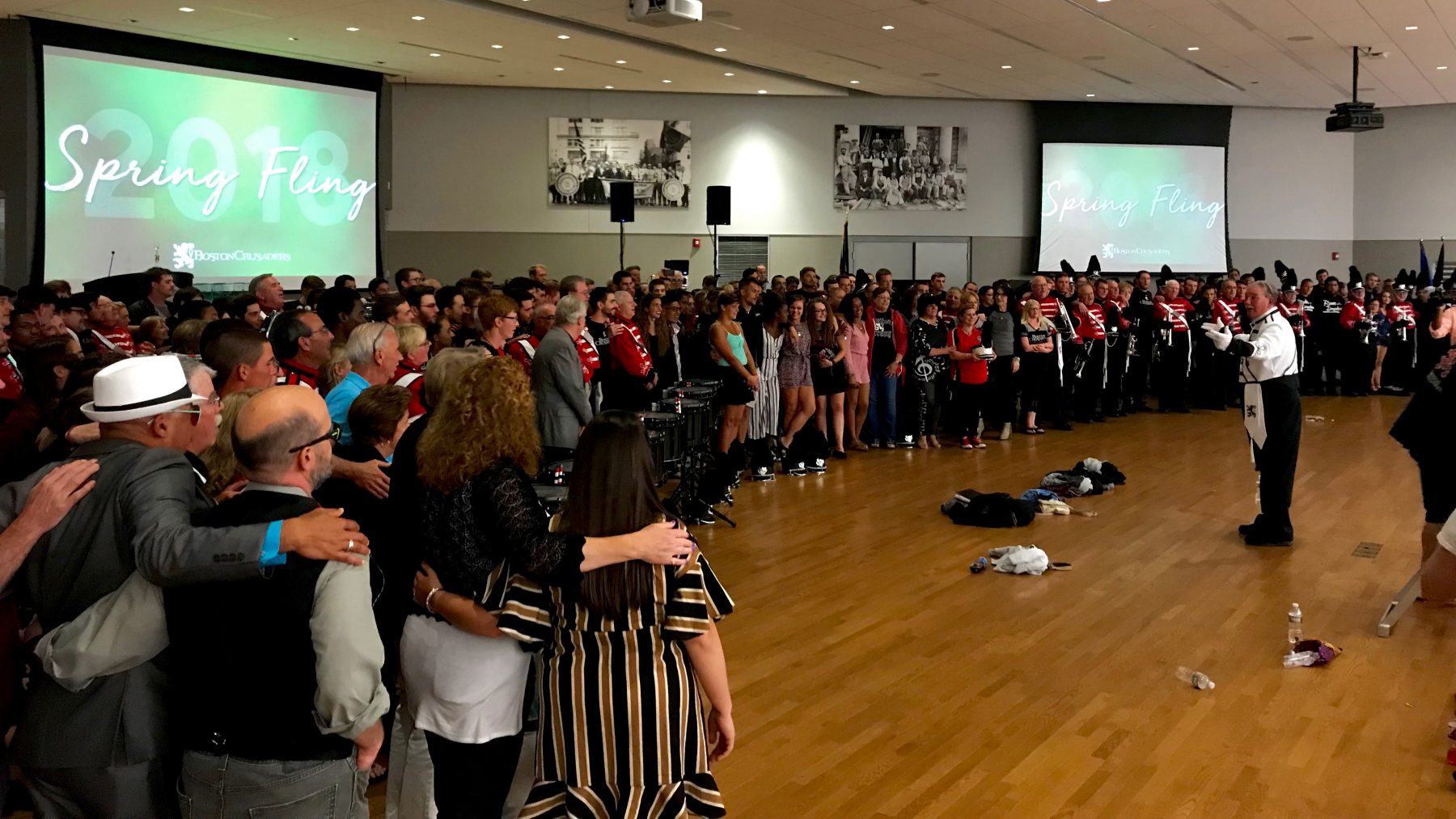 The BAC family in Boston for Spring Fling.

I have never witnessed so much love in one room as I did last night at the IBEW Local 103 hall in Boston. OK, Dorchester. This was the site of Spring Fling, the annual celebration of the beginning of drum corps season and send-off for the Boston Crusaders Drum and Bugle Corps, as they are embarking on their summer tour. The hall was filled with people spanning multiple generations. No wonder, with an organization that has had such a proud, seventy-eight (78) year history.

Spring training wrapped up the day before in Castleton University. No doubt the corps decamped leaving no trace of their presence but perhaps in the memory of the Vermonters who were so impressed by them on Community Night. There was surely a financial benefit to our small town and State University. Thank you.

The evening began with a performance of the Crusaders Senior Drum and Bugle Corps. This all age, alumni corps is highly competitive in its own right. Senior is the apt moniker, as octogenarians played with equal enthusiasm to their fellow members. Led by the enthusiastic Jack Laselva, the corps played old standards much to the delight of the knowing audience that included the much younger performers seated on the floor in front – the Boston Crusaders Drum and Bugle Corps, the World Class division DCI Junior Corps, 6th place finishers in 2017. I was struck by the generational divide in age, but also by the unity of spirit, as the kids had the most enthusiastic responses. And, later they responded rousingly with their own renditions. 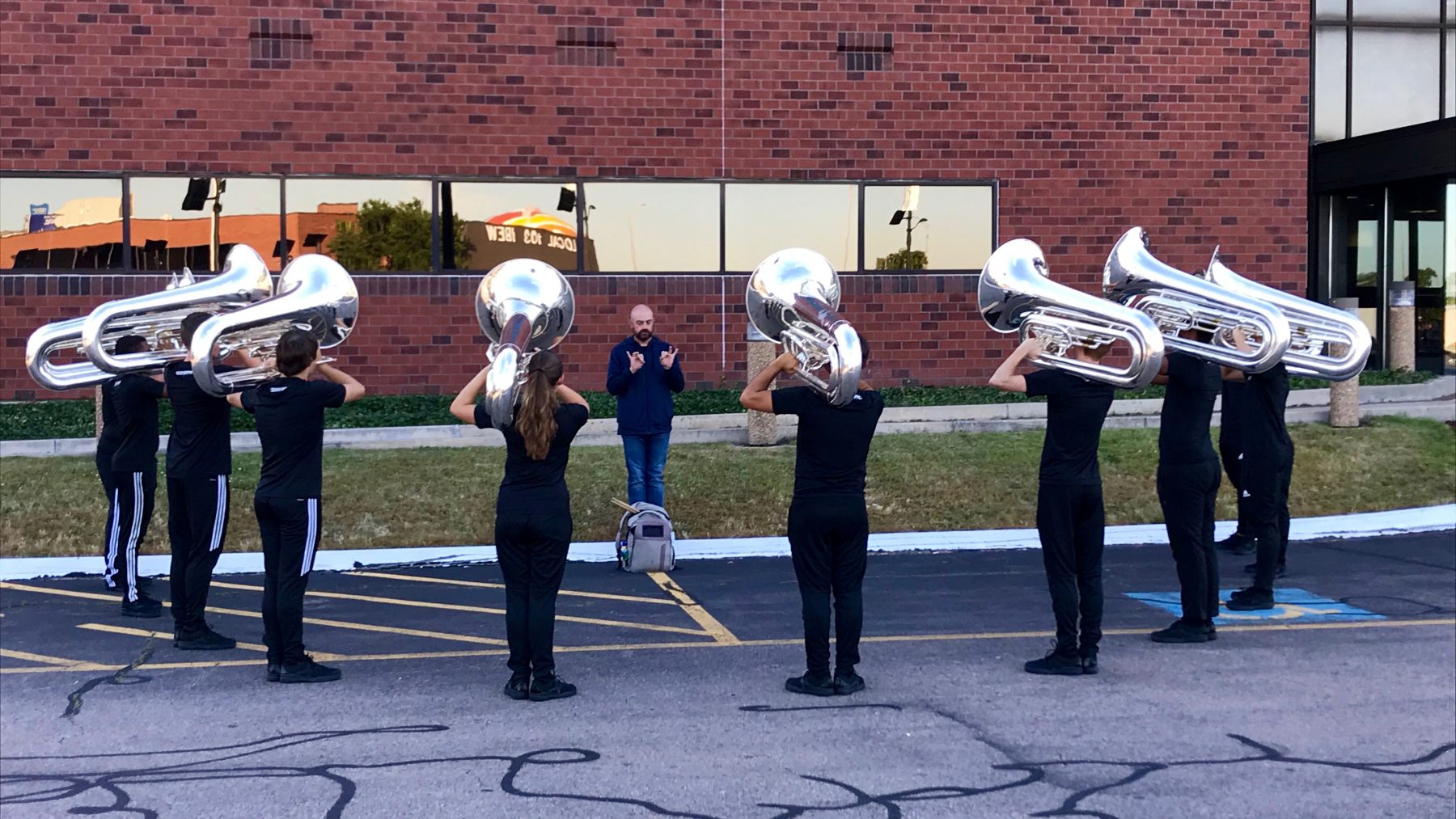 The junior corps had arrived in Boston the evening prior and set up camp at Emerson College in downtown. What a contrast to their bucolic springtime home in Vermont. That evening, they performed with their sister Open Class corps, the 7th Regiment at Concert in the Park in downtown. This open-air, standstill performance of the Corps has become a tradition in its own right and a major acknowledgement of the strong corporate support that Inspire Arts has garnered through their broad efforts in youth music education in the region. At the reception following, I was happy to reunite with others that I had met on my tour last year including Vivian the doctor, another amazing BAC angel.

When the senior corps completed their presentation, the junior corps joined them, with all of the alumni in the room, up front for photos and singing the corps’ song – Giant. Embracers young and old beamed. That trigger linking my brain and eye balls was pulled hard. I began to think about all of the other great organizations across the country that are undergoing similar traditions and celebrations, and how the accumulation of love in the month of June must rival the bookend-month of August in this great activity for highest emotional charge. That enduring sense of hope continues to be replenished in me by this experience. I remarked to Garry, the board member, and now my adopted drum corps brother, how this grand room is like a love fest for the corps. He replied, with a wink, “It’s the womb.” 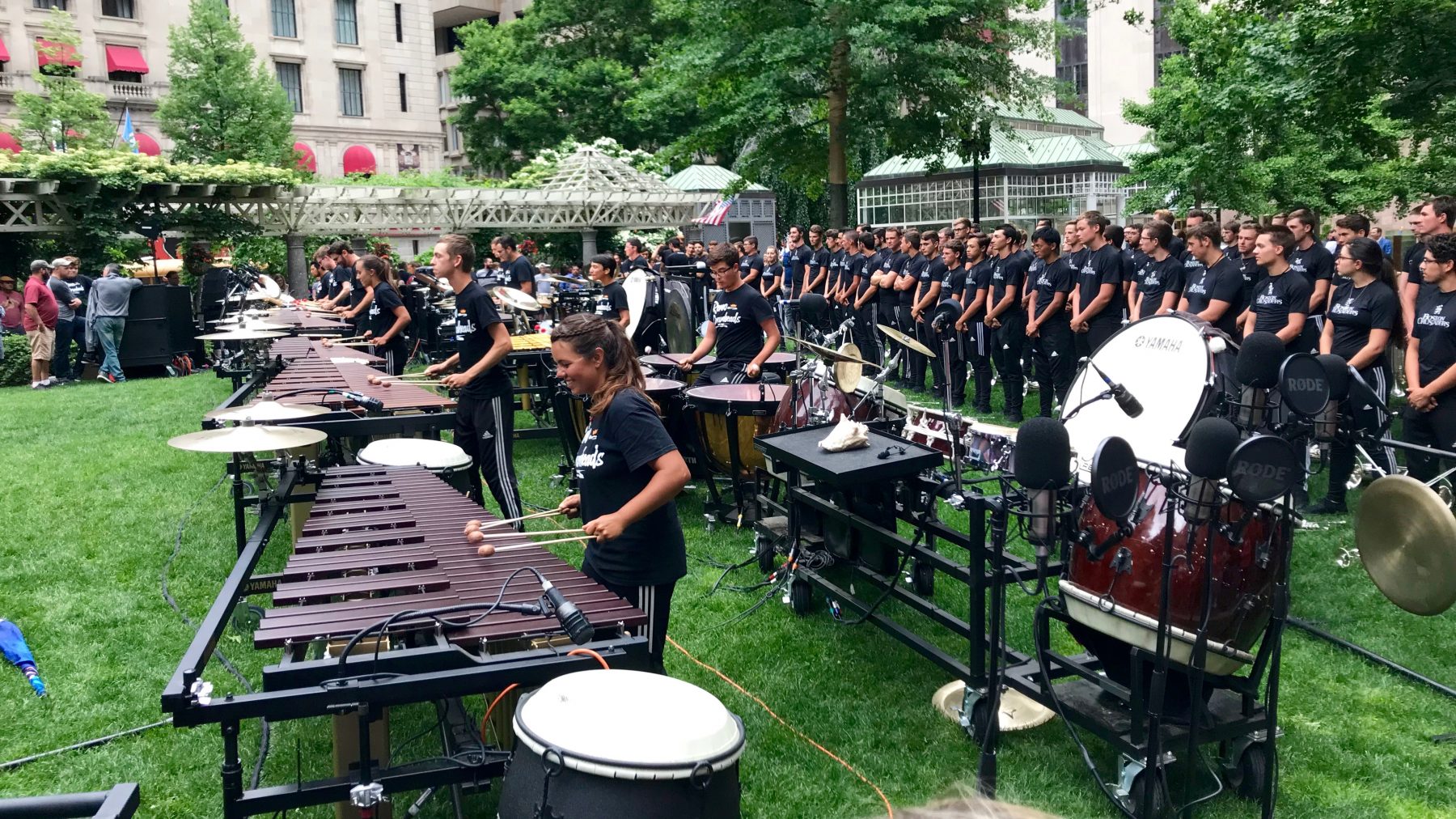 The Pit warming up the crowd around the Norman B. Leventhal Park.

Mike, the Chairman of the Board of Inspire Arts (and Mohamad Ali of fundraising) along with Chris, the Executive Director, presented volunteer awards and inducted new members into the Corps’ Hall of Fame. This laborious task is necessary but long, due to the overwhelming number of people, alumni and not, that commit unbelievable amounts of personal energy and talent to make this thing what it is. And, there are so many unsung heroes behind the scenes. I challenge DCI to quantify the social capital and equity of volunteerism and donations that goes into supporting this uniquely-unifying American performance activity. Love and dollars go a long way here, serving so many, and the story needs to be told.

When the kids had their turn, the anticipation was stunning and it was breathlessly quiet with the opening of the standstill performance of S.O.S. I’m now calling them moose bumps, because goose doesn’t quite cut it anymore. Gloss-coated eyes observed the awestruck BAC family as the roof lifted, settle back down, and then blew off by the combined cord, clatter and clapping as the emotionally charged show reached its closing frontal delivery of power. I wondered if this might have been detected by a seismograph, or some other scientific instrument being developed at MIT just down the road.

With that ending, this author took leave of the event, as I had miles to go before I slept, with the long drive back to Vermont. As I left, the corps was loading the pit into the equipment trailer, and the buses and trucks were idling in anticipation of the members embarking on the long journey to Detroit for the opening DCI show. As far as I can tell, they are as ready as they can be. The very successful spring training camp with the love of my fellow Vermonters, and the great send-off they received by the BAC family in Boston is a great catapult. The program is solid and the kids are amazing, portending a continued rise. Let us not, however get too far over our skis (which I have been known to do, literally). Let us not underestimate what the other great corps in the west, mid-west and south have been up to. I, for one, love all the corps and cannot wait to see what they are bringing.

Since I will not be traveling with the Boston Crusaders this year, I will not see them again until they return to Lawrence, MA on July 1st. I will be bringing more Cabot cheese for them and will be sitting in the stands at the 50-yard line with my hanky in hand. Will I jump on their bandwagon for the New England run? I’ll keep you posted.