The Boston Crusaders Drum and Bugle Corps in the arc for encore at their home show in Lawrence, Massachusetts.

After what seemed like an eternity, I reunited with the Boston Crusaders Drum and Bugle Corps yesterday in Lawrence, Massachusetts. They have been on tour since mid-June, competing in shows in Michigan, Wisconsin, Indiana, Ohio and Pennsylvania. After the great send-off in Boston, the corps continues to stake its claim within the top corps in the activity, ranking in solid 5th place in the Drum Corps Planet after the shows around the country yesterday. Last night the corps increased its previous total score by over three points. So far, the 2018 season is getting off to an even better start then last year when I had the privilege of touring with the corps during the June shows.

As the home show for the Boston Crusaders, the corps has been encamped at the Lawrence High School, which was next to the stadium of last night’s show. The entire Crusaders family, including the Board members of Inspire Arts, Inc. were on hand to help organize the show. I got pulled into helping to park the prop trucks during the first half of the show.  Once that work was done, I ascended the stadium steps to my fifty yard line seat and settle in to be impressed by the World Class Corps. And, impressed were we, me and my seat partners. Clearly, the crowd favorite was the home corps, but plenty of love was shown to all the kids who stepped onto the field.

As a fan of all of the corps, I have been anticipating seeing a live show again after the long off-season. Though I am grateful to all of those who have posted content on the internet, seeing a show live is like being struck by lightning as opposed to receiving a new carpet shock seeing it on my screen. The expanse of the outdoor stadium with the attending audio and visual largeness is a feeling lost at home or even in the large format cinemas that showed the Premier competition held in Detroit.  However, I drove three hours each way to see it in the closest theater in Albany. And, I was glad I did. You know you are a drum corps nut when (you fill in the blank) _________.

This homecoming was also a chance for me to check in with board members, staff and volunteers that I have become acquainted with through me association with the corps. Steve the prop guy was handling the usual challenges of smoke, fire and hardware. The foodie volunteers and staff are pumping out three meals a day plus snack to the thankful hundreds of cast and crew of S.O.S  (the Crusader’s 2018 program). This week, snack includes single servings of Seriously Sharp Cheddar Cheese, generously donated by a new sponsor, Cabot Creamery that I delivered to the corps straight from the factory in Central Vermont.

Following a trip to the hardware store for Steve, I attended ensemble rehearsal today. Man, it is hot! With temperatures in the 90s, the heat index on the field approaches 120 degrees. The pale skin of the members at spring training has been bronzed by the hundreds of hours that they have rehearsed in the sun since then. Frequent water breaks punctuate the intense drill work. Drum corps at this level is not for the feint of heart. These kids are not only highly talented artists, they are extreme athletes, enduring day after day and night after night of rigorous practice. Observing this dedication alone is enough to instill a great sense of hope for the future. If you think the world is downside up these days, go to a drum corps rehearsal and you will feel better about the capable hands that will shape the future in good ways – the band kids’.

Tonight, I am going to another show in the Boston area with the repeat line up of corps. I fully expect to see more nuances to the shows and catch some things that I have been missing or that are newly added. You cannot see a program too often. This will surely be another fun evening amid the locals in the stands who will be rooting for their home corps. I will be standing up for all the kids.

I am sitting here at the Bristol shore on the campus of Roger Williams University enjoying a cooling breeze in the shade. It is still hot and muggy everywhere else. The air smells sweet from the ocean and the honeysuckle lining the shore. College campuses are great places to hangout while traveling to drum corps shows. Most campuses make great walking, have wifi, power, bathrooms, air conditioning, tables and food. This beautiful campus is no exception. The Cadets are encamped here and rehearsing on the soccer field.

I was shanghaied last night by some of the Boston Crusaders Drum and Bugle Corps staff after the Lynn, Massachusetts show and encouraged to follow the corps to Rhode Island. When I found the trailers after the show, I stepped in to help the members by directing traffic away from the area as they folded the large beachfront tarp that is used along the right end zone. They really don’t need my help, but I think they like me being around and always ready to help, especially with some needed local transportation. Yesterday before the Lynn show, Steve the prop guy needed some hardware, thus I rocketed across the landscape at breakneck speed in my 3,000-pound vehicle to pick up a box of nuts and bolts. This is the American way, like it or not.  Any delusions that I might have had about our ability to curb our auto-centric lifestyle have dissipated, at least for a generation. And, don’t even think about a drum corps reducing their carbon footprint. The fleets are getting bigger and the tours are getting longer. Maybe there is hope, however. Let’s try to reduce the carbon footprint and improve the health and well being of the members by first instituting a “No Idling” policy at DCI events. Ask the members for their thoughts on this and other ideas they may have. 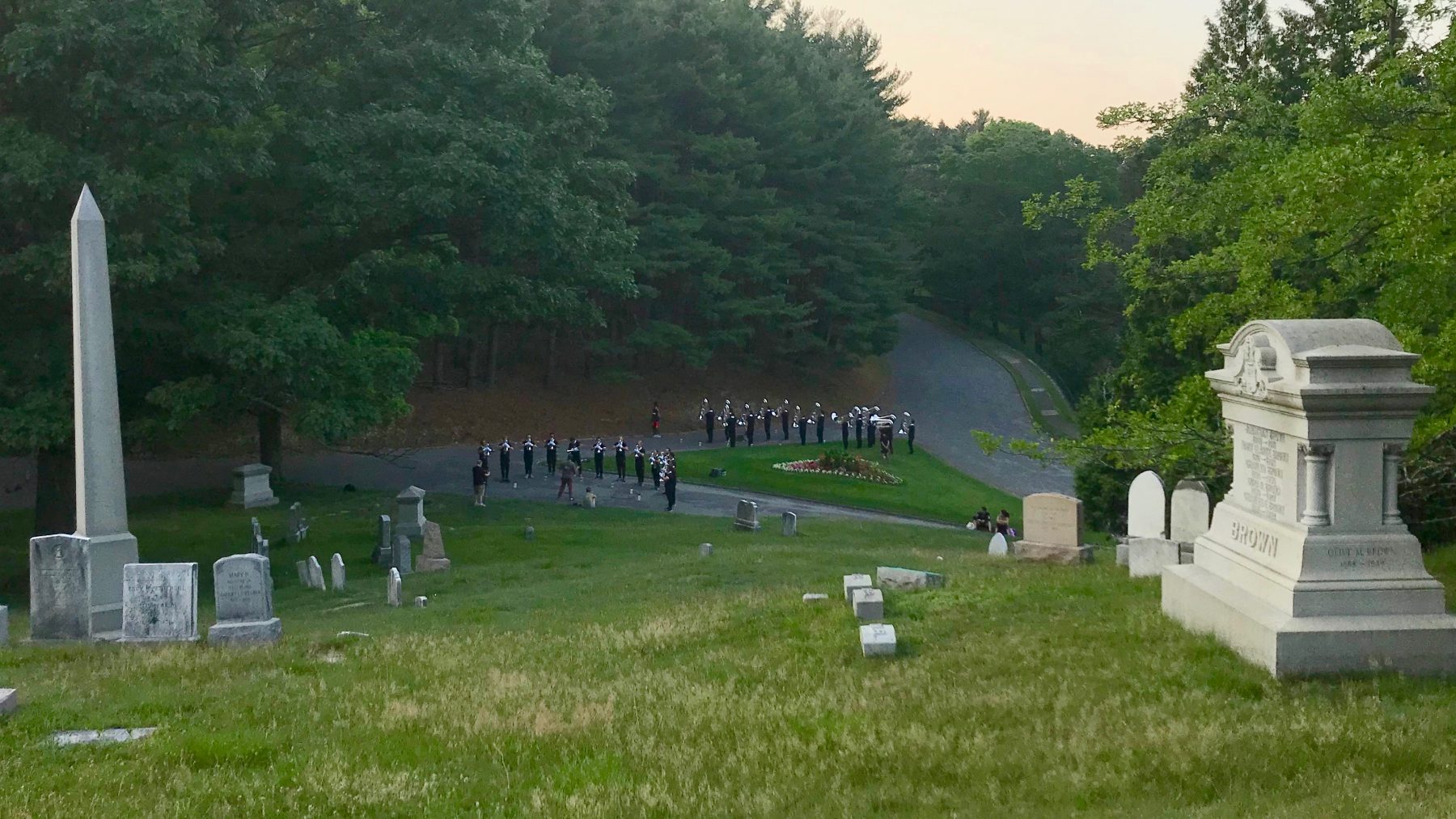 Now for the good news. The Boston area was treated to another great drum corps show last night and the kids from all of the corps really played their hearts out. It is amazing to see the improvements even from night-to-night. I spent the early part of the show outside the stadium, including in the nearby cemetery where the corps were warming up. If there was a sound ordinance on the grounds, it was clearly violated by the sections of percussion and brass scattered amid the tombstones. Though I did not see anyone rise out their grave, they were surely aroused. 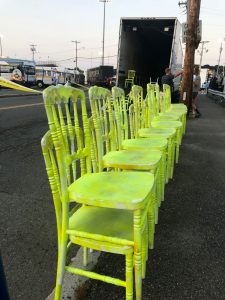 Returning to the stadium, I walked along the service road lined with trucks, props and kids in their colorful uniforms. Maybe the word uniform is passé, as they are more like costumes today, each year changing to fit the program. It is almost impossible to identify a corps anymore by their so-called uniforms. As I was passing by the Bluecoats assembling their regalia along the curbside I was impressed by their happy spirit and conviviality. Certainly leading the activity in scoring helps. They were dressed in their similar but all uniquely different uniforms (anti-uniform) of lavender, lilac, mauve, blue and grey tones, with infinite combinations of plaids and solids. The early evening glow accentuated the pleasing hues. 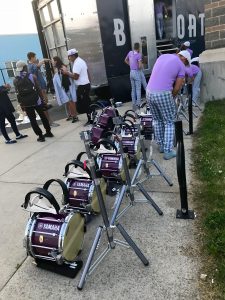 I struck up a friendly conversation with Drew, a mellophone player. He said that the kids are really enjoying performing their show and he looks forward to getting up and working hard every day. He had an interesting combination of confidence and ease about him that is indicative of the attitudes of many corps members that I have met. I believe this comes from the exceptional character of these kids before they join a corps that is compounded by the experience of working and struggling hard together with their many sisters and brothers. The individual strives among the many for the greater good and is a better individual f 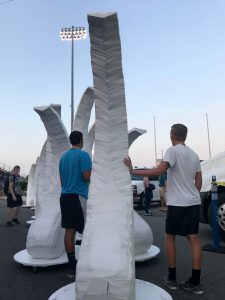 My drum corps season is off to a good start. Tomorrow, I will be attending the Independence Day Parade and then it is another long wait until my late-season tour that begins at NightBeat in North Carolina on July 29. Meanwhile, I’ll keep you posted along the Mill Brook.