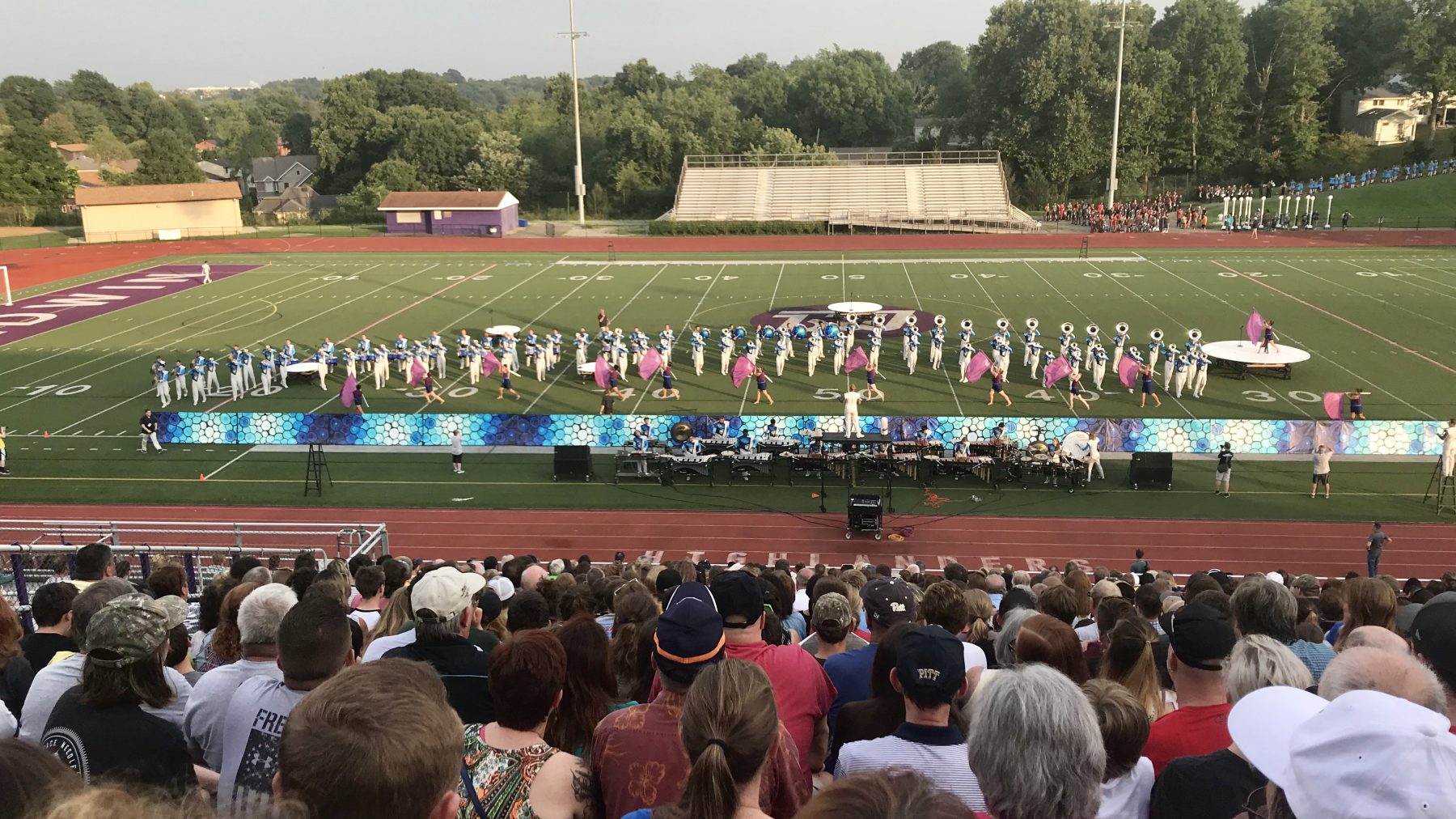 At the fifty in Baldwin High School Stadium, Pittsburgh.

I am at Bobby Rahal Volvo in Wexford just outside Pittsburgh Pennsylvania, taking some time to get caught up on my posts. I arrived here by pure providence early this morning around 1:00am. Old Grey finally gave up her tired old transmission first pulsing, then shuttering and bucking. Easing him over to the shoulder before he reached the final slipping point, I pondered my options. First I cleaned out the glove box and center console of the misc. items and stowed them in my pack. Next I decided to try my luck at finding a place for assistance before I called AAA. Lo and behold, this large Volvo dealership was within a six-minute drive. Thinking that perhaps the Ghost had one last gasp, I started him up and limped him along the interstate to the next exit and slowly cruised here. The fateful timing of the breakdown has landed me in a good place. I pulled into the back lot, rolled out the sleeping pad and went to sleep thinking positive thoughts. Beforehand, I had researched their inventory and realized that I had some options. Fix the old boy and rent a car, or purchase a new car and abandon him here. He performed good service while he lasted, but I thought I would get at least another year out of the car. Purchasing a new one is appealing because, hey, I might not get another year out of me. As a cancer survivor, you never know. And, there is no way in heck that I will miss the Massillon DCI show tonight and finals later in the week in Indianapolis. Around daylight, I arose from my slumber at 5:30 am and decided to clean out the car. While dropping a bag of garbage into the dumpster, I noticed a man in a white shirt and tie on his cell phone out front. I gave a friendly wave and walked over to him. Jim is the service manager who arrived early today. After explaining my dilemma, I am now in his capable hands.

I arrived at the show in Pittsburgh a little early so I checked in with Rachel and others at the Carolina Crown food trailer out back of the Baldwin High School, the show site. Everyone thanked me for the cheese that I dropped at the housing site near Allentown the other day.  I also had the opportunity to meet Ben, brother of Matt. Both are brass instructors. I congratulated him on his championship horn line that is currently in first 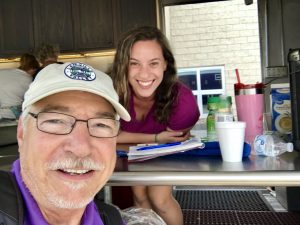 The author with Rachel, of Rachel’s Roadside Kitchen.

place in the rankings. I also had time to cruise the lot and check out the corps disembarking. Only one out of ten trucks was shut off. The constant rumble and smell of the diesels permeated the air. I wonder if some day these big machines will be all electric. At least maybe we can curb the idling to improve the air quality and serenity of the area of the highest concentration of young healthy individuals. Perhaps it is not practical or too expensive but drum corps can do better. Water and air should be free and free of pollutants. 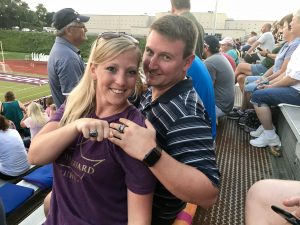 It was great to attend this show that has some of the corps that I have not seen yet do to the rain out in Allentown on Friday. All of the World Class corps have programs that impress heavily with their late season level of performance. I am loving my seats this year! My seat neighbors have been very cool drum corps fans to enjoy the shows with. Last night I met another incredible Crown family, the Ciocca’s – Rachel a Crown Champion 5-year color guard member and her mom and dad, Darlene and Kurt. To my left, a young lady and her grandmother enjoyed the show together. This was her (the young one) first show and it was fun to see her reactions. I was sure to give them one of my bottles of purified water as they were unprepared. Sitting in the stands and looking around at the drum corps fans is a refreshing experience. We are an amalgamation of many stripes, all bound by the enthusiasm of the great endeavor. When the entire standees react to a movement or sound, it is thrilling beyond words. There were many of those moments by the fans at the Pittsburgh show. I need to sign off for now and find out what the story is with my car.