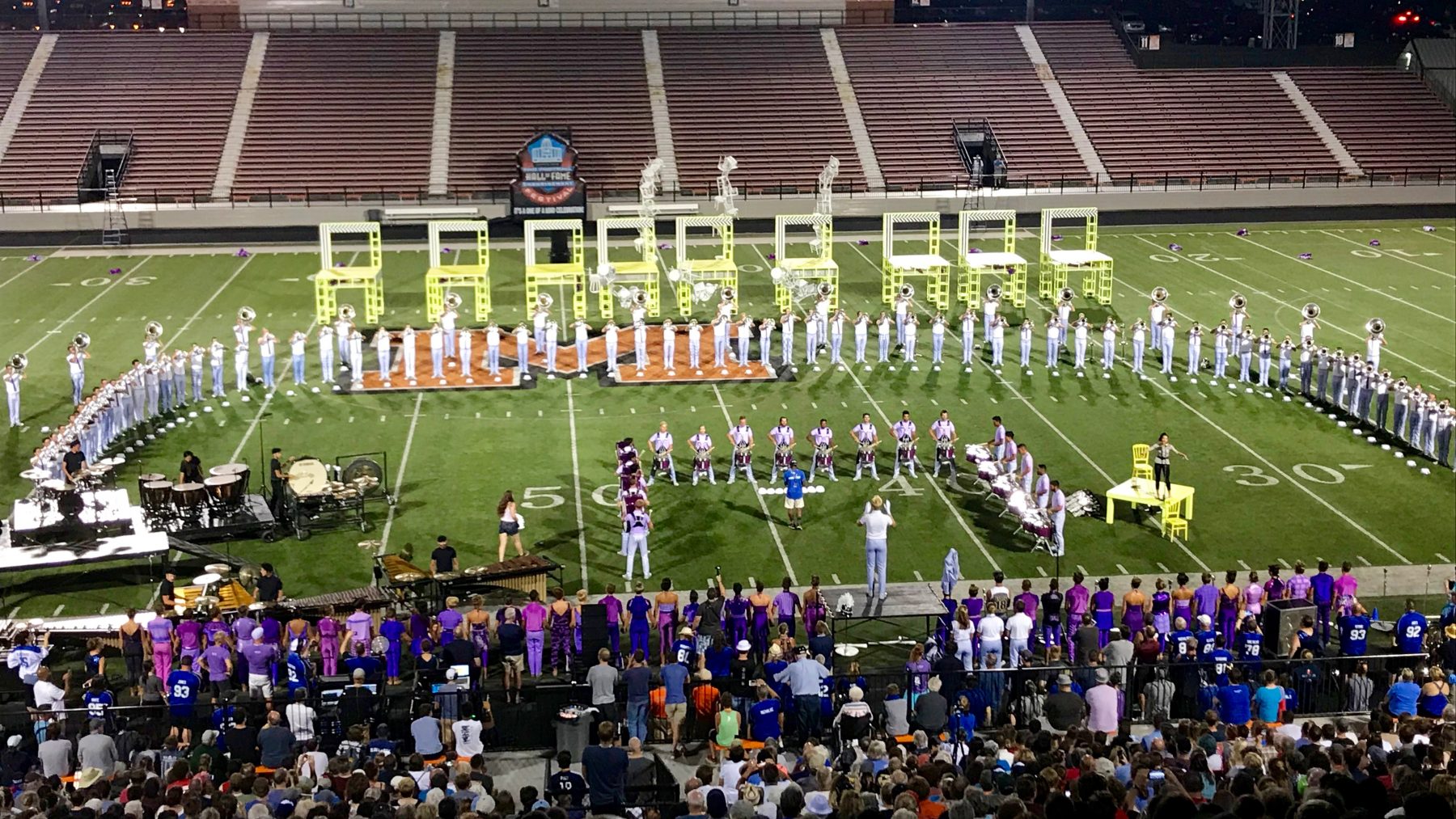 Bluecoats in the arc for their popular encore performance.

Tour of Champions – From the Fifty

Oh, what a great night for drum corps it was last night in Ohio! Eight awesome corps entertained the full house crowd in Paul Brown Tiger Stadium in Massillon for the last DCI show of the regular season before the championships later this week. Yes, I finally made it to the show after losing my car the Grey Ghost to a failed transmission the night before. By sheer providence, the breakdown occurred within a six-minute drive to a large Volvo dealer in Wexford, Pennsylvania. Since the transmission still had some life, I was able to limp it there at 1:00am and spent the night in the car in the back lot. Jim, the service manager had arrived early and welcomed me inside. I gave Jim my story and he and the team at Bobby Rahal Automotive Group went to work on diagnosing the problem and providing me with options. Unfortunately the old Ghost and I departed ways in Pennsylvania. After some negotiations and the great work of Michael, Brenda, Branden and Jim, by 1:00pm I was on my way to the Massillon show in my newer Volvo wagon, the Silver Bullet. It pays to have good credit. 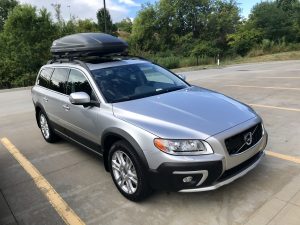 Meet the Silver Bullet. May the Grey Ghost rest in peace.

2016 Volvo XC70 – $33,000. Getting to the best outdoor show in drum corps – priceless! I had the best seat in the house at section 5, row PP, seat 35 – the epicenter. Many of the corps’ sound techs and instructors head up to the center aisle to watch their respective corps and tweak the sound to the stadium. They stand next to me at the top to watch with pride as their members perform the show that they have all worked so hard all summer long to perfect. This provided me the opportunity to introduce myself and congratulate them for there success. I am certain that each of the corps turned up the volume a couple of notches at this show. The awning overhanging the top part of the stands has a magnifying effect, pumping the sound forcefully into the pleasure center of my brain. There is no question that the fans favorite corps at this show was the Bluecoats as it was their home show. And, they blew the roof off! Following the show, the Bluecoats performed an encore presentation to the delight of the loyal local fans. You have to hear Paul Simon’s The Boxer in person to fully appreciate the power of the Bluecoats horns. And, of course, they played the age-old favorite and unofficial corps song, Autumn Leaves. 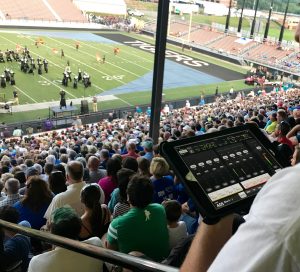 Equalizing the sound, maximizing the pleasure at row PP.

As I departed the stands I could not help but observe the trash receptacles overflowing with plastic water bottles. This show was a sell out and the weather was hot. Once again, I began to wonder how DCI could work on a plan for a more responsible and sustainable way for the fans to remain properly hydrated during the hot summer nights. Bottled water is 750 times more expensive than tap water. According to the International Bottled Water Association (IBWA), the average cost per gallon of consumer quality bottled water is $1.50, while the cost of tap water is $2 per every thousand gallons, according to the U.S. Environmental Protection Agency (EPA). Let’s come up with a plan to mitigate the impact of the discarded bottles, including the transportation impact, and save us a ton of money in the process. What better organization to get behind such an initiative than DCI. As there some members out there who want to take action?

After sleeping in the car the night before at the car dealer it was great to have a hotel room in Canton and some downtime to start posting my drum corps musings. So after a good night sleep, a shower, breakfast and some writing time this morning, I am ready to hit the road for Indianapolis for the DCI finals later in the week. It is a good feeling that I no longer have to worry about my car. I am a little concerned that I now have a car payment again. But, that’s just a budgeting issue. I will deal with that when I get back from my drum corps odyssey. For now I am going with my old motto as a former traveling salesman – “caffeine, cruise control, and rock n’ roll.” I’ll post again from Indianapolis.

I finally arrived in Indianapolis yesterday evening. Siri and the Silver Bullet did a great job navigating and traversing the western Ohio and Indiana countryside. We took US Route 33 as an alternative to the massive truck routes of the Interstate Highway System initially proposed by the navigation systems. I find that adding an extra 20 minutes to the 6-hour route is worth it for the less stressful driving experience of these less traveled routes, and that has made all the difference. Given that I had an extra day to kill, I am glad that am here with time to get in a long walk and then catch up on my writing. The only downside of this tour is that I am not getting any serious mountain hikes in due to the flat terrain. My friends back home are doing the Peak-a-Week series of hikes in the Green Mountains on Wednesdays and others in the Friday Outdoor Group (FOG) are doing some sort of outdoor adventure on Friday afternoons – Vermont’s unwritten weekly holiday. I have been mostly sitting on my butt driving the car, getting out of shape and gaining weight. One thing I have been doing to mitigate this is taking a break periodically a rest areas. It is not quite a half-mile around the standard US Highway rest area and takes about 15 minutes to walk the perimeter and use the facilities. Since I hike or walk everyday if possible, I have had to seek out different places to do it so that it does not become boring. So, each day is a new adventure on a new trail or route. This morning I researched trails in the Indianapolis area and found the Central Canal towpath just off Meridian Street north of downtown. Indiana has a rich history of transportation improvements including a significant canal network that provided efficient commerce and communication prior to the advent of America’s railroads. The towpath of the former canal provides an idyllic walking and bicycle path adjacent to the calm waters of the canal. Maybe you did not know that there were once over 6,000 miles of canals during the antebellum era in the settled eastern United States. Check out the miles of bike paths that now ply along these old transportation corridors.

I, like many of my friends my age struggle to keep my weight down. Some are more challenged due to genetics. Mainly the problem is over consumption of calories and not enough exercise. I like beer, which makes it harder. Throughout the motor age of the 20th century, in our prosperous society, we have done a great job engineering out exercise, making life easier. This has had a catastrophic effect on our overall health. I use certain tricks to combat this by parking as far away from the entrance as possible and taking the stairs. If it is not within walking distance, do you really need to have it? I admire the kids in drum corps for their physical fitness, especially this time of year when they are their fittest. All you need to do is attend an afternoon rehearsal at one of the high school housing sites to see what I mean. What a contrast to many of us in the stands. I think we can do better. The nice thing about the finals at Lucas Oil Stadium is that anything one needs is within walking distance of the many hotels next to the stadium. Today I will park the car for the duration of my 4-day stay. Today is a down day with no drum corps competition. Each corps is feverishly rehearsing, tweaking, changing, and perfecting, members in full sweat, lean from the summer of triple session workouts. In two days they will be competing in the preliminary finals of the World Class Drum Corps International (DCI) championships. Some will perform in the Semi finals on Friday and fewer still will perform in the Final competition on Saturday. Hold onto your hat!