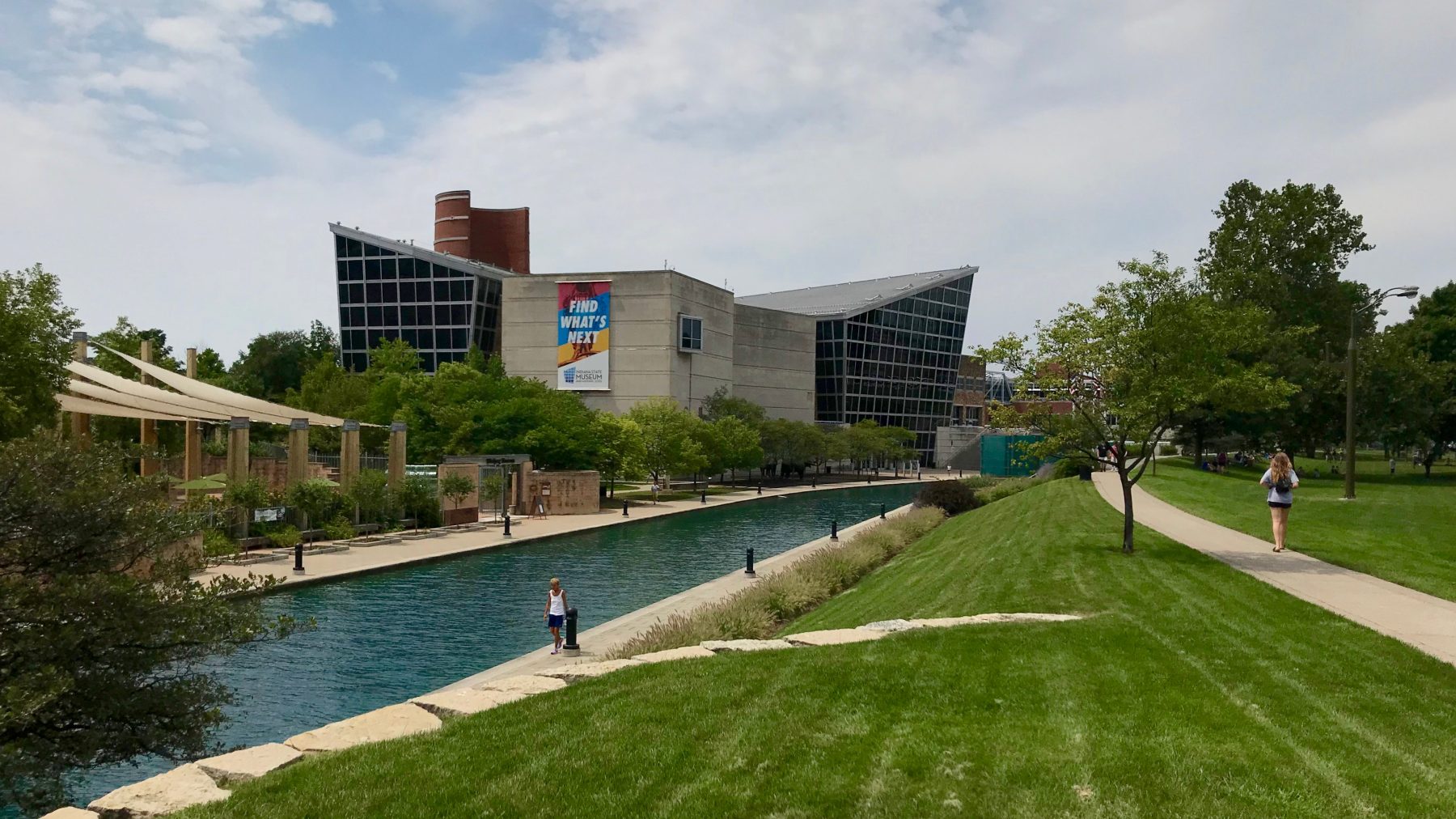 I am at the Indiana Convention Center, a block away from Lucas Oil Stadium in downtown Indianapolis. This vast indoor environment would rival most shopping malls for indoor space. There is a comfortable lounge for me to sit, plug in and write. The air-conditioned building is a very welcome escape from the mid-Summer, mid-Western heat. I am on my way back from lunch and watching the Drumline Battle competition that is held in the open plaza across the road at the Pan American Center Pavilion. This is where competing drumlines from all over square off, performing two-minute routines for one-upmanship. The audience picks the winner. And, inside the adjoining arena are the final SoundSport competitions, where ensembles of all kind, brass and percussion, perform and compete. Earlier in the day I spoke with members of Tri Valley Brass, who have been mentoring and performing with the famous Free Players, the world’s first differently-abled drum corps as described by DCI. Music unites us all. Tonight is the DCI World Championship Finals competition, where there will be an amazing demonstration of unification during the final retreat. 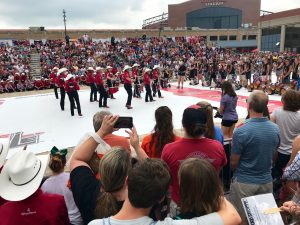 Food unites, too. My first lunch of the day was a delicious burger at The Box Burger, one of the food trucks that lined the vast outdoor pedestrian mall next to the Pavilion. It was with bacon, fried onions, and yes, white cheddar cheese. The cook was wearing a MAGA hat. Thankfully, this was the only vestige of politics that I have observed since I have been on my tour. I am so thankful that the drum corps activity is devoid of the political division facing our country. Remember, music unites. And, BTW: America already is great, we just need to fix a few things. I enjoyed the burger, not withstanding the hat. It seems to me that the combination of good food and drum corps is a natural. Options that go beyond the usual stadium fast food are welcome. Let’s hope the drum corps activity continues to evolve toward better food choices for the fans as well as healthier foods choices for all especially the members.

While in line waiting for our burgers, I met a father from Indiana, whose son is performing in a SoundSport ensemble. Coincidentally, he works for Cook Medical, founded by the late Bill Cook of drum corps legend. You may know the history and meteoric rise of Star of Indiana, a very successful drum corps founded by Bill. Adrian said that Bill’s ethics and support of music education continues today at Cook Medical. Another person waiting for food was wearing a T-shirt that said: “Marching Band, like a sport, only harder.” True.

As I was finishing my burger, my drum corps bothers Garry and Tim showed up. Rather than attend a corps’ rehearsal they chose to come downtown to check out the venue, and they were glad they did. After enjoying some of the Sound Sport ensembles perform, we headed to the nearby Gaddaugh Pub for my second lunch, an awesome fish fry that I shared with my bros. I have enjoyed my stay in Indianapolis, basking in the glow of Hoosier hospitality with an occasional locally brewed beverage. I have found many fine options for craft IPAs, even a delicious “Vermont Style”. Returning to the Drumline Battle, we were impressed at the size of the crowd. The stands were full and the perimeter was lined six deep. The state of music education is alive and well, as the band kid flash mobs swarmed the plaza with enthusiasm. This was FUN! After my turf and surf lunch, we watched the battle between the Calgary Stampede and Shadow, which Stampede won. I think I need a nap so I am headed back to the hotel next to the Lucas Oil Stadium in preparation for the big night – DCI Finals. 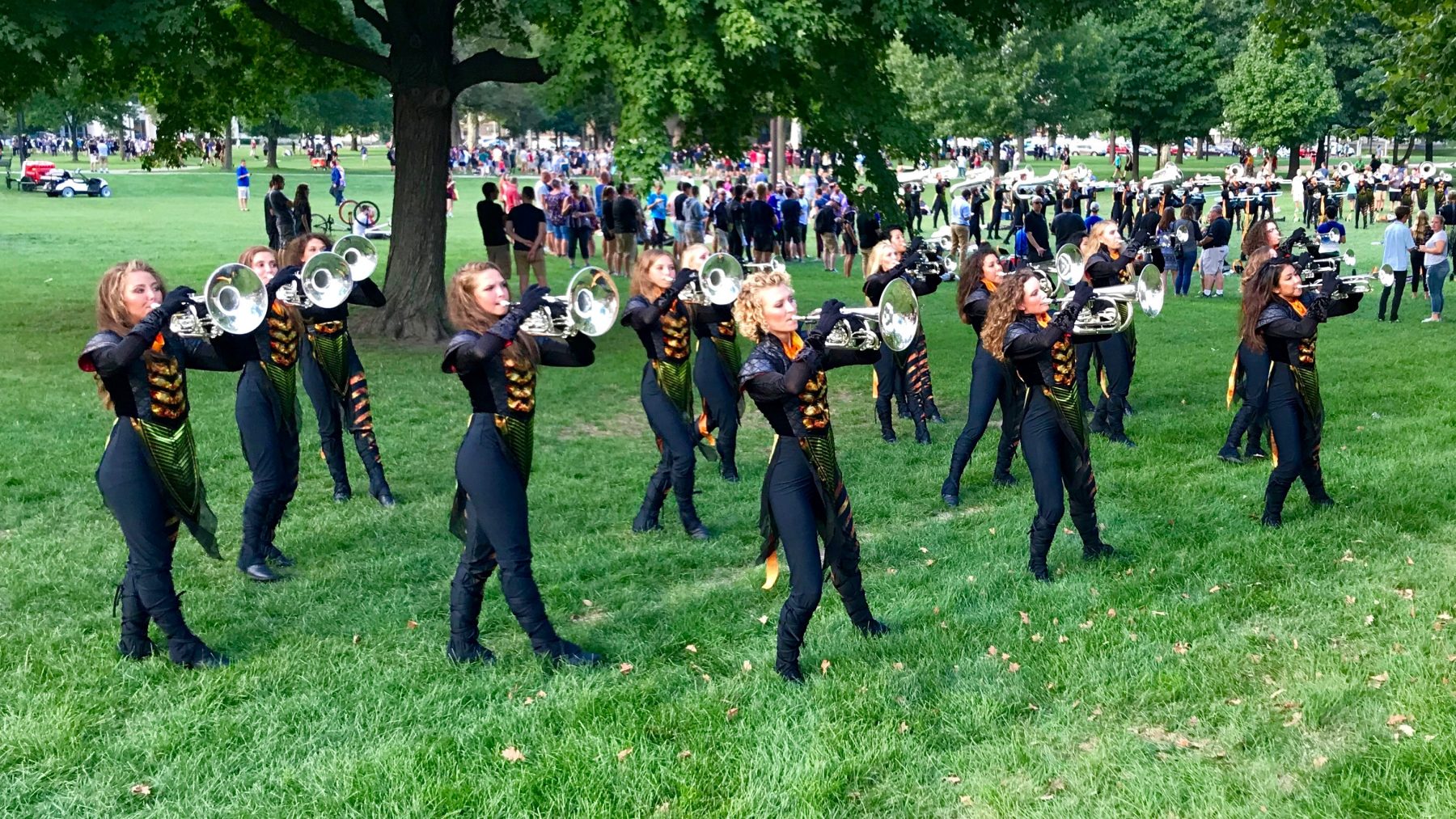 I have been having so much fun while encamped at the hotel with brethren drum corps fanatics that I did not post a blog yesterday. It has been great to connect with my newfound friends from Carolina Crown and the Boston Crusaders family of supporters. My experience at NightBEAT last month, and volunteering putting new sneakers on needy feet with them during their community support initiative – Carolina Cares, I have established good bonds with the founders of the venerable organization. As a bicycle and pedestrian advocate, community planner, and municipal project manager specializing in sidewalks, bike paths, trails and greenways, I have used the motto – “We’re making progress one step at a time.” This seems to be a fitting slogan for drum corps’ altruism beyond the marching arena. 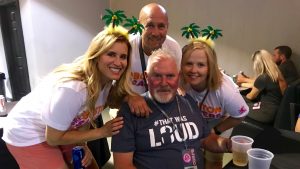 Of course it is also a blessing to be part of the enthusiastic group of supporters of the Boston Crusaders. Last summer, I ran away with this corps for an early season tour of four shows and then the run of the last four and to the finals. What a year is was as they rose six places in the standings from their previous. This summer’s BAC corps members have surpassed any previous level of achievement with the highest scores ever. The board members, volunteers and fans could not be happier with their steady rise amid the top tier corps, and they sure know how to celebrate. Surely all of the other contending corps’ base of supporters that are encamped throughout the array of local hotels are celebrating an awesome year, too. In my observation, the state of drum corps is alive and well. The future bodes well for the activity having seen so many young people loving it along side the older ones of us in the stands at the fifty this year.

Yesterday, semi finals day, was a day to feel settled in. A chance to sleep in a little, have a late breakfast and enjoy some extra curricular activities – a brisk walk to Military Park with friend Tim, being one activity. The vast public park located about four blocks away from the stadium is the location where the drum lines and horn lines warm up each day before their performances. It is a well-planned and well-attended part of the drum corps experience, with police escorting the corps buses to and from the venue. I pulled myself out of my fifty-yard line seat to witness the Carolina Crown’s popular warm up regimen including the all-female ensemble rehearsing the Beatles’ – If I Fell (in love with you). After a face-melting, up close and personal brass experience, we hustled back to the stadium, at a sustained 3-mph walking pace, covering the distance in less than 15 minutes, so as not to miss that top 6 in the semis. And, oh what a night it was at the fifty in row 12. The tympanic region of my inner ear will never be the same. 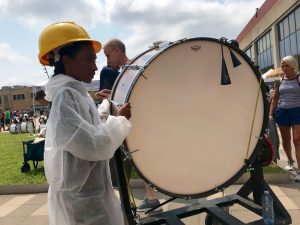 Tonight, being finals night, I will be firmly planted in row 15 for the entire twelve finalist corps performances, so no trip to Military Park tonight. If the past two days are any indication, every corps will be at the utmost preparedness and intensely focused. It has been a very good year of competition that has pushed every member forward in the activity, no matter what the standings are. Some corps rose and some slipped back, but they have all given their best and wowed with their us all summer long. Tonight will establish the final ranking of the twelve finest drum corps. In my book of rankings, they are all winners. I’ll keep you posted.