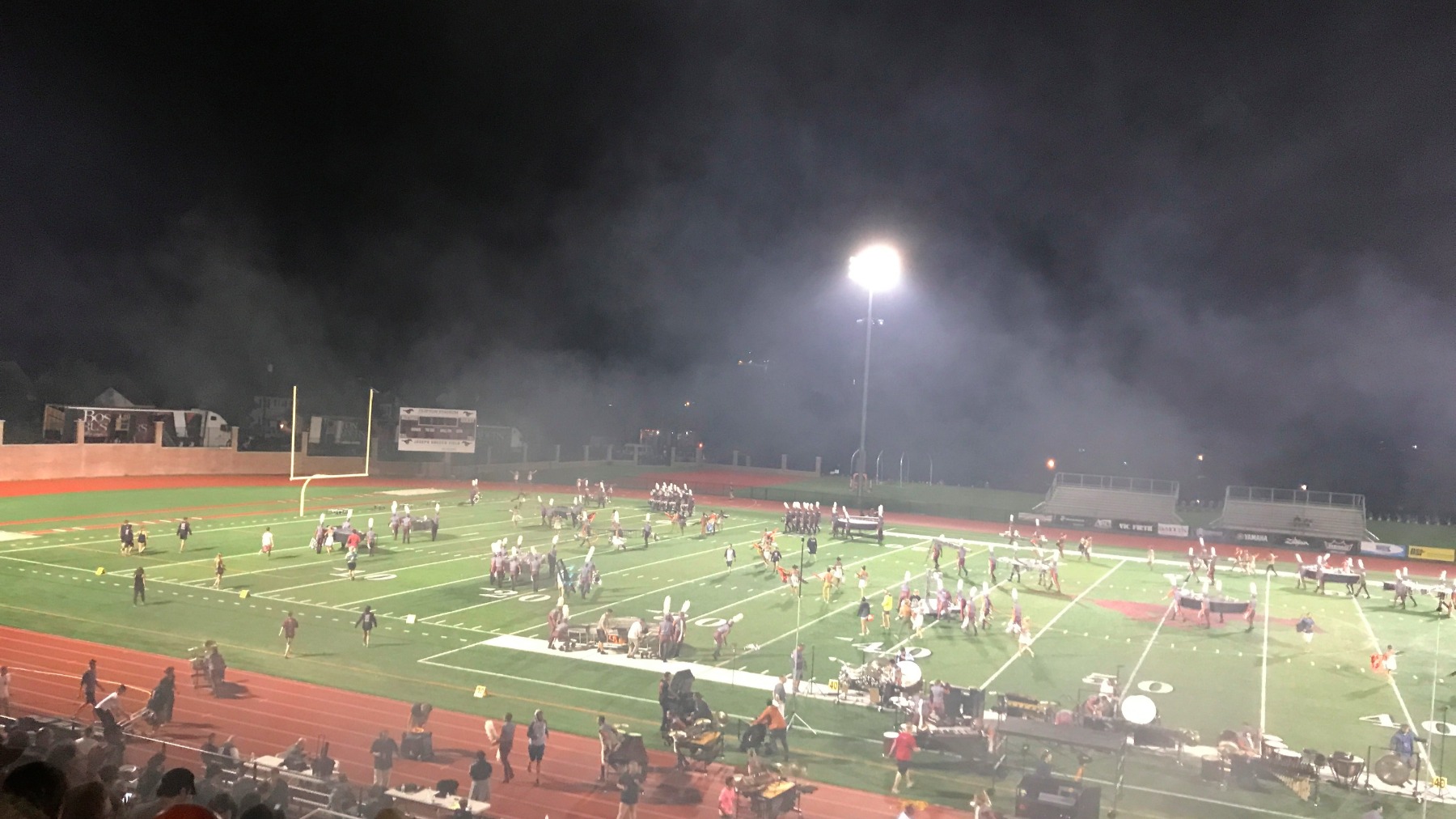 Well, I caught up with the BAC at Mount Olive High School, in New Jersey just as I left them in Muncie, Indiana – in the pouring rain. The roads are flooded and I have been sitting in my car in the parking lot for quite a while due to the heavy downpours. I am not sure what the plan is for the corps. The marker board itinerary says ensemble until 4:20, then ESL (that is eat, shower and load) with BIS (butts in seats) for the stadium in Clifton at 6:20. The corps will go on just after intermission followed by the Blue Knights, Santa Clara Vanguard and finally, the Cadets as this is one of their home shows. The Cadets have long history (83 years) and deep roots in New Jersey. One of the advantages of performing in a hometown-sponsored event is that the home corps goes on last. It is hard to tell whether there is such a thing as a hometown advantage as many of the members are from places far away, such as the four members of the Boston Crusaders from Japan. There is certainly a lot of love that comes from the local fans, parents and volunteers in the stands, in the lot and around the food trailer. It seems like Boston has a hometown crowd wherever they go due to the vast nation of members past and present. 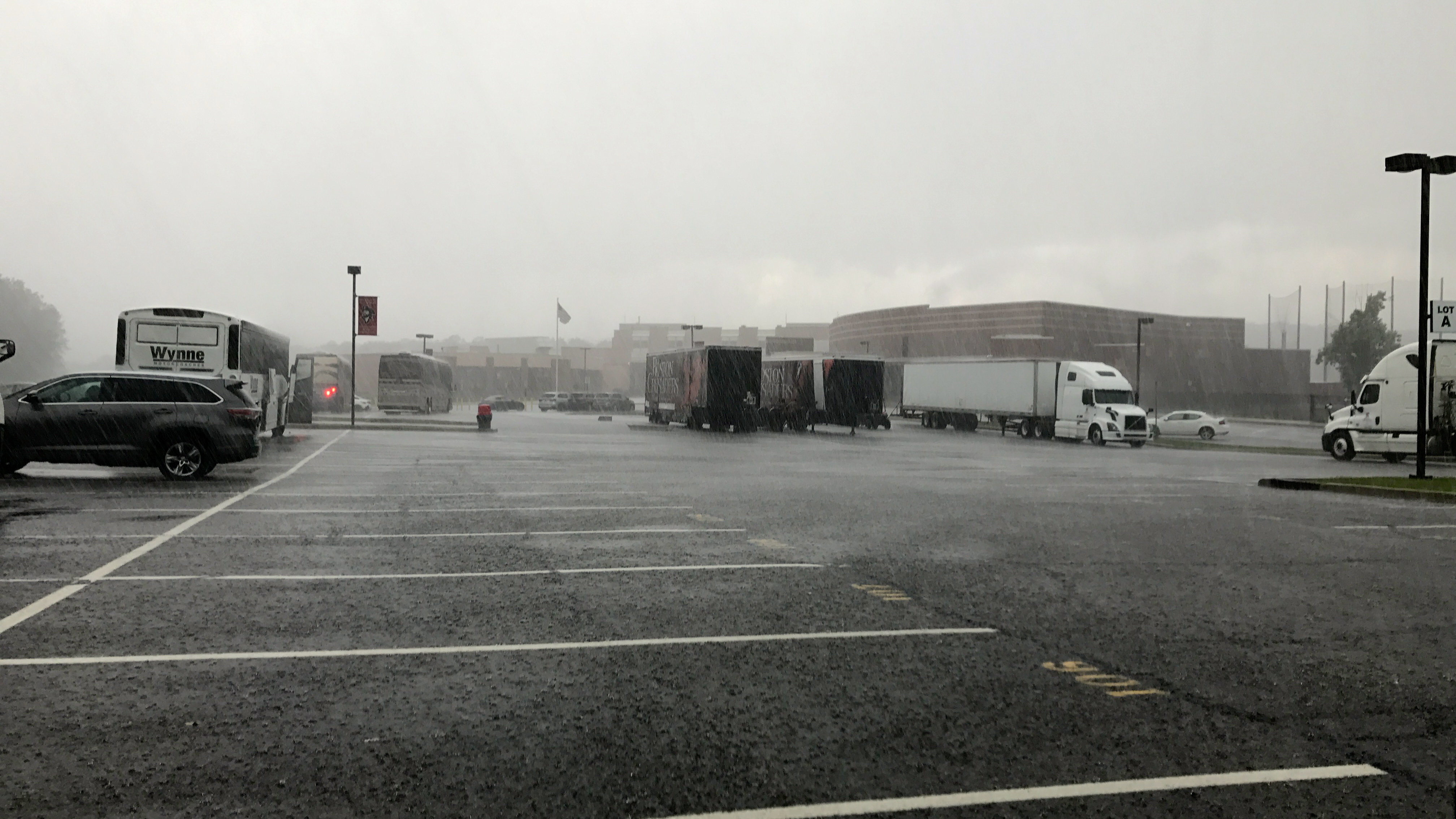 Rain is the bane of drum corps.

Here I sit, poolside at the Hampton Inn in King of Prussia, north or Philadelphia Pennsylvania. Unlike my humble Vermont home, the constant din of trucks, busses and cars replaces the tranquil sound of the Mill Brook at this similar distance from where I sit and write. This is one of life’s contrasts. The Mill Brook can be noisy at times too when the flow increases along its rocky bottom. When it is bank-full, completely submerging the rocks and about to go into the floodplain, it becomes eerily quieter with sort of a sucking sound. What I hear now is the sucking sound of a lot of historic carbon being released into the atmosphere. If this bothers me, then I am hypocritical because I will log between 4,000 and 5,000 miles just to go see drum corps shows this year.

WOW! and Crazy! are the two most favorite words that I use when I speak lately. Here is where I struggle to find better words to describe the experience of watching the Boston Crusaders, and the other fine corps that presented their well-polished programs last night in Clifton, New Jersey. The experience seeing the BAC again after a month long hiatus (which is an eternity in drum corps) was a real pleasure on many levels. It was very gladdening to meet up with so many of the BAC friends that I made and left back June in the Mid-west. How cool it was to observe the fleet of Boston Crusaders’ emblazoned trailers pull up curbside alongside the stadium within full view of the stands. Steve, the prop guy was already checking out his route to the field by the time I walked over during intermission. I cannot put into words the positive vibe that I felt with Steve, Jackie, Darren, Al, Mike and the other dedicated drivers and crew staff members that make this corps’ clock tick. I had the pleasure of being there at the gate for Giant but hustled back to my high and right, 45yd. line seat.

There are a lot of writers that do a really good job describing their impressions of this artistic endeavor. I will go back to WOW! The corps that came on before intermission were very impressive and set the stage for the firestorm of sound and sight to come. While milling around just before the show I met a woman whose granddaughter was performing with Cadets 2. This was the elderly ladies first drum corps show, so I prepared her for an evening of stimulation overload and said, just hang in there, you can take it. She smiled quizzically. I said to be sure not to miss the Boston Crusaders and she said that she had heard of their rise. Undoubtedly there is a good buzz going around for sure. Among my seat neighbors were a Cadet alum and dad. I was proudly wearing my Waldo hat and the dad said jokingly that if I was a Boston fan that I could not sit there. I congratulated the alum and said that the Cadets had made me cry more than once and that I love all of the kids. There was a collective acknowledgement form everyone around us and we all enjoyed the evening of not-so-light-duty entertainment in solidarity.

Crazy good! That is all I can say about the BAC performance. The cleanness is very obvious, the emotion is genuine and raw, the embellishments of sound and movements have really taken this program farther to define the story of Wicked Games. As the corps was taking the field, someone in the stands yelled: “Take us there Boston!” From start to finish, Wicked Games flows seamlessly through a visual and musical depiction of the Salem witch trials in early American history. The show climaxes with the execution of a Bridget Bishop by the not necessarily historically correct means of burning at the stake. Through ingenious methods employed by the prop, simulated fire and smoke envelope her as the brass reach their climax chord. This special effect was unveiled in July and explained the system of fans and lights that I observed while moving this large and heavy prop back in the June. The crowd leapt to their feet. The smoke (steam) lingered long after the ending, leaving a lasting impression of the experience. I think that everyone that sees this show live in person for the first time is hugely impressed with it and the new BAC. They are showing it while on their feet.

My second favorite program of the night was the Blue Knights – i. That’s not a typo. I would like to run away with this drum corps too, only they are from Denver Colorado and I am already pushing this mileage thing. Firmly planted in the 21st century, this corps has a very compelling musical virtuosity and a highly artistic visual style. The uniforms are representative of the direction that drum corps is going, including the lack of headwear. I will try harder to explain how this show makes me feel in a future post. The only thing that is keeping this corps out of the top tier programs is low scoring. As a fan, I have a difficult time understanding the finer points that separate these corps when it comes to the judging, so I will leave that up to others to pontificate on. But, I know what I like. Go BK! Thanks for coming east to the Boston area tonight for the East Coast Classic in Lawrence. Alas, I will not be there to see them in New England this year.

Santa Clara Vanguard, another perennially strong corps has moved further into this century as well. Their program Ouroboros is a winner. A fan nearby mentioned that this program has the best use of props. Several movable circular platforms are employed. Emblazed with the image of the iconic serpent chasing it’s tail, they rotate and traverse the field in orchestrated arrangements providing a visual display as well as ways to highlight and elevate sections of the corps and solo performances. The brass sound of Santa Clara has surely been enhanced by the multiple mic’d horns that permeate the marching brass. During the impressive musical moments, one can hear this brass swat team highlighted as the sound is pushed through the powerful audio system right in front of the audience. This is another corps that lost their hat and feathers.

Today is a very special day in Boston. The Boston Crusaders are home for a show in Lawrence, their first and only home show since the season officially began. I will not be there, but I can only image the huge outpouring of love that the BAC will receive on their homecoming. This corps has been away all summer since they left spring training in Castleton, Vermont and the Concert in the Park in downtown Boston back in mid-June. My brief intersect with them as the BAC ship passed in the night in Clifton was just enough for me to know that they are all well and good. When I asked how the corps and the staff were doing after the month long slog, Steve, the prop guy said, “The corps members are pretty much self sufficient.” Meaning that they have their routine and do not need a lot of hand holding. On and off the field, they have the program down. The support staff is definitely there as well. As I was leaving the show, I walked past their curbside encampment. The corps was having snack. I noticed that down the road, Steve and a skeleton crew of volunteers were loading the props. I know that Steve said to his member crew to go get snack. Steve is the hardest working and most loving person in drum corps. Period. This was an area of expertise for me while I volunteered in June so I pitched in to help load the trailer. It felt good.

Tonight, however, while BAC is back in Boston, I will be a VIP at the Tour of Champions (TOC) show at the Talen Energy Stadium in Chester, a suburb of Philadelphia. This is another home show for the Cadets. Did you know that Chester is the hometown of Samuel Barber? is a very cool stadium next to the Commodore Barry Bridge, which is an impressive structure that looms large over the stadium. The bridge is named after the Revolutionary War hero John Barry who resided in Philadelphia. This is my second year to this venue. It is the first time one gets to see the top corps perform together in the east following the long July slog through the hot south. Regrettably, the Blue Devils are not on the list. I assume that next year BAC will be in the TOC since they are now in solid 6th place. I will be back in Philly for that. I’m looking forward to a more complete reunion with BAC and the opportunity to meet some of the BAC family again in Allentown on Saturday. But tonight it is time to enjoy some VIP treatment and see what the other boys and girls are up to.