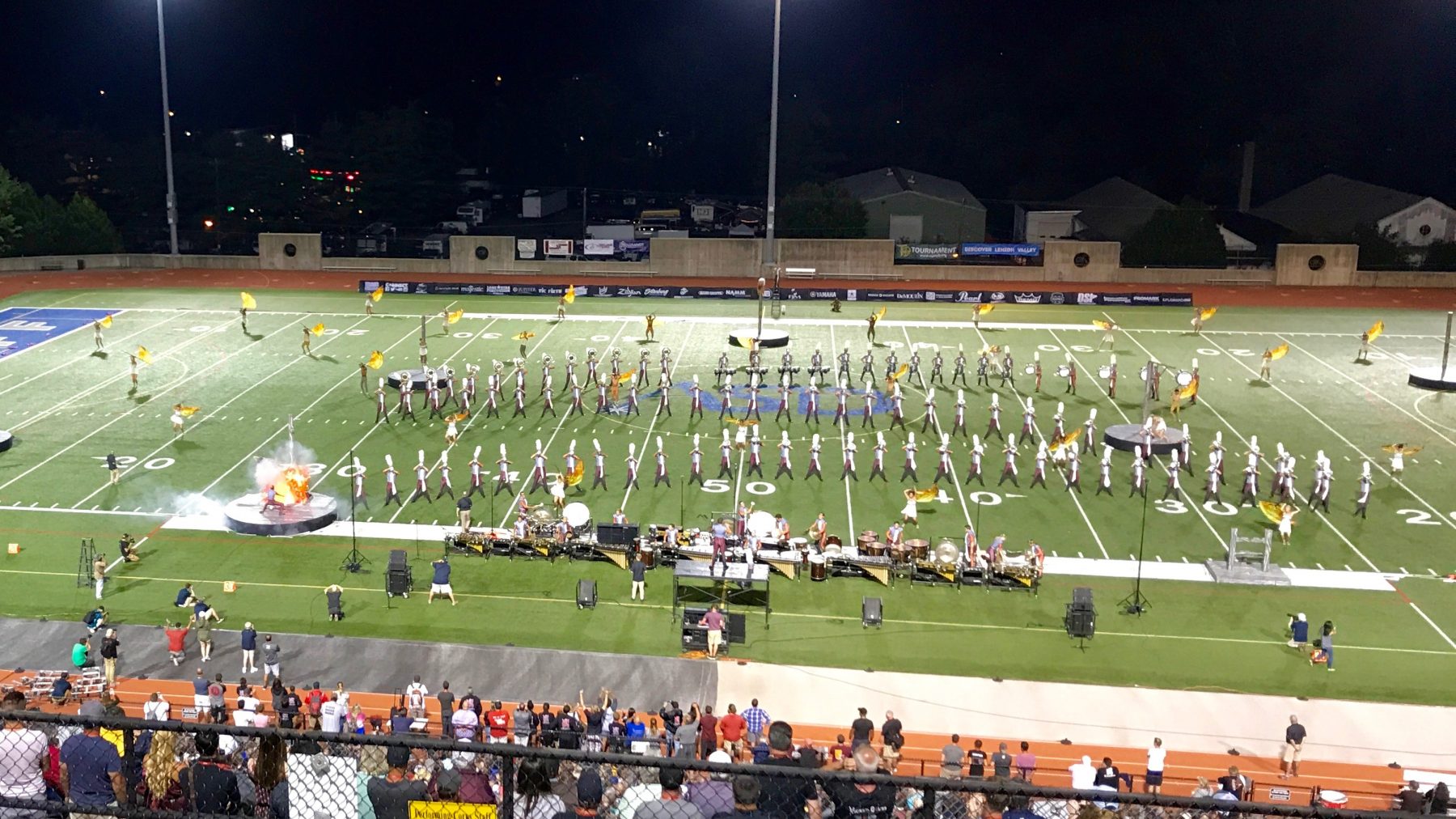 BAC brings it at the close of their program in J. Birney Crum Stadium.

Today, I am on my way to Rome, New York, as smallish venue for Drums Along the Mohawk. I will be staying in Clinton visiting my sister on the farm in her beautiful Italianate farmhouse. It is a private residence that would rival any bed and breakfast in Vermont. What a treat from the life on the road at value hotels and sleeping in the back of the Volvo, which I did last night for a few hours on the Pennsylvania Turnpike rest stop on the way from Allentown. When I arose at 4:20 am, I went in for coffee and a bladder adjustment and returned to the car to find it gone. After I waggled my head in a figure 8 pattern and re-calibrated, I returned inside and went out the Northbound side to find the car exactly where I left it in the identical mirror image parking lot. I had gone out the Southbound door by mistake.

What can I say about day two in Allentown? I am running really thin on new words to articulate what I am experiencing. The lineup was impressive and the quality of sight and sound graduated up steadily throughout the night. It was hard not to enjoy the Academy performance – By a Hare. It is creative, fun and well done. The musical rep was identifiable and the arrangements squeezed the best out of the brass and percussion as the guard played out the pantomime of hunting those silly wabbits. Some shows have fun moments but the antics of this show run from start to finish. The Cadet’s performance of Leonard Bernstein’s Mass continues to evolve and grow into its own. The closer builds to an intensity of spirit that I felt completely overwhelmed by. Let us pray! That to me was a hard act to follow.

BAC took the field directly after the Cadets. I have anticipated seeing BAC in Allentown for several weeks since I became involved with this entourage back in June. Since I had tickets, I did not jump back into my volunteer role just yet, so I was in my 50-yard line vantage point again. It was very exciting to see the corps perform in my favorite drum corps venue – J. Birney Crum Stadium. The stands are high and early, meaning one can be up high to really appreciate the drill formations, but still not too far away from the action and sound. Others in the stands were equally expectant, and they too were not disappointed. As the faux smoke cleared and my eye dried, I settled back into my seat to enjoy the rest of the awesome corps. I would do a disservice trying to critique Santa Clara Vanguard and Carolina Crown that followed, since I have been so affected by BAC. It was here during my first drum corps experience in J. Birney Crum stadium in 2012 where I saw the Santa Clara Vanguard for the first time since my brother and I saw them in Rochester in the 70s. That was a starry night in the past. My favorite corps and program in 2012, the year that I became reintroduced to the activity, was Carolina Crown – For the Common Good. During that first year in Allentown, I was scoping out the stadium and surrounding streets on an early afternoon walk. Suddenly, I heard horns in the distance playing the familiar Copland piece. I followed the sound to the Crown’s afternoon rehearsal at a school nearby to experience a complete run-through up close and personal. I am now a rehearsal junky and seek out the housing schools in advance to watch them.

Suffice it to say, all of the corps enjoyed the love and appreciation of the full house crowds in Allentown.

I am sitting alongside one of the many vast parking lots at Rome Free Academy in Central New York State. Steve, the brass instructor is taking the high brass through a regimen of chord changes and renditions on tonguing. [digga-dot, digga-dot, digeta, digeta, digeta-dot] The tone of instruction is more demanding and less patient with any lack of focus and attention from the members. However, it is heavily salted with praise and encouragement. This is the pursuit of excellence where one tenth of one percent can make the difference in placement at the final championship competition this coming Saturday in Indianapolis.

The sprawling campus for the Rome Free Academy was constructed on land of the former Griffis Air Force Base. No longer are there nuclear-armed B-52 Bomber planes on site as the airbase has been converted to a business and technology park. I was born an Air Force brat on this base in 1954 and grew up nearby. My father worked on radar technology at the airbase. When I was young in the 60’s at the height of the cold war, he brought me and my brother here to observe a Strategic Air Command alert. They were rehearsing getting dozens of huge B-52 bombers into the air in rapid fashion. The thunder of those awesome flying behemoths taking off in formation was a very thrilling experience. Though, not quite as thrilling but close, I would much rather be watching the formations being rehearsed in front of me by this amazing ensemble. I also prefer seeing these kids in the colorful marching uniforms rather than the khaki or olive drab of military uniforms. I am not unhappy to see the military roots fade as the creativity of the activity continues to bloom. This is no disrespect to veterans. I honor them for their service by suggesting that maybe we can avoid putting these kids in harms way unnecessarily.

I want to give a shout out to the nearby VVS High School, class of 72, my alma mater. They celebrated their 45th class reunion last night while I was in Allentown. It was a very difficult decision for me to miss that. Coincidentally, tonight’s show will be on the old RFA school stadium field in downtown Rome where I once played football. Maybe some of my classmates will be in the stands again tonight. Drums Along the Mohawk has been on the DCI tour for many years and the fans in Rome love drum corps as much as any place I have been. The Troopers from Casper Wyoming are a perennial favorite of the Rome crowd. I’m sure they are also excited to have Boston return again this year. I gave my ticket to my nephew, who will join my sisters in the stands. I will be helping with the pit trailer and the prop crew and will watch Wicked Games from the field again. Tonight I am back on staff again – Yay!

After the show tonight in Rome, I will be heading to Massillon Ohio again for the final Tour of Champions competition of the regular season. I purchased my ticket for this show back in October. Ron has invited me to join the Corps to complete the tour through the championships. I am pretty sure now that I will be going the distance, heeding the words of Garry the BAC board member back in Allentown, “The story does not end here. It ends in Indianapolis.”

Next Post – Drums Along the Mohawk and Massillon II