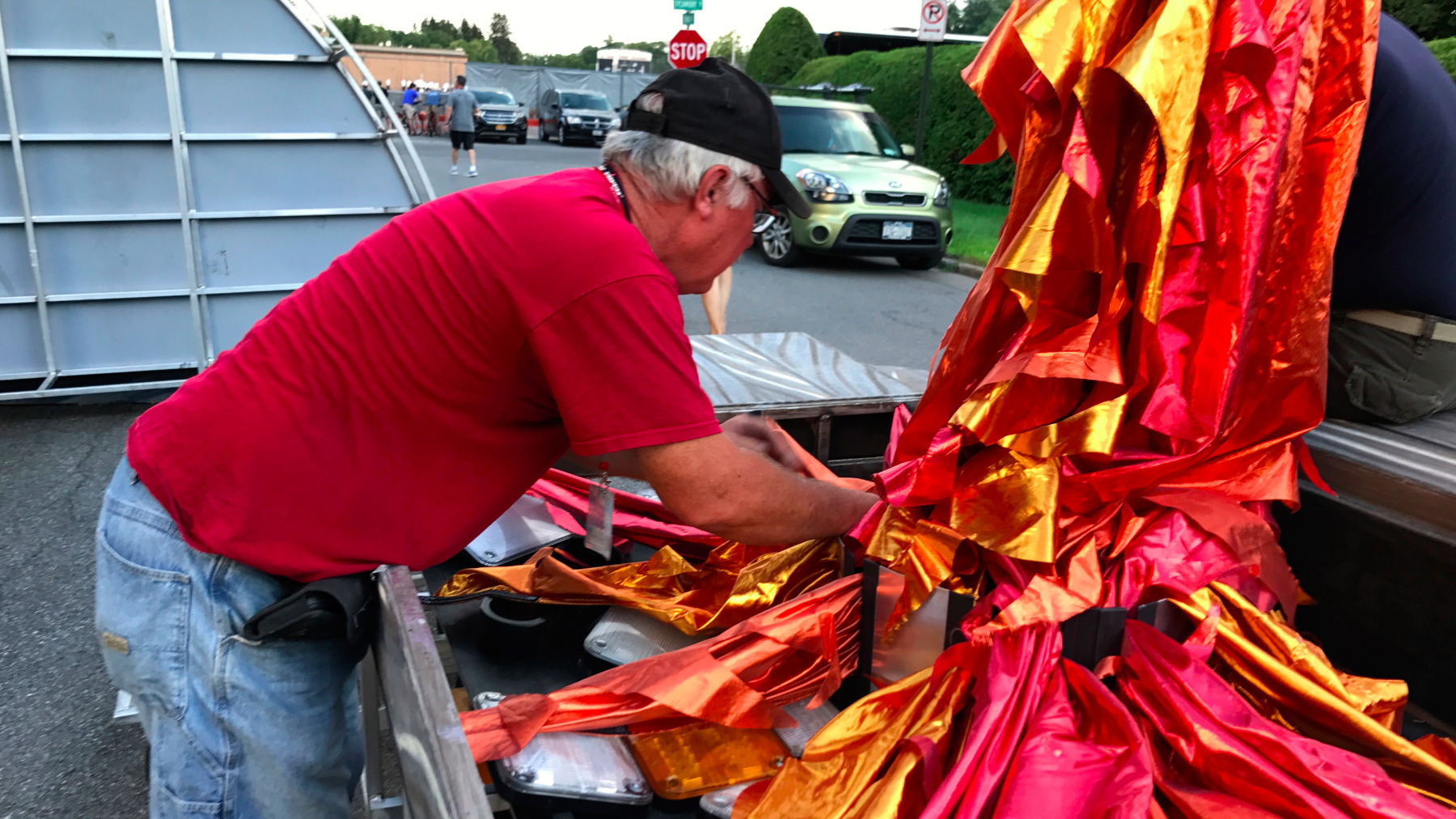 Steve the prop guy loads the flames into the prop for a dramatic incineration ending in Rome.

I have been driving all morning through western New York and Pennsylvanian to Ohio. Last night at Drums Along the Mohawk in Rome was my first day back on the volunteer job – prop crew with the Boston Crusaders. I gave my ticket that I had purchased months ago to my nephew who joined my two sisters and a brother-in-law in the prime seats. I did not get a chance to meet up with them as I was occupied most of the evening with the flip flop of moving the props on the truck, off the truck, and so on. This gave me a chance to take a closer look at the inner workings of the main prop that creates the fire and smoke at the finale. It is affectionately called Big Bertha by Steve the prop guy in deference to its weight. Steve carefully repacked the simulated flames and then test-fired the special atomizer that generates the faux smoke. We were in the middle of a residential street next to the stadium where the corps was parked. I have wondered what it must be like to live next to a stadium when every summer the area turns into sort of a musical war zone.

Rome has hosted a DCI show since the days when there were dozens of upstate New York corps such as the long-gone local corps that I and my brother marched in, the Grey Ghosts. There is no doubt that the Roman’s favorite corps of the evening was the Troopers from Casper Wyoming. This more traditional corps has come to Rome for many years. They passed in review to their standing, home-away-from-hometown crowd.

My sisters had some interesting impressions of the BAC show. I may have over-hyped the show. One reflection was a lamentation about the portrayal of violence upon women. I had many miles to think about that today. I kept coming back to the evidence of gender neutrality that I have observed in BAC among the members. There is close to a 50-50 split between the sexes. I have never observed anything that would indicate a bias one way or other. Each and everyone works equally hard and are equally dedicated boys, girls, women and men. The kids are really getting into their roles portraying a depiction of historic witch hunts, reminding us of the fatal consequences of unchecked hysteria.

It was a long day on the road but I am finally here again in Massillon Ohio, the venue where began volunteering with the Boston Crusaders back in June. This is the site of the first and last competition of the regular season for the corps. It seems like ages ago when we were here to premier the program Wicked Games to an appreciative audience. Tonight is also the last Tour of Champions show with a full line up of the top corps. Since BAC is on first, we were the first corps to arrive and we had a prime unloading spot next to the field entrance. The unloading went smoothly as we had plenty of time. We could stage the props in the end zone, another advantage to being first.

I am sitting on my tailgate in the parking lot above the stadium. I have just finished helping load the trucks following the BAC performance. I decided not to go back inside staduim, but rather to sit here in the lot for a while and write this entry. I just enjoyed hearing the Cadets stirring program – The Faithful, The Fallen, The Forgiven – again from this elevated, extra-stadium location. The sound up here in the lot is particularly good. Love that closer! Amen.

OMG! The boys and girls of the BAC really nailed Wicked Games again tonight in Massillon. Since the pit had plenty of help taking the field, I ascended up to my seat #35 in row PP in section 3. The stairway aisle next to my seat at the summit of the stadium provides room for some of the corps staff who quickly ascend to watch the show. Next to me stood Gino, one of the top geniuses in the business and head of the BAC brass. Behind his quiet humble manner, I could see the pride he felt for the kids who pulled off their magic right in front of us. These kids are awesome and the adults, who work just as hard to extract their excellence, are truly exceptional. They have been able to tease out every guard member’s, percussionist’s and horn player’s potential to deliver precision movements and clarity of sound at high speed and high volume – dot to dot, note to note.

I wish I had captured a recording of tonight’s performance of BAC. What a treat to witness this show in the most prime location on my drum corps tour – the Paul Brown Tiger Stadium. Yes, better than Allentown. The upper deck has an overhang that captures the sound waves and pushes them into the space. Face melts are common there. Sitting in the epicenter of sound, I ate it up with a few moments of cupped hands to my ears.  I had constant body sparks during the intense moments. Once again, the ballad brought moisture to the oculars, and the closer brought me to my feet. The climax of the horn line ascends and drops a half step before the final extended powerful note, further peaking the senses when the witches are consumed by fire. The hair on the back of my neck was on fire.

I’m going back inside the stadium to enjoy the balance of the corps, Carolina Crown, Santa Clara Vanguard, and the Bluecoats. After the show, I will head toward Indy. BAC is already on the road.

I am back in the lot waiting for the crowd to clear before I hit the road. Meanwhile, let me just say that tonight was pure 21st century drum corps. The intensity and the precision of the remaining corps, fully displayed the possibilities of future drum corps experiences. The electronic landscape was vast. The drills were fast. The late-season confidence of the performers was evident in the swagger and panache of the drills, especially during the awesome jazz riffs. Arguably the best encore of DCI, the Bluecoats serenaded us with Autumn Leaves and blew our faces off with The Boxer.

An armada of yellow busses passes me on the way out of the lot carrying future drum corps members – the band kids from all over northeast Ohio who came to watch the show. The championship corps members on the field tonight are impressive aspirational models for them. I think each band kid who was in the stands tonight will step up and reach just a little bit higher tomorrow. It’s funny the dichotomy that I have observed in the stands. In the middle are the older drum corps fans, and out beyond the 40 are the armies of band kids. I believe that the inclusive attitude of today’s high school marching bands and drum corps is a harbinger of a hopeful future for a more harmonious American society. Music unites.