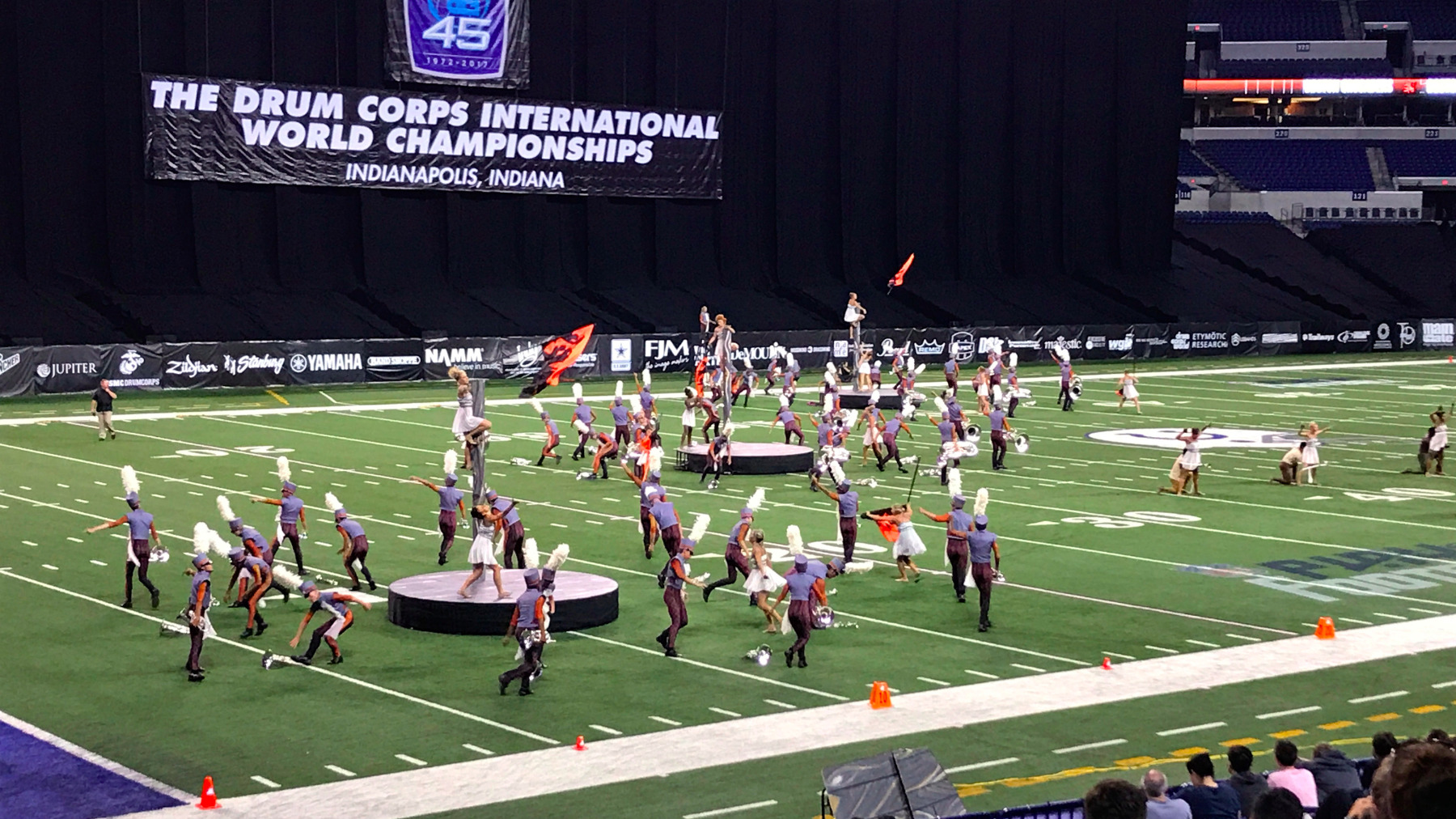 It is a show day and our third day on the campus of Grand Park. The brass sections are going through their warm up with wa, wa, wa, wa, waaa increasing and then decreasing in half steps in succession. They are accompanied by the hum of the mowers cutting the adjoining natural turf fields. Ensemble rehearsal is outdoors today on the main football field at 1:45. Mary-Mason the Tour Manager handed me a security wrist bracelet for entry into the Lucas Oil Stadium. I am officially going in with the corps. I do not have a seat in the stands, so this will give me the inside and behind the scenes perspective that I will relate to you in my posts later.

After two days and nights living out of Volvo, I finally got a break. The Red Roof Inn was full, so I slept in the Volvo the first night. I used Al’s shower while he took my car to Walmart rather than the tractor. It was a good trade off, sharing resources. As luck and providence would have it, I also slept in a bed last night. While at dinner I met an off duty cardiac nurse, Lynn, who was enjoying a well earned cocktail. She had never heard of drum corps before so of course I began my well-rehearsed pitch. Before too long, she had me convinced to use her washer and sleep in her guest room, an offer I could not refuse. When we walked into her nice home, I turned and saw her grand piano in the living room. Eureka! I found its voice after a minute of rambling and then had a nice set much to her listening pleasure. She read my blog posts this morning and just texted me to say that if there is a choice between sleeping in my car again tonight or her guest room again, that the door is open and she has another bedroom and a couch if there are others who need a place to crash for the weekend. Hoosier Hospitality.

I have met many amazing and giving people that have helped me on this journey, beginning with my friend Ken, the IT guy who saves turtles in his spare time, who got my blog up and running. I don’t know why, but it seems that the most meaningful activities that am involved with are dependent on volunteerism. Drum corps is far from the exception. I am absolutely astounded by the amount of volunteer men and women who support the BAC including Garry and the other board members, and the throngs of volunteers, donors and supporters. This volunteerism extends into the more responsible roles such as Steve the prop guy and Vivian the doctor. I am certain that among the kids out on the field there are many that will pursue such philanthropic and altruistic endeavor. This is the great feeling of hope for the future that this experience has imbued in me. 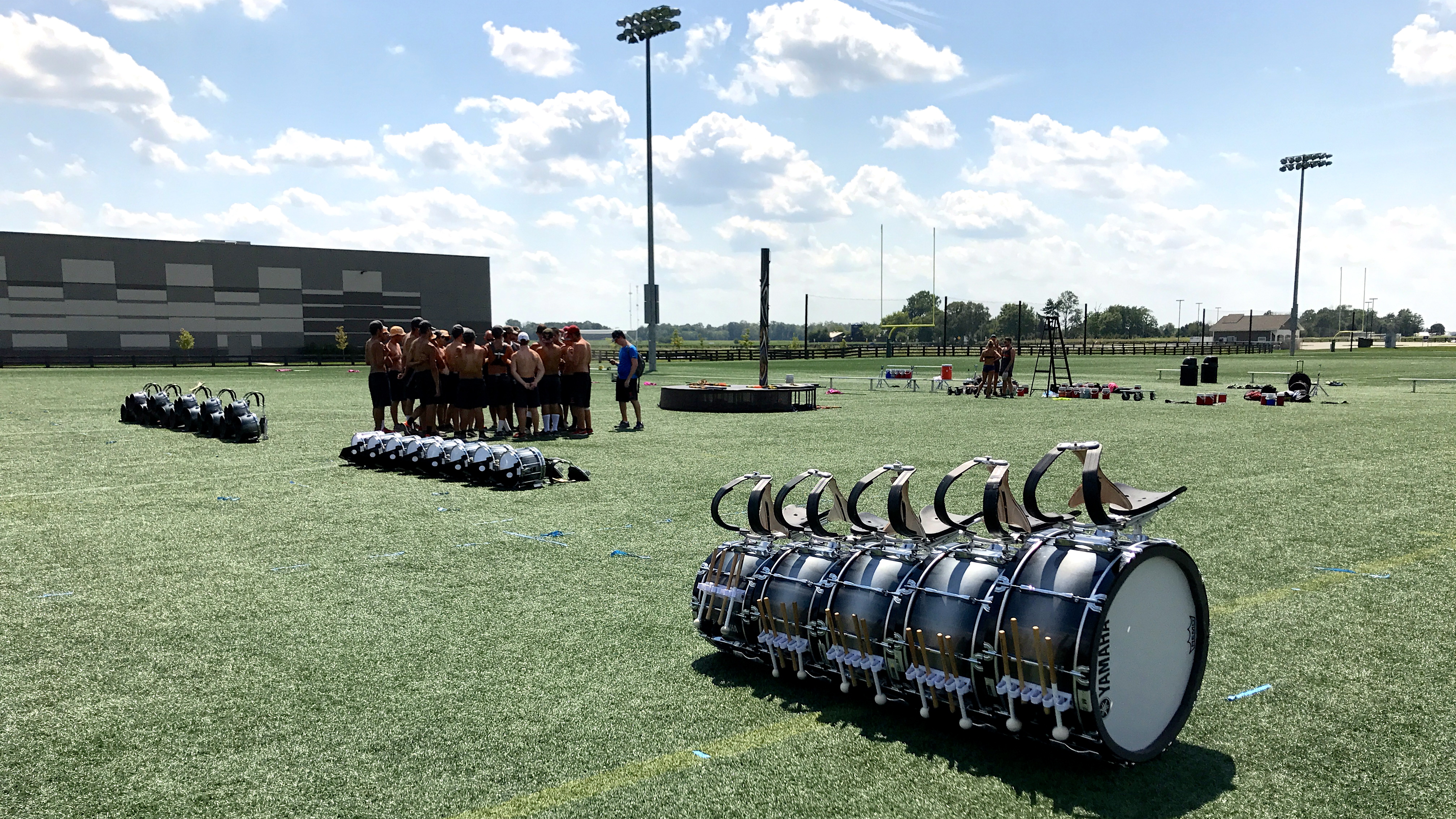 The percussion battery enjoying a moment of solidarity during outdoor rehearsal at Grand Park.

I am sitting in Lucas Oil Stadium. I have seen it many times, endlessly watching videos of past championships. This is my first time here in person. The props have been unloaded and moved down the steep tunnel into the cavern that leads into the stadium. A steady stream of corps members marching in formation descend into the tunnel, accompanied by the props and instruments on carts and trollies that rattle and shimmy down into the basement of the gargantuan building housing the DCI finals. I have walked what seems like a hundred miles on hard surfaces at Grand Park and now this stadium, and my feet are killing me. It is time to sit and write, so I am in the cheep seats inside the stadium. Can you say echo? Some day I will find out how it sounds at the 50. The stadium is huge, plenty of room for the festival marketplace in the plaza surrounding the stadium. In the marketplace you will find the displays from all of the corps selling t-shirts, hats, and you name it – the Souvees. The BAC souvees are having a great year with the emergence of a competitive corps and increased popularity. In addition to the souvees, there are booths from all of the manufactures of instruments, uniforms, props, and other associated drum corps related products and services. This is a marching arts extravaganza. 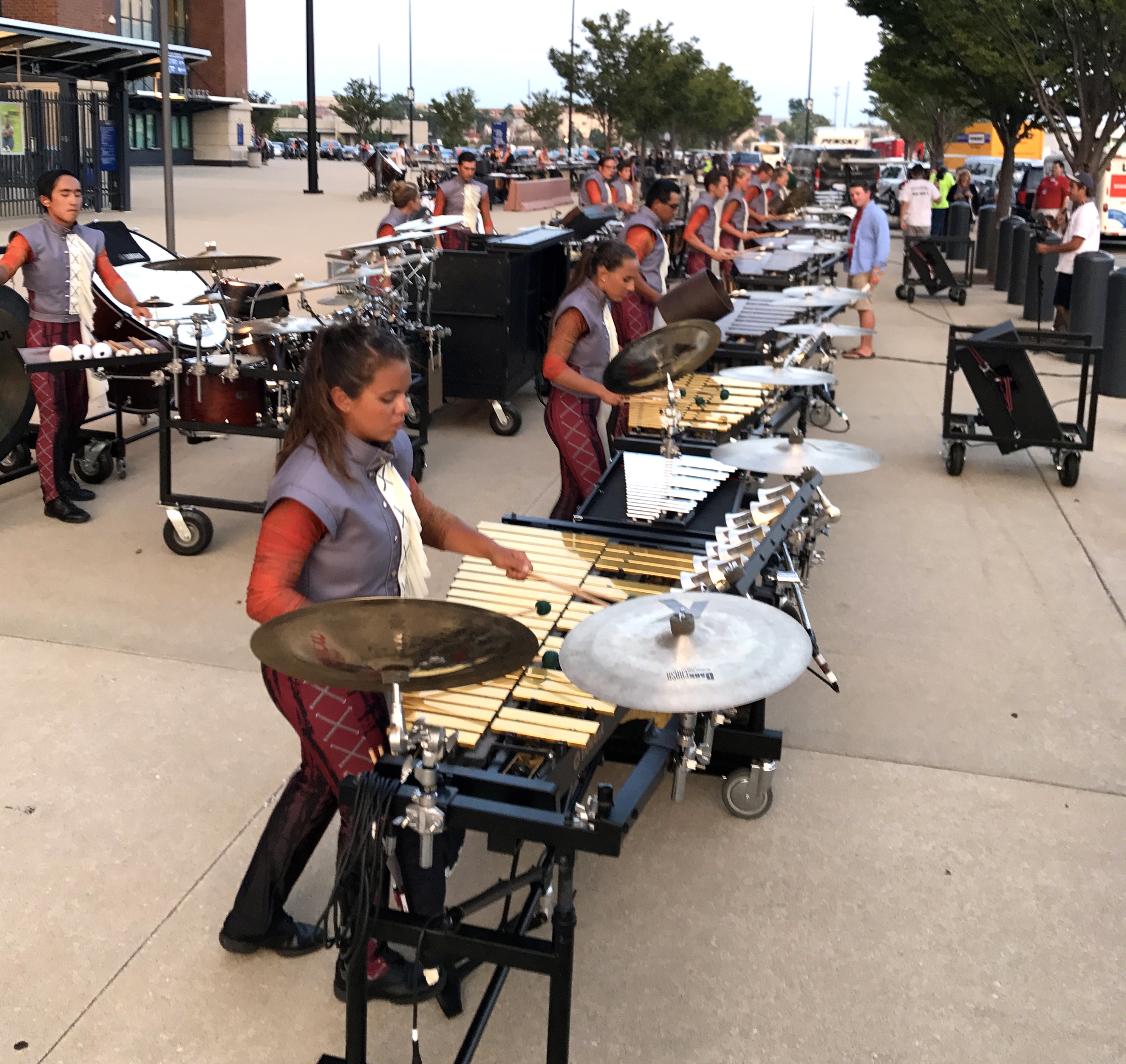 The pit warms up outside Lucas Oil Stadium in preparation for the preliminary final competition..

The Blue Knights are on the field now. I have really enjoyed their show – i. The program’s ethereal theme represents the individual through the eyes of today’s more socially connected society. Or something like that. The forward-trending production is compelling visually and musically. There are large black curtains covering the stands on the opposite side that provides a consistent unobtrusive backdrop for the corps’ colorful regalia. BK’s multi colored uniforms sparkle as they maximize this effect. The only major visual distraction is the large football helmet emblem painted in the middle of the field that many corps cover up with a graphically complementing tarp. Now the Cadets are performing, as the Boston Crusaders are in the tunnel ready to move onto the field next. I am still moved by the stirring closer. Amen.

Since my work is done moving the props into the stadium and there were plenty of hands to move the ensemble and props onto the field, I decided to watch the BAC show from the stands. Everyone hustles to get things set up without incurring a penalty. The faster set up time required at finals was rehearsed yesterday inside at Grand Park. The corps is on the field. Let’s hope the wizardry of Steve works hardwiring the trigger for the smoke machines. He has had some premature firings with the wireless remote. Tonight is shakedown for the new special effects added to the rear props – more smoke. This show looks great from the end zone, too. I am on the left side and the props on the left rear line up nicely. Steve is under the main prop with only his feet sticking out. Something is wrong. The program has started. Get out of there Steve…… Whew! Shakedown day.

I am now in the lot again. Several members are milling around the area where the corps exit the stadium ascending the long ramp. Many hugs and glad tidings are shared among the marching members from the various corps. They are enjoying this moment of convergence after a long summer of hard work and competitions across the country. Our props are distributed around the lot in no particular order. We are going nowhere for a while. This is hard work and long hours for the staff. There is a constant rumble of trucks and busses idling. Fitting for the parking lot of Lucas Oil Stadium. Ugh. Oh, how I miss the smell of the Mill Brook and the soft Vermont soil. I think we are going to have snack before we load. This is going to be a late night. I’m going to look for Garry and the others to celebrate the sixth place finish. This was the second highest finish for BAC in a championship event. Can they improve upon that in the coming semifinals tomorrow?