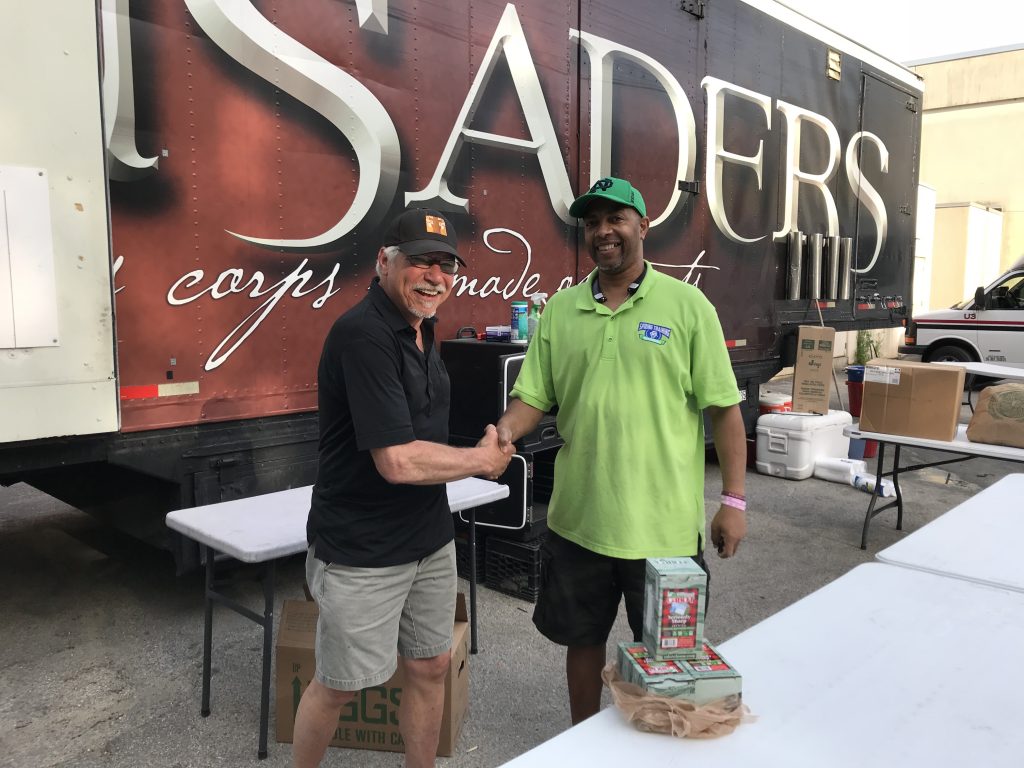 It was a splendid night for drum corps. The ever-present sun was getting low on the horizon and the temperature had descended to a moderate 70 degrees. It was a windy day, but that had abated to a nice cooling breeze. The splendor of the Green Mountains surrounded Spartan Stadium. The corps was spread across the field in clusters of the various sections – brass, percussion, and color guard. Bright green stick trees were placed uniformly around the left-rear of the field. A large compass shape platform was right-front. An array of percussion instruments lined up in a row in the middle of the front sideline – the Pit. Ron, the assistant corps director stepped up to one of the five microphones lined up adjacent to the pit to give his presentation. It is Community Night at Castleton University in Vermont, the final rehearsal of spring training for the Boston Crusaders Drum and Bugle Corps. The regular post-dinner rehearsal of the entire ensemble had been transformed into a well-planned presentation of the activity for the neighboring Vermonters.

Vermont has been the spring training home for the corps for several years. I was here last year to enjoy the presentation. I became so moved by the experience, I decided to run away with the drum corps. Perhaps you read my daily posts on this blog about my experience as a volunteer – I Ran Away with the Drum Corps. Tonight’s presentation by Ron and the performance of the corps was no less inspiring. In truth there were two major differences from last year – the stadium was jammed full of Vermonters and fans from afar, and the Boston Crusaders demonstrated a new level of early season mastery of their program. People began to arrive an hour before the show and continued to stream in as the corps members went through their warm ups at the back of the field. As a Vermonter, this is the closest DCI World Class drum corps comes to our humble communities. It was heartening to see such support of the local folks.

I arrived earlier is the day to drop off 30 pounds of Cabot Seriously Sharp cheddar cheese to Anthony, the chef. This was my contribution to the members for their hard work at spring training. Last year as a volunteer I became determined that the members, which I will also refer to as kids because I am old, should have a good cheese in their meals. In Vermont, our cheddar cheese is white and sharp – Super Sharp. Cabot Creamery is located in my town – Waitsfield. It is a cooperative owned local farmers, including many in the surrounding countryside of Castleton.

I arrived just in time for dinner and sat down with Steve, the prop guy. You know him, if you read my previous blogs, for his dedication and mastery of the mechanics of the structures and creation of the hand-held features that support the program theme. Sitting with Steve was Todd, from Middlebury, a 30-minute drive north. Todd is an ardent drum corps fan who signed up to volunteer with his companion to help in kitchen. Little did they know that they would be sucked into the prop world because of his connection with local suppliers and access to power tools. Steve has assembled a good prop crew who will be traveling with the corps this year. I am off the hook. It was also good to see some more of the friends that I made last year. Mary Mason, the membership coordinator and Al, the transportation coordinator, and Mike the driver had arrived. Hugs and handshakes were well met.

Ron’s presentation included acknowledgement of the many talented individuals that create the program and instruct the members. I have had the privilege of meeting many of them and each time I converse with them in a meaningful way, I become a little bit more clued-into their thinking. A little. Next, Ron described the theme behind the 2018 program entitled S.O.S. Each year, it is a great mystery what to expect from the top corps as far as the program theme and repertoire. Secrecy is paramount. I have had to be very discreet with the things that have been divulged to me by those in the know. I let out a couple of clues in my previous blog about spears and the conch shell. Being part of the slow release of news on the Drum Corps Planet forums.

In Ron’s words, “S.O.S is a musical and visual illustration of classical literary conflict in three acts – human vs. environment, human vs. human, and human vs. self. This dramatic device is illuminated, developed and displayed with distress, survival and salvation. Set on a deserted island, S.O.S. promises to deliver an emotionally charged portrait of the human condition.”

Emotional charges have been going off inside me quite a lot lately. I had the privilege of watching, in awe, a run-through of the program last weekend along with my board member friend, Garry. Tonight, I cried throughout. My Vermonter friends in the stands stood and clapped for minutes following the closer. It was interesting to overhear the comments as we took egress of the stadium together. “Amazing! Incredible! I’m still in shock!”

Tomorrow, the corps will begin to pack up and decamp from their springtime home of Castleton University. The local community will once again fall back into the quiet serenity that usually pervades the sleepy countryside. The noise and passion of the Boston Crusaders Drum and Bugle Corps will be transported in total, caravanning across America in the trucks, trailers and buses to a deserted island near you. Don’t miss it!

On the way home I took the road less-traveled and stopped at the Hubbardton Battlegrounds. This is the location of the only battle of th 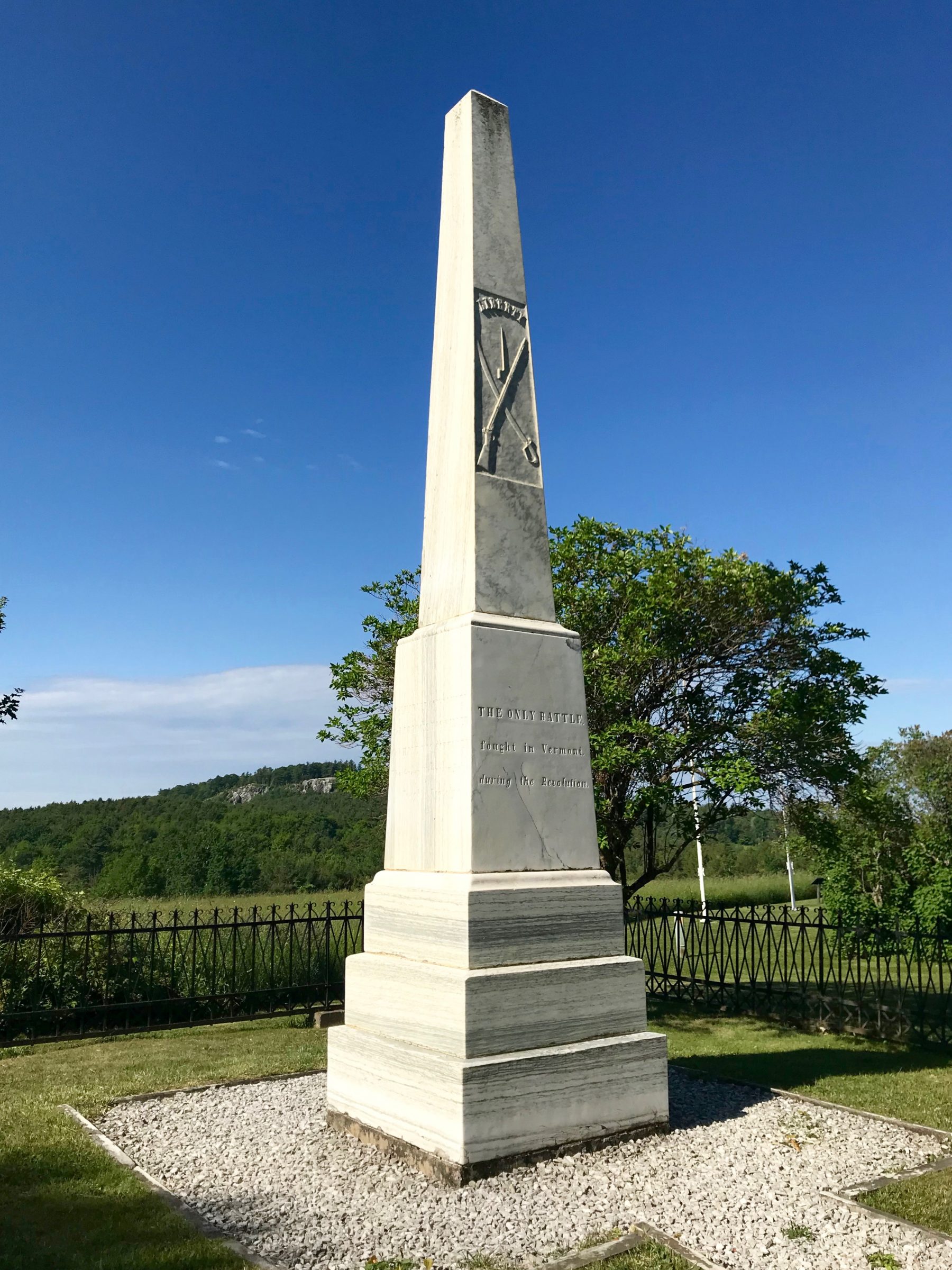 e Revolutionary War fought on Vermont soil. It was a skirmish between British forces (German Hessians) and the rear guard of the Continental Army on retreat from Fort Ticonderoga in 1777. The Americans dug in and held off the pursuing forces long enough for the bulk of the rabble in arms to escape south to Castleton. Historical markers around the open fields mark a different time when the thunder of war drums rolled across the pastoral hills. 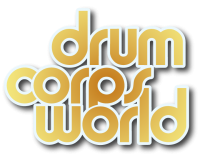 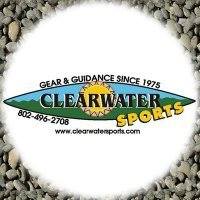 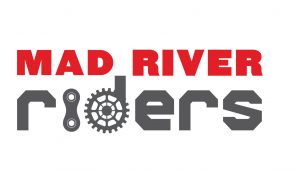 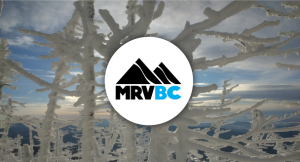