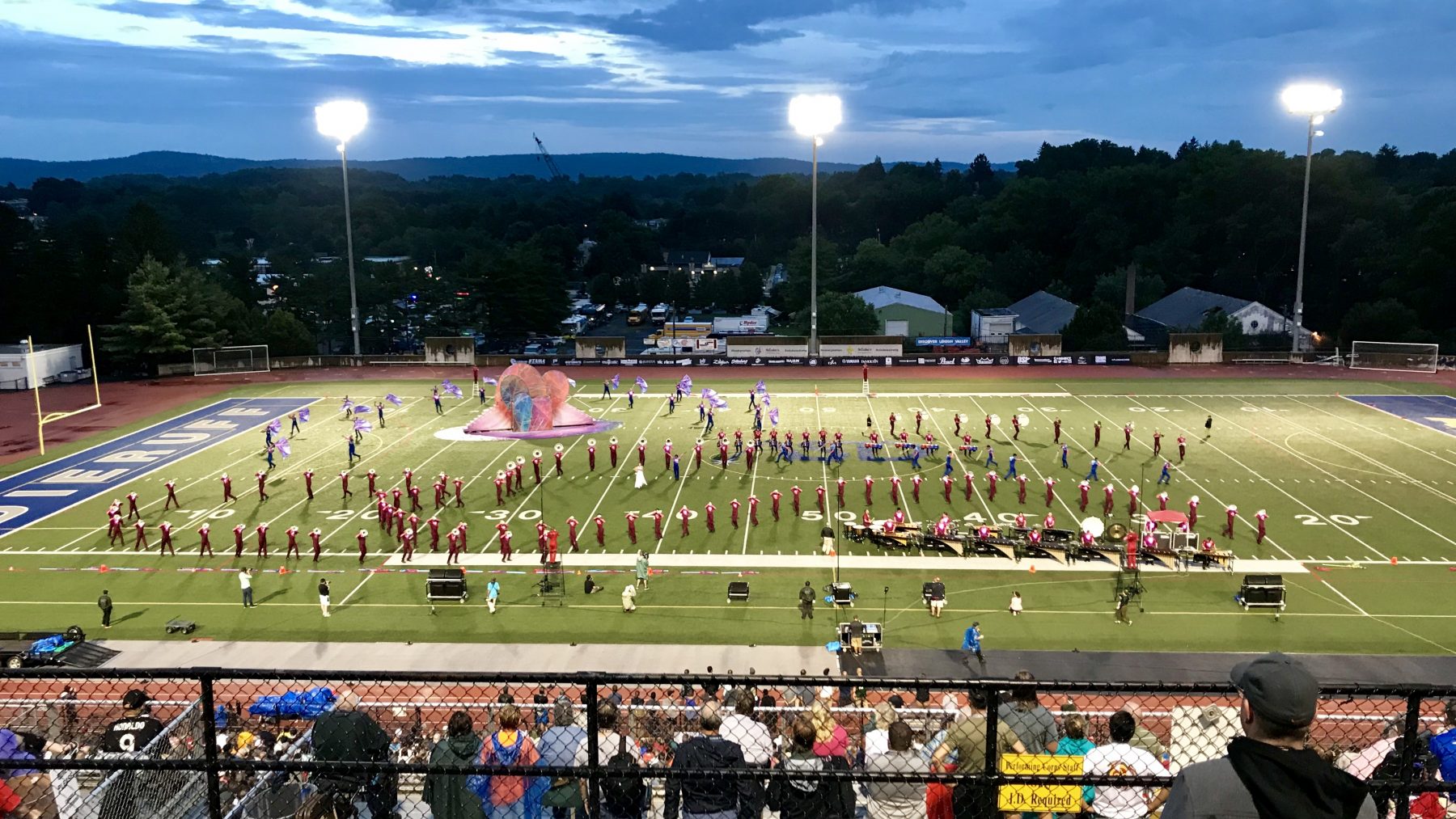 The view from the fifty at Allentown Saturday night.

Ugh! Another rain affected drum corps show. This time it was Allentown on Friday last night. DCI called it off after a couple of soggy performances including a standstill by Mandarins after they blew their soundboard and amp system. It was interesting to hear the pure brass and percussion, though the keyboards do not compete as well with the full frontal of the horns. But wow, there were some powerful brass moments! Following the show, I dashed to the car to meet up with my DC brother Garry and we headed to the hotel to join other friends. Serious drum corps enthusiasts have serious fun, and it was no exception last night with the Karaoke.

Tonight is Allentown Saturday and a planned reunion for many corps in the park next to the J. Birney Crum Stadium. The only problem with that is the park is underwater from the heavy rains last night. Cedar Creek Park is a wonderful green necklace along the Cedar Creek that extends for quit a distance. It is a great place for a walk before the show. It is also the location for the many corps to disembark from their busses and warm up. The trucks and trailers line the closed roadway

separating the park and the stadium. Amid the rumble of the diesels you hear the mishmash of various percussion ensembles and batteries. One drum line last night was totally in tempo with the idle timing of the truck next to them adding an extra dimension to the sound of man’s 20th century engine of progress. Many drum corps programs feature transportation themes including trains, planes and automobiles. However, trucks and cars are the dominant highway-based modes today thanks to the emphasis on funding the Interstate Highway System, rendering American railroads and trolley lines to the rubble of time behind canals. Once again I digress from drum corps. Let’s hope tonight’s show will get me back on track and ignite some more great passion for words to describe the experience.

Earlier in the day Garry and I went to a couple of rehearsals. I completed my mission to deliver some Cabot Cheddar to Rachel of Rachel’s Roadside Kitchen, the Carolina Crown food trailer. I am on a mission to combat the misconception that cheese is yellow, and to learn as much as I can from the top drum corps chefs. Rachel is twenty-two years old and has been cooking for Carolina Crown since she was sixteen. She began working in the food trailer with her parents who volunteer every year. Two years ago she assumed the responsibility as the head chef and now her parents and other Crown family members volunteer to work for her. What another awesome drum corps family story. I have observed that the drum corps chef’s job is the hardest job in drum corps. Rachel was grateful for the cheese and we had a great time talking about the food and fun in drum corps. I learned that the corps serves a butter-substitute spread. I am now on a mission to hit up my friends at Cabot Creamery to also provide real butter for DCI member corps.

It was an amazing night of drum corps in the J. Birney Crum Stadium. My fifty-yard line seat was the best in the house – smack dab in the middle and just above the judges. I continue to describe this as the epicenter of entertainment. From here, the 70 plus horn bells and array of percussion instruments are directly in line with the pinna, the protruding visible parts of my outer ears. The intense concentration of brass and percussion sound is transferred through the ear canal directly to the eardrum and tympanic cavity of my inner ears and through some mysterious metaphysical force, strong signals are directed to my tear ducts, skin, and the OMG center of my brain. At certain times the audio stimulation in conjunction with the visual stimulation of the crazy drills causes an uncontrolled outburst from my vocal chords. This is what drum corps does to people. I have seen it many times from the people next to me at the fifty and beyond. 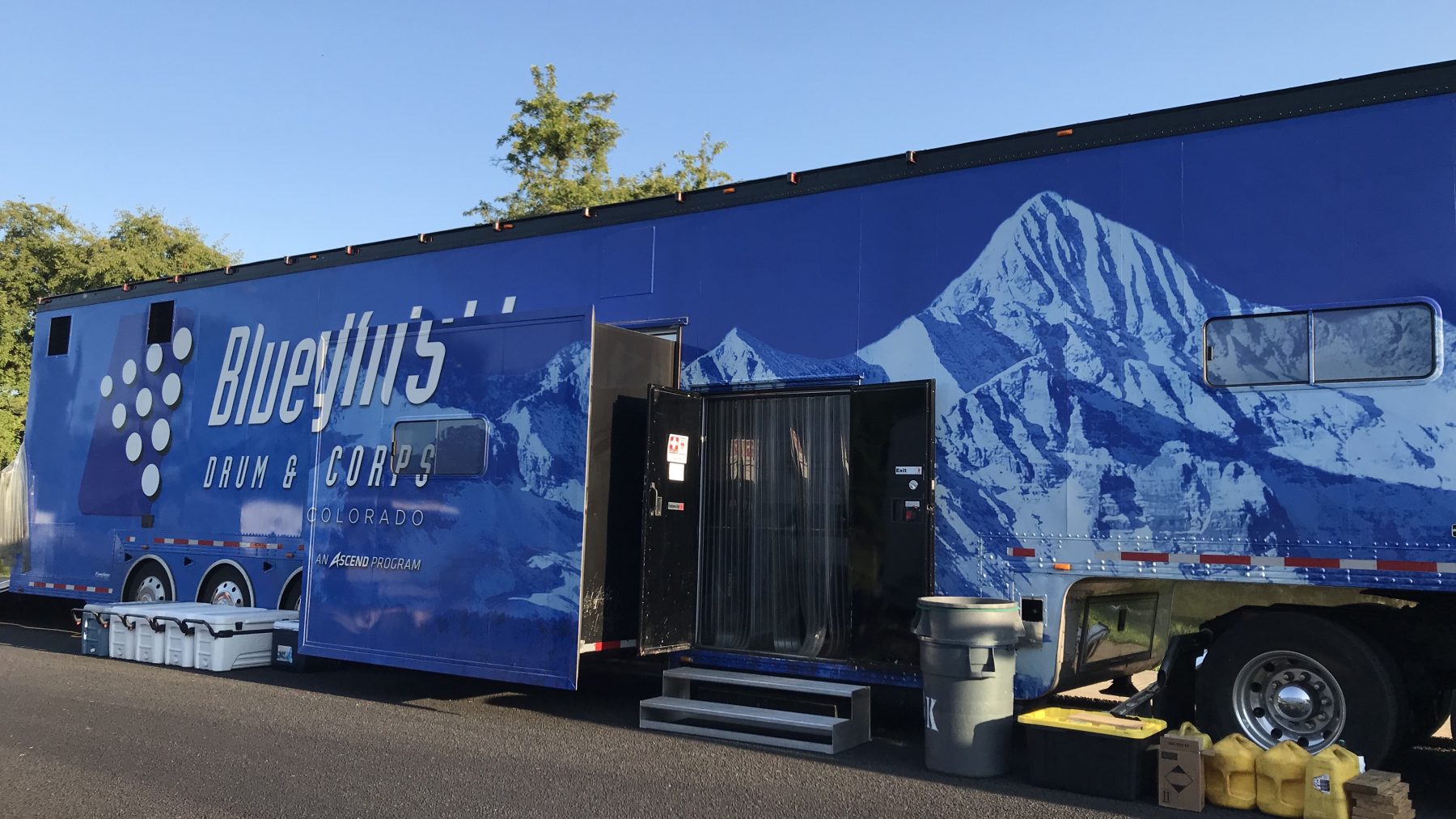 The new kitchen trailer of the Blue Knights.

What a treat to see these shows so many times this year. There are many things that I see for the first time either because I missed them before or they have been added. I have been training myself to enhance my peripheral vision so that I can catch something happening on one side of the field if I am focused on the other. Some shows have a natural flow were you are directed visually where to look by the drills. Often during the drum/percussion highlights, I am watching the battery but missing the actions of the pit or the movements of the horn line. This is why being high in the stands and watching a show more than once is good. What a privilege it is to be alive and in person to witness it unfold in front of me with such precision and vehemence. There was not a corps in performance last night that did not affect me so.

In addition to enjoying the show, I had a great time walking along the road before the show to visit some of the food trailers to say hello to the kitchen staff and thank them for their hard work. The Blue Knights trailer is a model of spaciousness, efficiency and cleanliness. Corey, the chef graciously let me step inside to look around. Earlier in the day I ran into the Blue Knights director, Mark who invited me to run away with his corps next year. I may take him up on that, as I would love to go to the shows out west.

Putting Allentown in the rear view mirror, I headed west toward Pittsburgh for another DCI show. I purchased a ticket for this show as another consolation for missing Chester and it is on the way to Massillon. To break up the trip, I am headed to the Allegany Portage Railroad National Park, a little over half way along State Route 22. It will be a great place to get in a good walk and observe some transportation history. Western Pennsylvania is very hilly. I am worried about the Ghost. Yesterday, driving to Allentown the car ran fine and did not throw the transmission code at me. However on the way to Lawrence the other day, the hilly terrain did. If I make it over the Allegany Mountains, I think I will be home free. This could be wishful thinking.