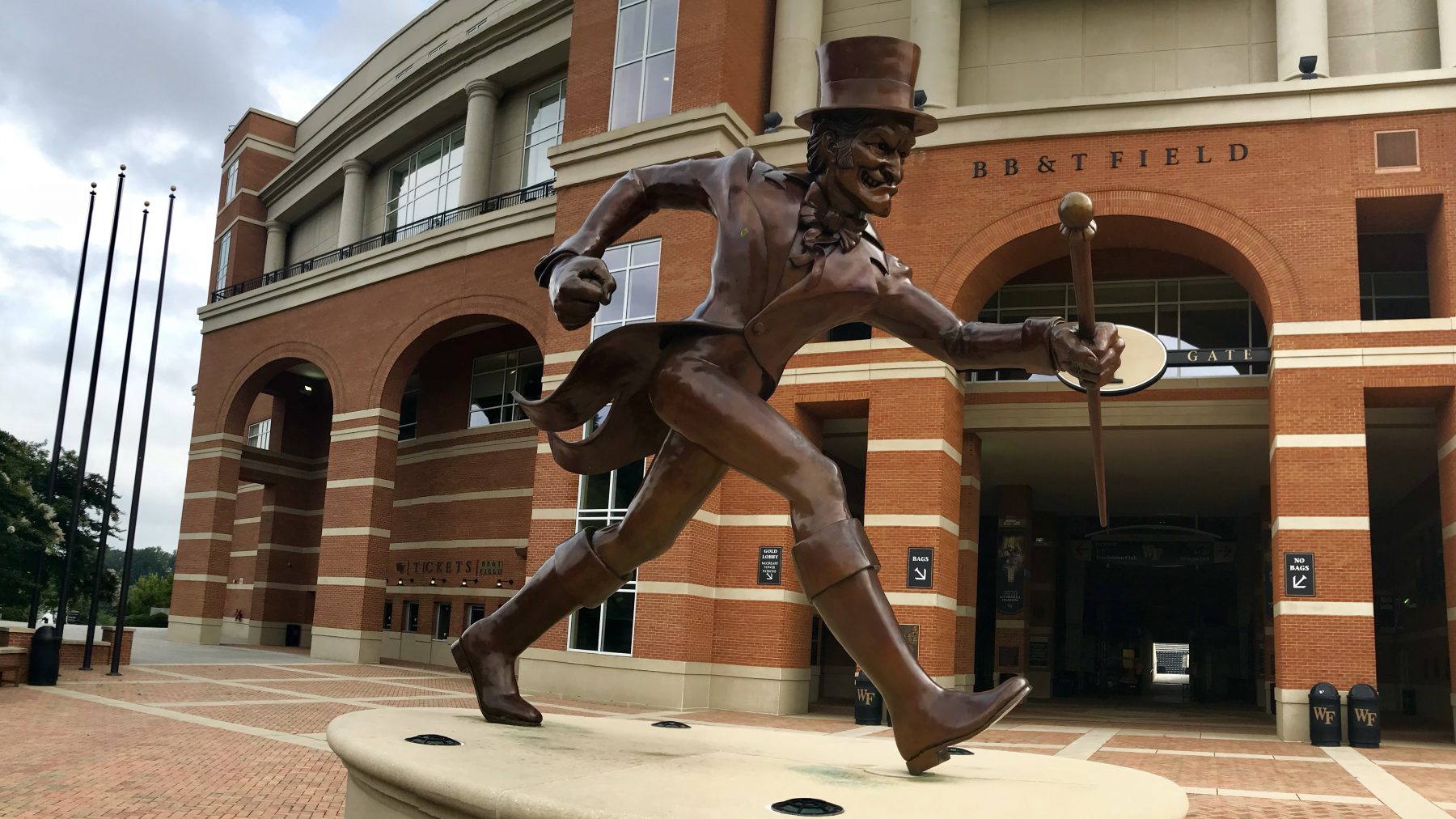 The Demon Deacon in full stride at BB&T Field.

NightBEAT: from the fifty

Last night was one of the best drum corps shows that I have attended yet. BB&T Field and the hosts, the Carolina Crown family did not disappoint at NightBEAT in Winston-Salem North Carolina. Sitting in my excellent seat in the mid 40’s (47-yard line and 46 rows up), I had the best vantage for the amazing night of music in motion. Since my reintroduction to drum corps in 2012, I have purchase tickets as close to the 50-yard line as possible. I was at an older stadium in Fort Edward New York. I did not have a ticket and went up to counter. The gentleman behind the window said, “Your alone, so let me see if I can get you a good seat.” It was at the top of the stands and exactly dead center to the field. What a perspective to watch and listen in the epicenter of sight and sound for my first live drum corps show. That was when I first heard Carolina Crown. I was blown away and have been going to shows ever since, purchasing the best seats. Hey, if I’m going to travel great distances, and at some expense it makes sense to maximize my experience when I get there.

The BB&T Field is a modern stadium with a large seating capacity. As the corps only perform to one side of the field, there were over 8,000 fellow drum corps fans seated beside me from left to right, while the on the opposite side of the stands the seats were empty. The high opposing vertical structure tends to push the sound waves right at the populated side. The modern artificially-turfed field provides a superior consistent surface for the corps’ precise marching ability. As drum corps drills get faster and more intricate, it is ever more important to have a smooth field free of divots to execute with precision safely. Above me are three floors of box seats in the Deacon Tower for VIPs, corporate sponsors and the like. The only downside was the lack of potable water for the masses unless one stood in line for the privilege of purchasing life’s basic necessity for $4.00 a pint, as the public fountains were turned off. This is one of my pet peeves that I will expound on later in another post. 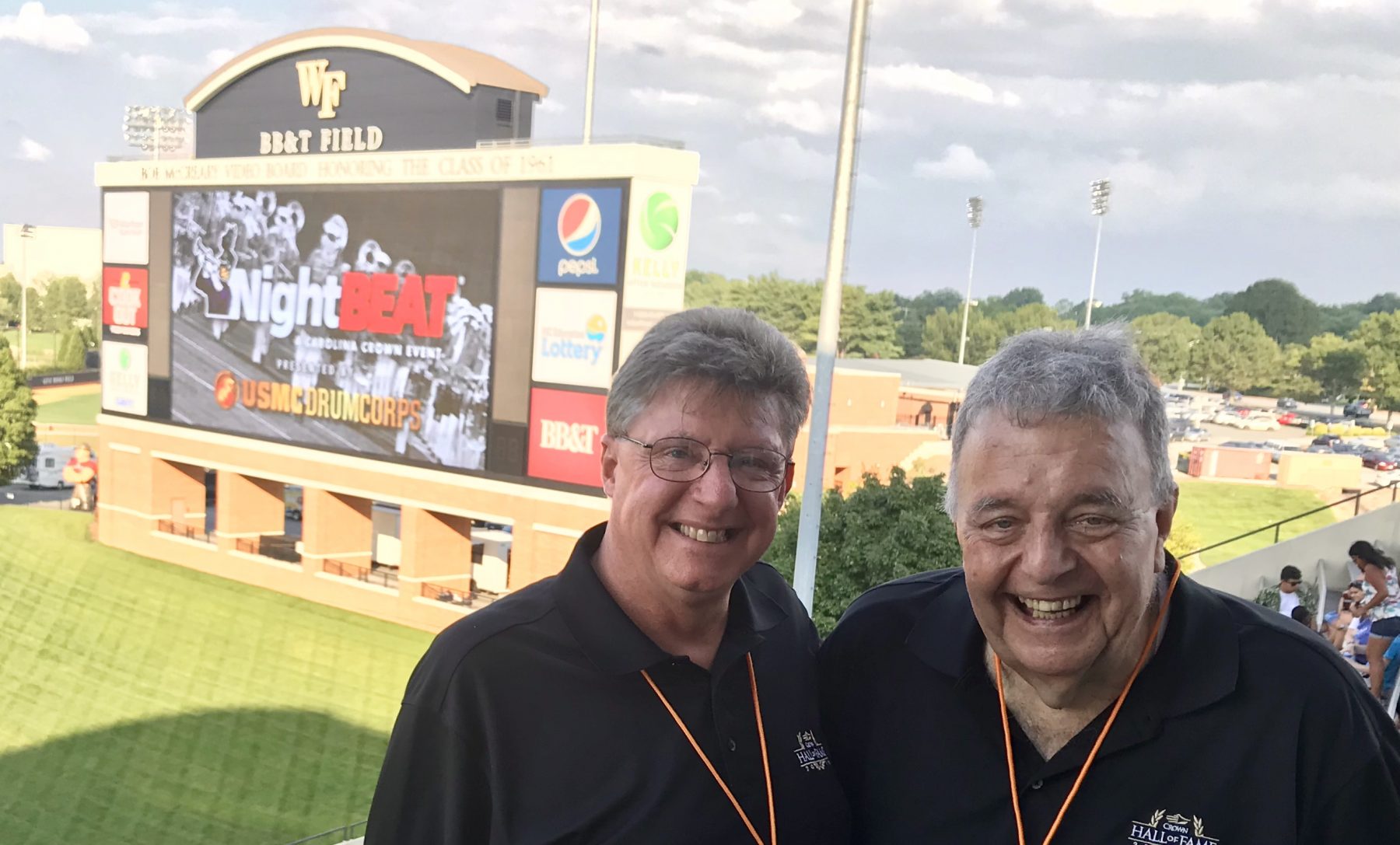 Bill and Doug – Hall of Fame honorees and founders of the Charlotte Drum Corps Association (now Carolina Crown), and NightBEAT.

Earlier in the day, I was invited to attend the Carolina Crown Hall of Fame induction ceremony on the upper floor in Deacon Town (water was free there). I have discovered that when you pull back the curtain on drum corps you find an amazing number of incredibly dedicated volunteer wizards behind the scenes pulling the levers. Crown is no exception by any means and they are too numerous to mention. During the weekend activities, I met dozens of many of the dedicated Crown family members and heard many stories of their personal dedication to the corps. The common thread that ties them all together is the unwavering love for the kids and the activity, and each other. I have never witnessed more hugs than in the drum corps world. Witnessing those being honored and the stories told brought tears to my eyes even though I’m just getting to know these people being that I’m from Vermont and just dropping in on the scene. Drum corps is very welcoming and one forms instant bonds. I look forward to continuing the friendships that I have made in such a short time.

Being a DCI Tour of Champions series show, the competing corps are the top contenders in the activity, rendering a huge return on the investment of that 50-yard line seat purchase. I will leave it up to others to fully articulate the details and reviews of the performances. It is fun to read the forum entries on Drum Corps Planet for the show thread in between shows for wide ranging opinions. Drum Corps World – the online magazine will surely cover the event and provide a detailed review of each performing corps. I will take a second to say how much we all enjoyed the opening performance by the U.S. Marine Corps Drum and Bugle Corps – The Commandants Own. I have seen and heard them before, but this year they have really stepped up their game adding a front ensemble and amplification. Fitting with the sponsorship by the U.S.M.C., the Crown family had invited all veterans in the Winston-Salem area to attend the show free of charge. They were all asked by the announcer to stand and be honored for their service and the appreciative crowd responded with enthusiastic and deserved applause. Two local heroes specifically acknowledged were: First Sergeant John L. Crews, US Army retired; and Colonel Ronald J. Rabin, US Army retired, and current North Carolina State Senator.

From my seat at the fifty I not only have a great vantage point for the show, but it is also a great location to feel and experience the love that the crowd gives back to the corps. NightBEAT attendees are true drum corps fans, not shy about expressing themselves. I was particularly pleased to see a high percentage of young people in the stands. Drum corps seems to have lost a couple of generations but there is hope for the future of the activity as the programs are reaching a younger generation of fans. If you are one of those ODCFs (old drum corps farts) who lament the good old days of inspections, full uniforms, and symmetrical fronts – sorry about that.

Every corps received a well-deserved standing ovation. Of course, Crown received the hometown corps love, as their 2018 program BEAST did not disappoint them. The corps that received the most enthusiastic response with their program Babylon was the Santa Clara Vanguard, currently ranked first in the standing. Babies that were thrown from the stands littered the field – figuratively speaking that is. A corps that has been surprising the fans with their rise in the standings is my hometown corps, the Boston Crusaders (BAC). The BAC kids are performing their program S.O.S. with evident passion fitting of the storyline of being lost 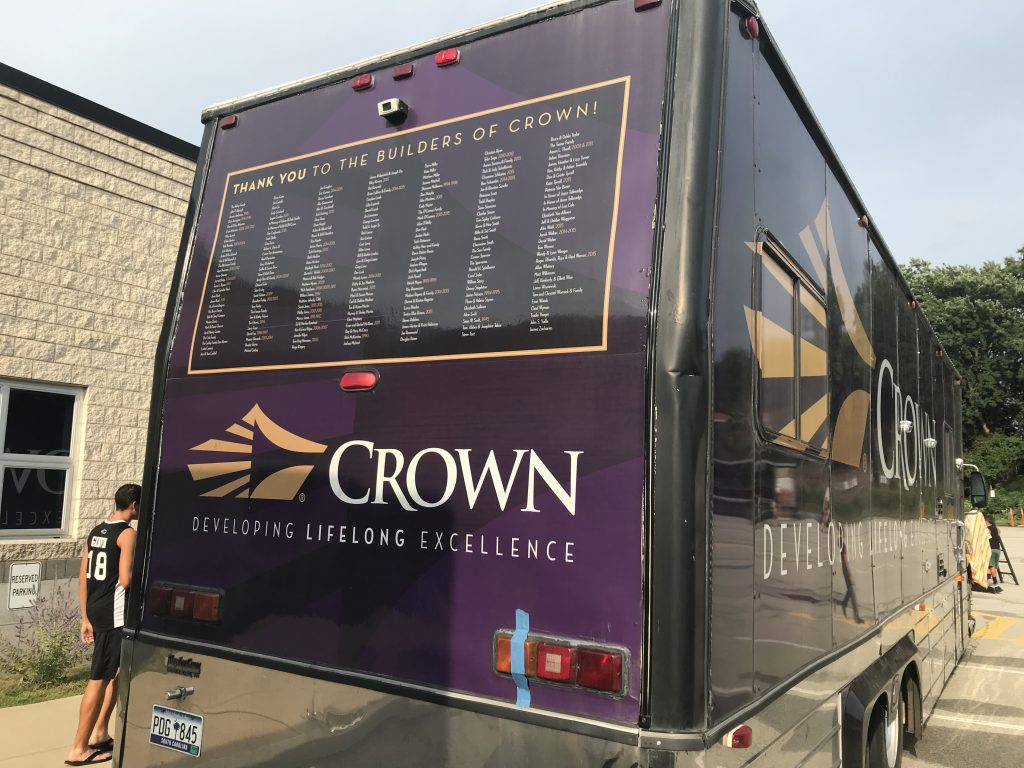 then found on a deserted island (think Lord of the Flies). It was great to see the new endings that the corps recently revealed, such as the disappearing BAC members in a tsunami, depicted by a large blue curtain, that erases the corps from the ocean beach depicted by a tarp located on the right end zone. Many of the fans that I meet in the stands are not aware of the program themes so I try to give them a clue. Frankly, I too am befuddled by some shows. I Googled the famous painting – Nighthawks by Edward Hooper on my phone that illustrates the basis of the Blue Devils program to show my seat neighbor. Before us, the painting slowly emerged as the props reached their final position and the members assumed the characters. The visual masterpiece was equaled by the mastery of the challenging repertoire performed by the perennial champion corps. I have found that even if you don’t get the theme of the Blue Devils, you are still blown away by their amazing talent. That can also be said for all of the corps including Phantom Regiment, The Cadets, and Bluecoats who also highly entertained us at NightBEAT.

This show was a great start to my late season tour and I will be back next year – God willing. The next stop on my drum corps tour is Chester, Pennsylvania for another TOC show on August 1, then on to Allentown, Massillon TOC, and finals at Indianapolis. Meanwhile, I am heading home on JetBlue to my humble home on the Mill Brook for a day to recharge and pack the Grey Ghost (my 2008 Volvo wagon) and occasional lodging site while on the road. I will be bringing more Cabot Creamery, Seriously Sharp Cheddar Cheese for my drum corps families. I am not sure how far the old car will take me because it is showing a transmission service code. I will be traveling over a thousand miles on a wing and a prayer. Wish me luck.