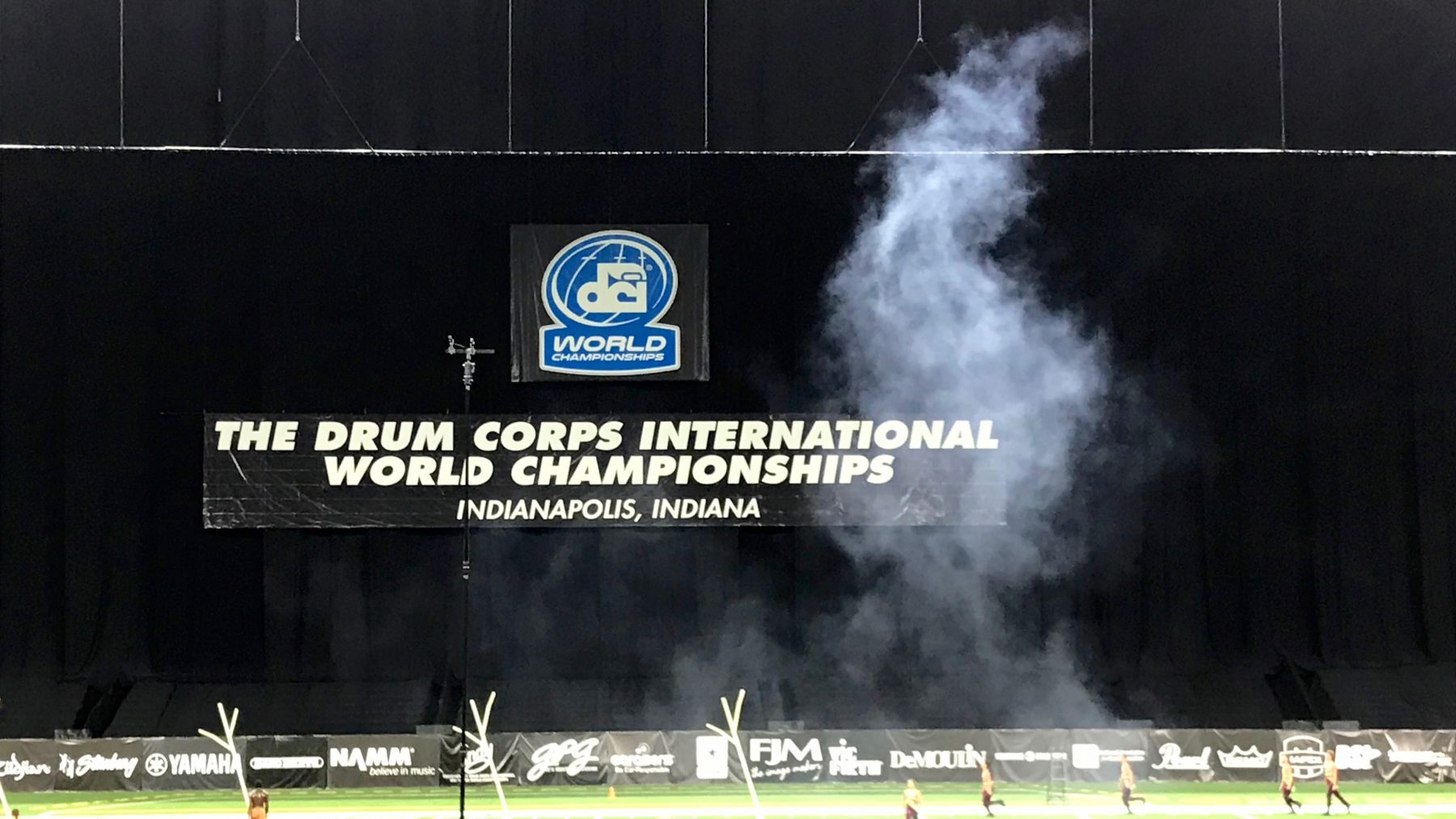 I am in the cafe area within Lucas Oil Stadium after the final performances of 2018 taking a minute to get these words down. After an exhilarating afternoon and evening of intense music and motion, the final line up of twelve DCI World Class drum and bugle corps finished in the reverse order of performance with no change in order from the Semi finals the night before. So, when the faux smoke cleared (from their prop), the Boston Crusaders clinched fifth place in the standings with the color guard garnering the top honors within the activity. There is no doubt that BAC was here. Santa Clara Vanguard took top honors on all other captions earning the Gold Medal and the enthusiastic support of those in the audience with their powerful program Babylon. Blue Devils and Bluecoats medaled respectively with Carolina Crown taking fourth place. The Cavaliers took 6th place, swapping placement with BAC from last year. Following in 7th place – The Cadets. What an amazing transformational year and success for the Allentown based corps given the circumstances they faced as they began the season. Everyone should be proud of them for holding their standing from last year by 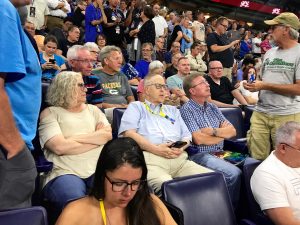 delivering a riveting and refined program including the addition of their classic zipper pull drill and chord structure from Rocky Point Holiday mashed up with the compelling closer. The Blue Stars finished in 8th place in DCI standings, but I gave them a first place in the ballad category, with a very melodic rendition of the Carpenters, Close To You. Love the baritone solo lead in with continued embellishment by the artist when the entire horn line pushes the chorus – da… da, da, da, da…close to you. The Blue Knights, another of my favorite corps dropped to 9th place, which will most likely be a low point for this well supported, highly creative corps as I predict that they will rise again to the top six or seven. What an interesting version of Stravinsky’s Right of Spring – a perennial drum corps theme. Jumping into the finals for the first time this year, the Mandarins came in 10th place. Rounding out the twelve finalists corps were Phantom Regiment and the Crossman. 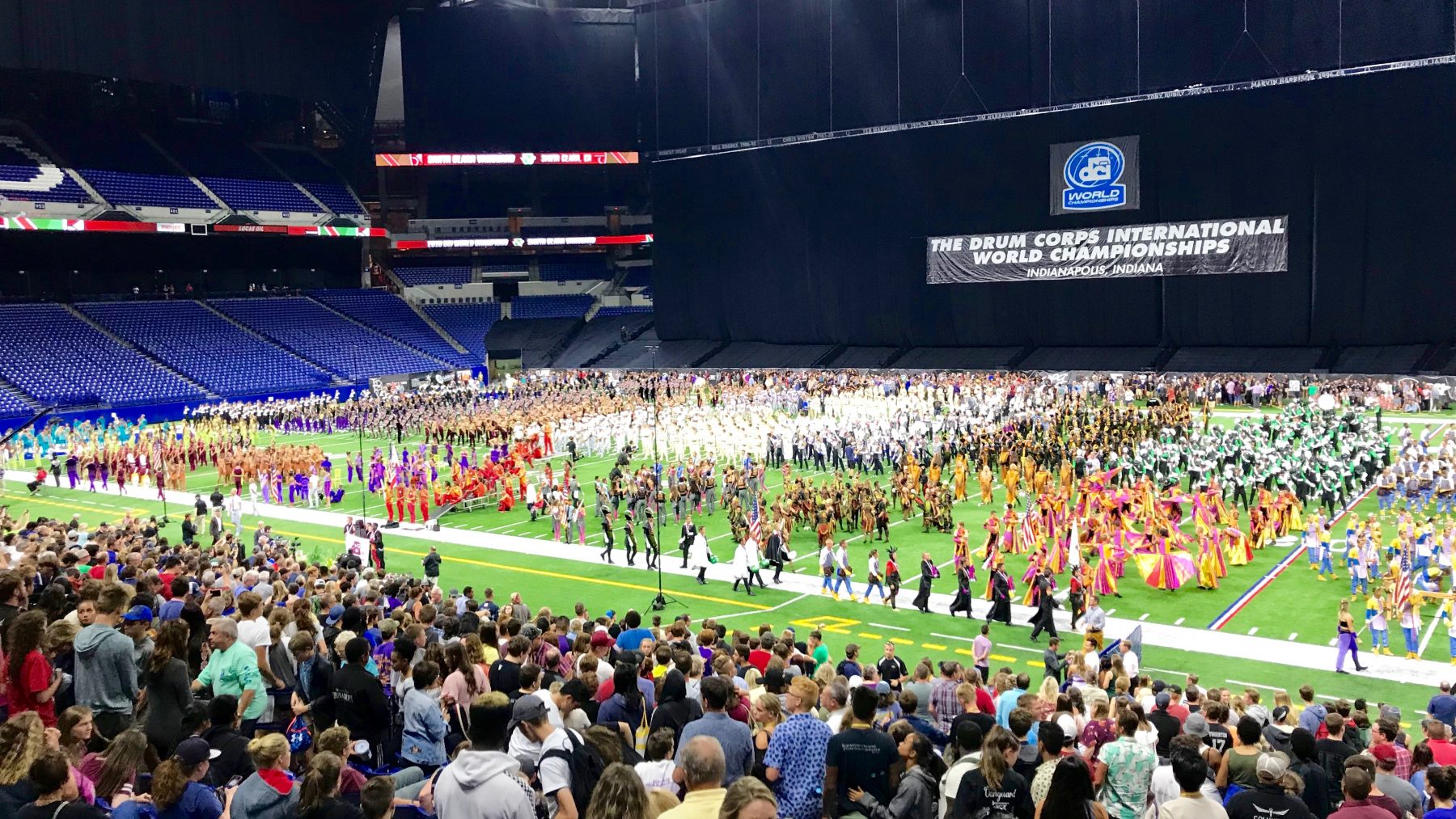 What a fun-filled day it was beginning with daytime music events downtown and finishing with an awesome display of pageantry with roughly 1800 members and 600 staff occupying the field in final 2108 retreat. From coast to coast, these drum corps were well-representative of the unifying power of American youth as exemplified here in Indianapolis this week. This is where I derive the most hope for our future. When you see them arrayed across the 100 yards-wide field, hugging, shaking hands, crying, you know they have become highly infected with the principal that when we work together, we can do amazing things.

I saw, heard and felt those amazing things at my fifty-yard line seat for finals in row 15, slightly higher than the semi finals but still well within the impressive sound zone. I sat next to another fine writer, Tim from the Boston area, so we related quickly. It is easy to relate to people at the fifty-yard line in the stands, as drum corps fans share an incredible bond to begin with. The group of drum corps fans surrounding me at finals were likely the most affected, being associated with the activity professionally as well. What a treat to be sharing the final moments with Tim and other colleagues of Drum Corps World in section 140. Thank you, again Publisher Steve!

One would think that having seen the performances several times by now that it might not be as impactful – quite the opposite. Each night of finals, the energy of the crowd intensifies, which translates out to the field to the members. Or, is it the other way around? There is certainly synergy between the two contingents. As I turn and look up at the stands above me during the moments with everyone on their feet, I observe the amazing ardor of the animated fans all the way to the reaches of the upper corners. I cannot imagine what it must be like for the members on the field who have pulled those thousands of strings. I get a real jazz at my seat, for sure from both the field and the fans. 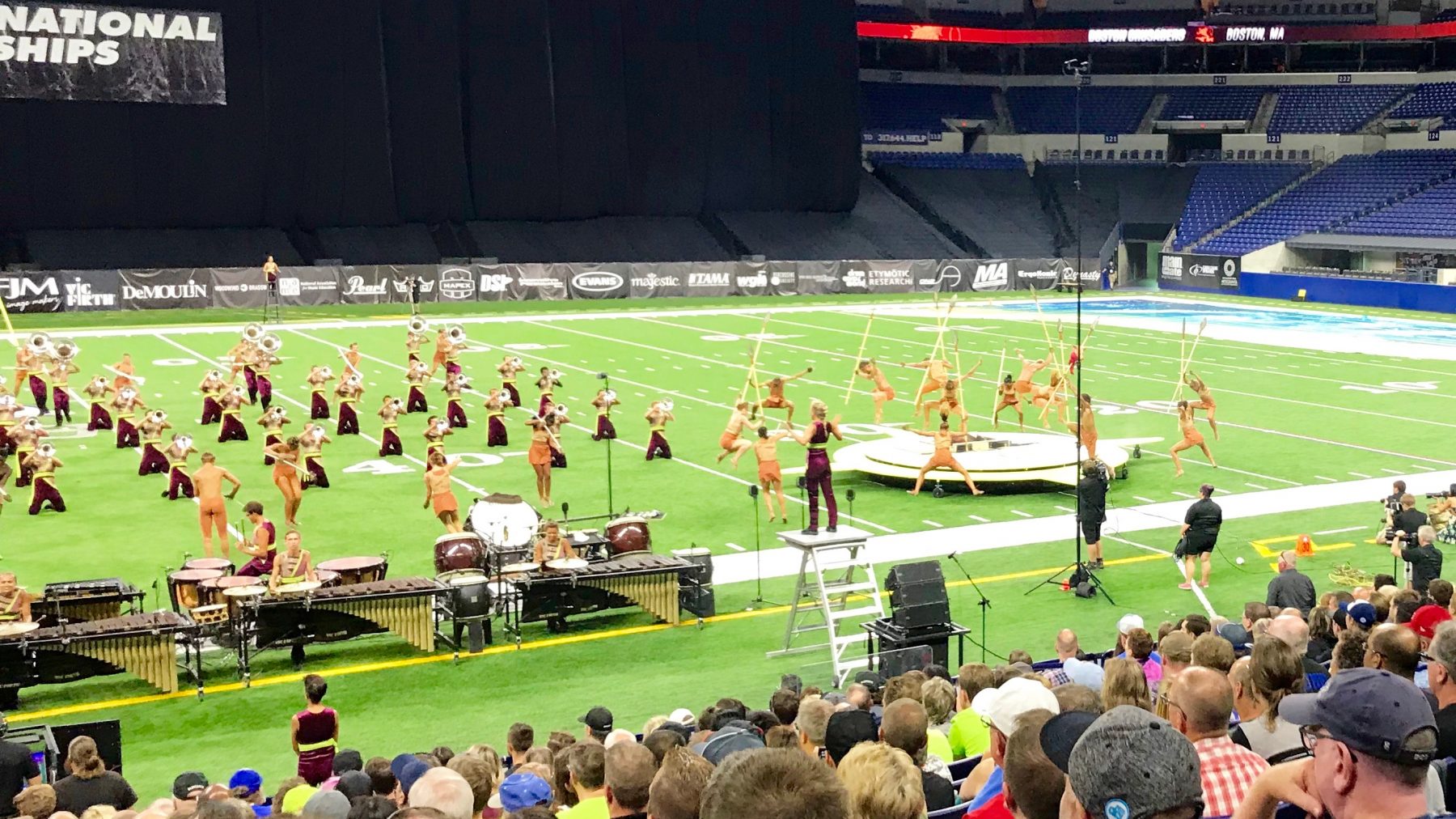 The OMG moments are too numerous to mention but some highlights really stand out for me. As humans are natural hunters, we respond to sound and movement, especially sudden movements such as the unified horn snap, which SVC deftly demonstrates. At one point when all the horns are arrayed atop the props lined from end to end, first preceded by a short pause, the entire line of horns snap into place followed by a powerful unified brass explosion. That combination of sight and sound ignites us. A similar move by the Bluecoats was a fake out when the horns snapped up, but then lowered them back down slowly without a hint of a note. They later blew our minds with the Billy Holiday special Session 44. My grandfather’s Dixieland jazz band, Russell’s Tomcats, performed on Saturday nights at a lounge called Club 44 in upstate New York. As a child, I was blessed to have two trumpeters in my family, my father and my brother Danny, who was very accomplished and an ardent drum corps fan. He died young and was the inspiration for my 21st century drum corps fanaticism when I rediscovered the activity in 2012 after a 40-year hiatus. Oh how I remember those early 70’s shows in Rochester, NY watching with him. I digress.

I never tired seeing the Blue Devils assemble the Nighthawks painting. How poignant does the lady in red saunter into place to complete the scene as a soft ending after the corps took us on a fast-paced journey through the urban nightlife. Horn lovers delighted all evening, especially with the prowess of the Carolina Crown as they continued to push the envelop on complexity of the musical book and movements. There were few moments when the horn line was not moving fast while playing with precision and clarity. Having gotten to know the Crown family, and the extreme dedication of their board toward life long excellence within all communities, I am especially proud of their fourth place finish.

Of course, as a Vermonter I am also very proud of my hometown corps, the Boston Crusaders (all of New England is Boston Nation). Having had the pleasure of observing their show evolve from the very beginnings in Spring training, it has been a joy get to know it so well and see it flourish. It has also been interesting to see the audience respond, more enthusiastically each time the story is told. Arguably, the best drum corps show of their long-standing presence in the activity. 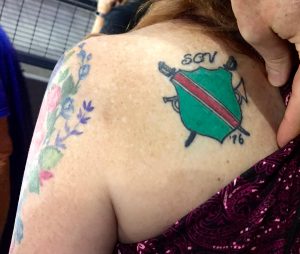 I am going to wrap up this post for now as I have some business to conduct. I am buying some props from the Boston Crusaders in the lot – the spears that were used during the primal conflict. After finals, the lot becomes sort of a market place as corps purge their props, instruments and other misc. items from the tour. It was fun to see Steve, the prop guy and his team fashion these faux implements of primal conduct at spring training. I plan to incorporate them into the railing on my new deck overlooking the Mill Brook where I do most of my writing when at home. Tomorrow, I will be headed back there where I hope to post some final reflections on the 2018 drum corps season. For now,  I am traveling home in my new Silver Bullet, and into the void of no live drum corps for another ten months. Really?!!