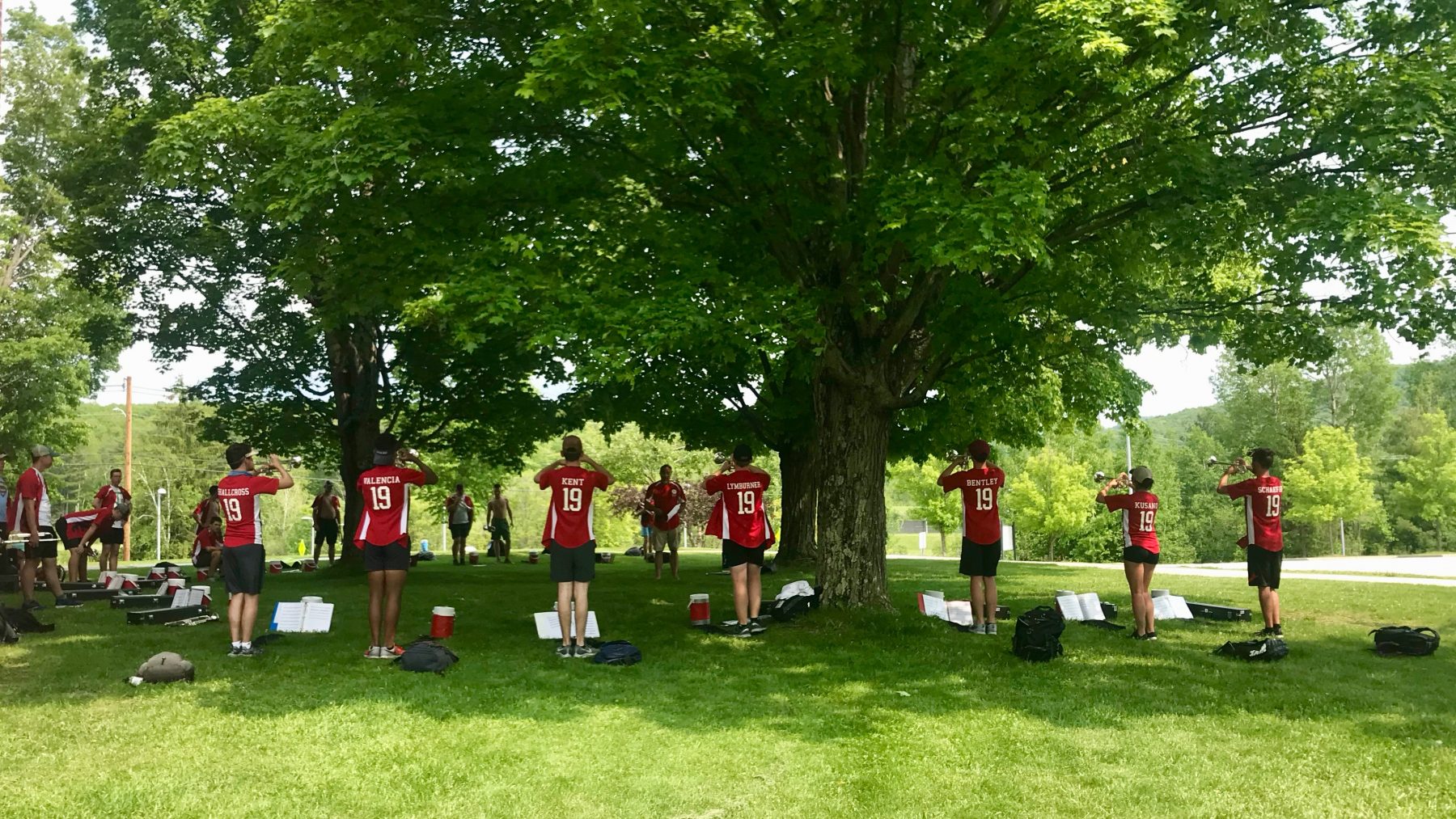 The Boston Crusaders trumpets warming up in the shade at Castleton University under the direction of instructor, Steve.

It has been a long winter. Fortunately for me, it was a snowy one. With over one hundred days of skiing, many of them teaching, I can attest that it was a great off-season from drum corps. Back in 2012 when I rediscovered drum corps, I was excited to find a summertime activity that equaled my enthusiasm for my favorite wintertime obsession. So now that it is late May and the skis ready to be put away, I am beginning to get really excited about the upcoming DCI season. Shows are being announced and I have been studying the themes and repertoires in preparation of seeing and hearing them live and in person at several shows again this year. Of course, I will begin following my hometown corps, the Boston Crusaders (BAC) with a trip to Castleton University early next month for a sneak peek of Goliath during spring training. I am certain that the designers, instructors, and the ever increasingly talented members are working their tails off as I write this. As I’m sure all of the great corps are, too. I expect this to be a very competitive season.

Two years ago, I had the privilege of touring with BAC for 23 days as a volunteer, going all the way to the World Championships where they ascended astonishingly to 6th place, up from 12th the previous year. I wrote about the unique experience daily in this blog that was republished as a nine-part series in Drum Corps World – I Ran Away with the Drum Corps. Last season, I returned to the stands where I had the best seats in the house, once again writing about the experience, covering a dozen shows including the Championships in Indianapolis thanks to Publisher Steve, with my series From the Fifty. This year, I am not quite sure what my focus will be. I have been hopeful that I will some day meet a companion of the opposite gender who I might tour with. Being a Vermonter where the activity is not as well known, my enthusiasm for drum corps is hard to explain to my friends. Is there a dating service out there for drum corps enthusiasts? Single, male, nice guy, still learning, plays piano, drum corps fanatic……..

Last year, I focused on a few ideas that would improve the DCI experience for fans and members including the availability of plentiful free, safe drinking water for fans, better food choices for members and fans, and improved air quality in the lots with reduction on buses and trucks idling. My first effort will be to research the stadiums that I will be visiting to ascertain what options that fans will have. Some stadiums allow your own water bottles while the larger ones do not. At NightBEAT, there were no operating public drinking fountains, leaving fans with only one option – wait in line at the concession stands to purchase overpriced bottled water. Secondly, I will be working with my friends at Cabot Creamery in Waitsfield, VT to provide more Seriously Sharp Cheddar cheese and real butter to BAC. Remember that cheese is not naturally orange in color and margarine is synthetic food, one molecule away from the plastic container that comes in. These kids deserve better.

And then there is the mater of the idling buses and trucks in the lot. Why is it that the healthiest kids in the country are subjected to the noise and poor air quality caused by the dozens of diesel engines rumbling along in the parking lot. Surely there can be an initiative to curb the negative environmental impact. How about DCI instituting an idling reduction policy and advocating for alternative power sources to keep the buses air-conditioned. We can be better. This summer, I hope to learn more about steps that can be taken to improve this negative aspect of an otherwise very positive activity. Meanwhile, I will be bingeing on YouTube selections of the pieces that I will be hearing this summer in advance of what should be a very exciting season for youth music education and the over-stimulation of my hippocampi at the fifty. I will keep you posted on my plans. And, please let me know what you think. 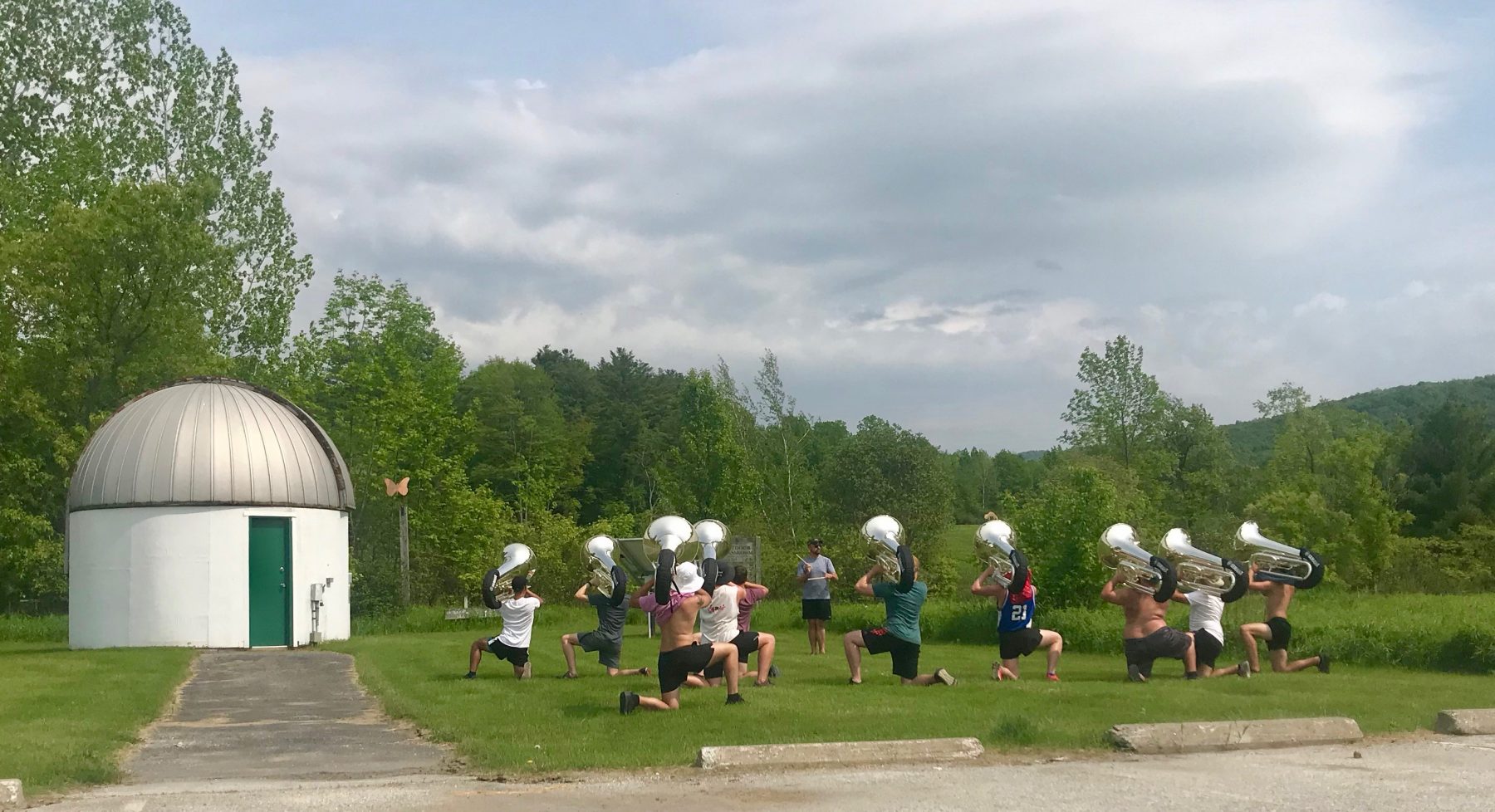 Instructor, Ryan working with the tubas.

I just returned from Castleton University in Vermont, visiting the Boston Crusaders Drum and Bugle Corps (BAC) at spring training. What a delight to hear that wall of sound again. You know, that horn line right in your face? Oh, how long it has been since August of 2018. It is hard to say with just one listening session, but I think this BAC horn line is even better than last year’s. It was also a delight to see some good fiends again – some of the BAC family: Dr. Vivian, Jack the tour manager, instructor Steve, Norm the prop guy taking over for Steve, and the stalwart volunteers Rick, Mary, Kevin and Mark. Never have I met such dedicated staff and volunteers. I use to think that I was an over-volunteer person until I became acquainted with drum corps up close.

I was also on a mission to return six of the spears that were used in the 2018 program S.O.S. I had purchased them in the lot after the championships and planned to incorporate them into my new deck railing. However, I chose a different railing system and decided to return them as important souvenirs of the number one color guard in drum corps. I also brought some grippy work gloves and a role of Gorilla Tape for Norm the prop guy. It will be a long season loading and unloading the props and regalia that will make Goliath come to life. Norm and his crew clearly have their work cut out for them. 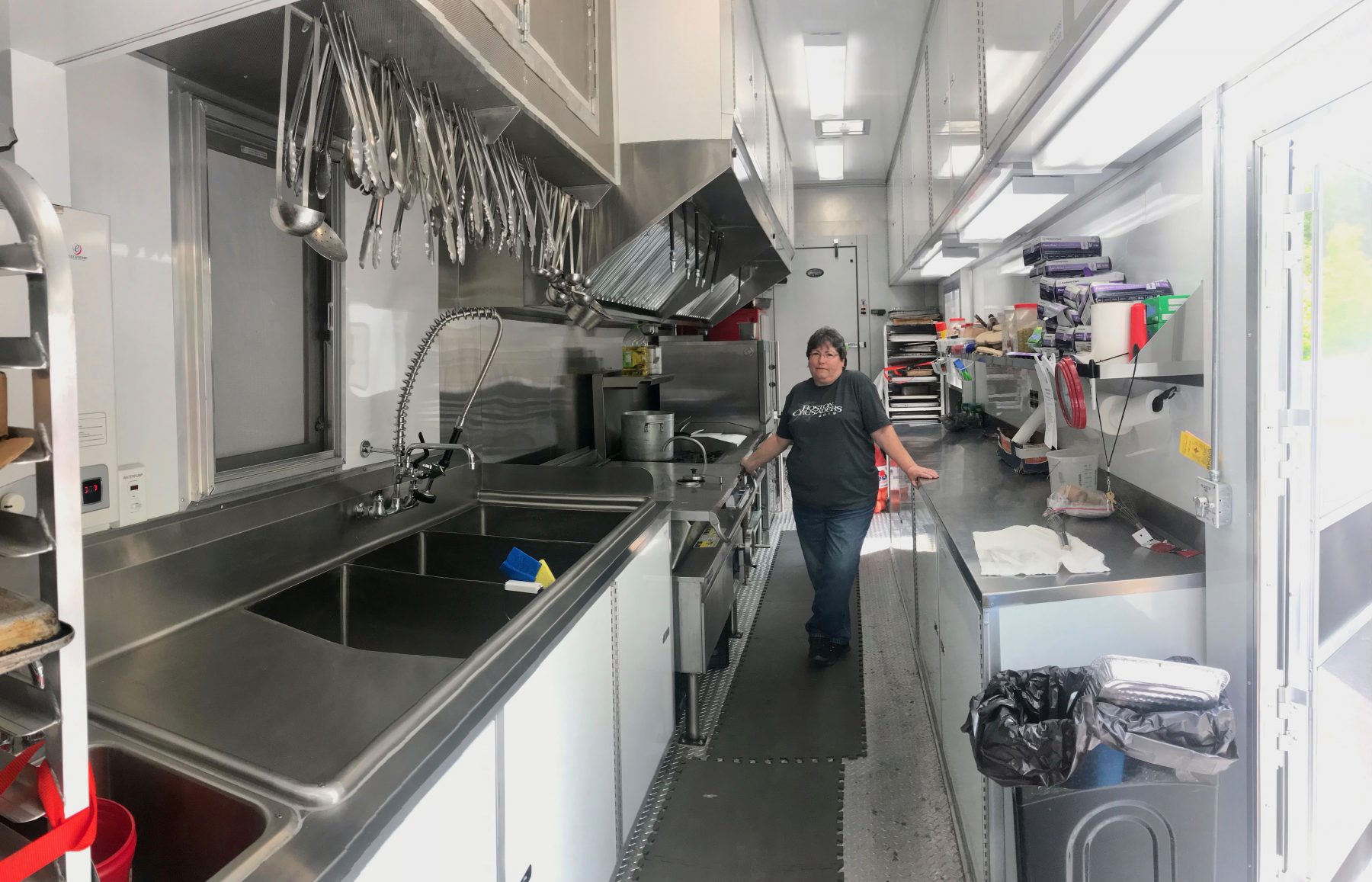 Being that it is still too early to divulge much of what I heard and saw regarding the 2019 program Goliath, I will only say that triumphant is a word that best describes the feeling of the sound. I observed some new horn types, heralding a new sound for BAC. I also had a peek at the new uniform. I will say that it is very fitting of the program and will probably be much more acceptable to those who found last season’s dramatic change objectionable. Props are another story to be told later. Heavy is a word that was often used to describe them. What I can write about and photograph with great delight is the new BAC food trailer. The old tired trailer, which I worked in two years ago has been replaced by a state-of-the-art kitchen on wheels with ample refrigerator, freezer and pantry space. At spring training, the members are eating three meals a day (close to 4,000 calories) in the University cafeteria, with evening snack served out of the kitchen trailer. Amanda, the corps chef was not there so I did not get a chance to talk about cheese and butter. Looks like there is plenty of room in the refrigerator to stock up on some Seriously Sharp Cheddar from Cabot Creamery.

That indomitable BAC vibe is pervasive around campus and the feeling is very positive. The instructors, designers and members are all working diligently through the book, putting the drill and music together piece by piece. If you have not been to a rehearsal to observe such hard work and dedication, I encourage you to do so. Check out your favorite corps housing locations while on tour and spend the afternoon watching. It will exhaust you just watching them do take after take in the hot sun without flinching. Frequent water breaks punctuate the arduous schedule. Funny how the members appear to be paler and chubbier than when I last saw them rehearse back in August 2018. They will surely become bronzed and fit again by the end of this season. Let me not forget to mention the many moms and dads who come here to spring training, and to the many other stops along the way during the season, to lend a hand. This corps, like all the other DCI corps, had an enormous extended family.

Obligations back home prevented me from staying for the evening rehearsal of the entire ensemble on the field for the first time, so I plan to return later in the week for another preview. It will be fun to see Goliath come alive. You can be sure that I will keep you posted with any news that I can share. Meanwhile it’s time to put the skis away, mow my lawn and go visit the grand kids.