Maybe you know the story of David and Goliath. It is a symbolic underdog story of mere David of the Israelites pit against the Philistine giant Goliath. The unassuming David slays Goliath with a single shot to the head with a stone from his sling. This is the story that the Boston Crusaders Drum and Bugle Corps (BAC) is bringing to life with its 2019 program entitled, Goliath. I have been visiting Castleton University, the location of spring training for BAC where I am witnessing the awakening of the Giant.

The dynamic production has an eclectic musical repertoire including some recognizable themes such as Fanfare for Rocky by Bill Conti. Other familiar pieces include Giant Steps, by John Coltrane, Everybody Wants to Rule the World by Tears for Fears. My Shot by Lin-Manuel Miranda is dubbed into the soundtrack. Triumphant pieces, On the Shoulder of Giants by Peter Graham, and Once Upon a Castle by Michael Daugherty fit the story line well. 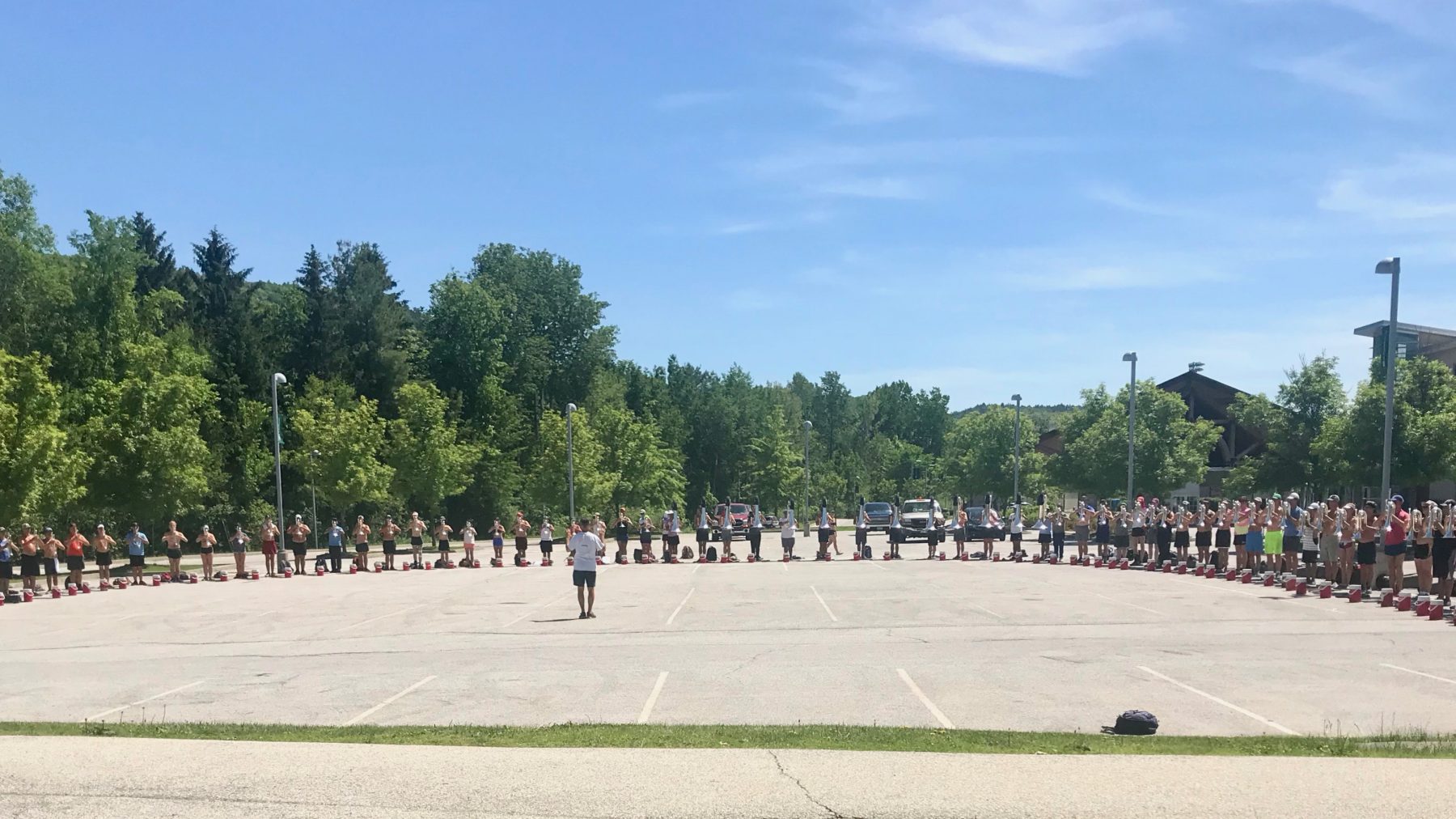 Gino running the horn line through some warm up drills. Lots of pointing was observed.

To accomplish this, the BAC horn line has added some new horn types. I counted a total of eight different brass instruments. In addition to trumpets, mellophones, baritones and tubas, I observed herald trumpets, trombones, a French horn, and a concert euphonium. The later two are featured soloists, playing side-by-side during the ballad. Brass head, Gino, said that there are 76 members playing 100 horns. Once again, the BAC percussion ensemble and battery have their work cut out for them, and work is their middle name.

Gino Warming up the hornline.

The visual aspect of the program is fast-paced and with many close quarter movements and drills that challenge the marching members and the World Champion color guard. To say that they are taking things to new heights, is an understatement. The props elevate the movement and sound, projecting the power of the enhanced horn line and percussion directly into my welcoming ears. Drum corps shows are becoming increasingly three-dimensional, by adding vertical scale with props, stilts and ever-higher tosses. The height and weight of the BAC 2019 props are truly of Goliath proportions.

The biggest take-away for me visiting spring training again is seeing several more friends that I have made over the past three years with the BAC staff and volunteers. Assistant Director Ron is back. He is the steady hand that guides the operation while on tour and provides inspiration to the young members as well as the army of operations staff, instructors, drivers, interns, and volunteer that make up the traveling cortege. Al, the head driver who will be pulling the new food trailer, is on staff and ready for the 30,000 miles that he will guide the BAC fleet of four tractor-trailers, five coach buses, a pickup truck trailering two ATVs, and a Sprinter van. One person in particular that I have gotten to know and appreciate is Vivian the corps doctor. She is available to the entire BAC community 24-7. She is ever present on the field during rehearsal and in the cafeteria where she has sort of walk-ins who come to her for all manner of maladies including many sore joints and muscles. Tape is applied liberally along with Ibuprofen. You will know Vivian by her companions the red Craftsman rolling medical kit that she hauls around, and the yellow defibrillator case that she carries. Maura is another unsung hero as a volunteer on site helping the guard with wardrobe challenges. She also instructs for the Jersey Surf. And, let me not forget Steve the all around utility drum corps mister fixit, never stops or drops. These are a few of the people who drop everything else in their lives to hook onto this train. 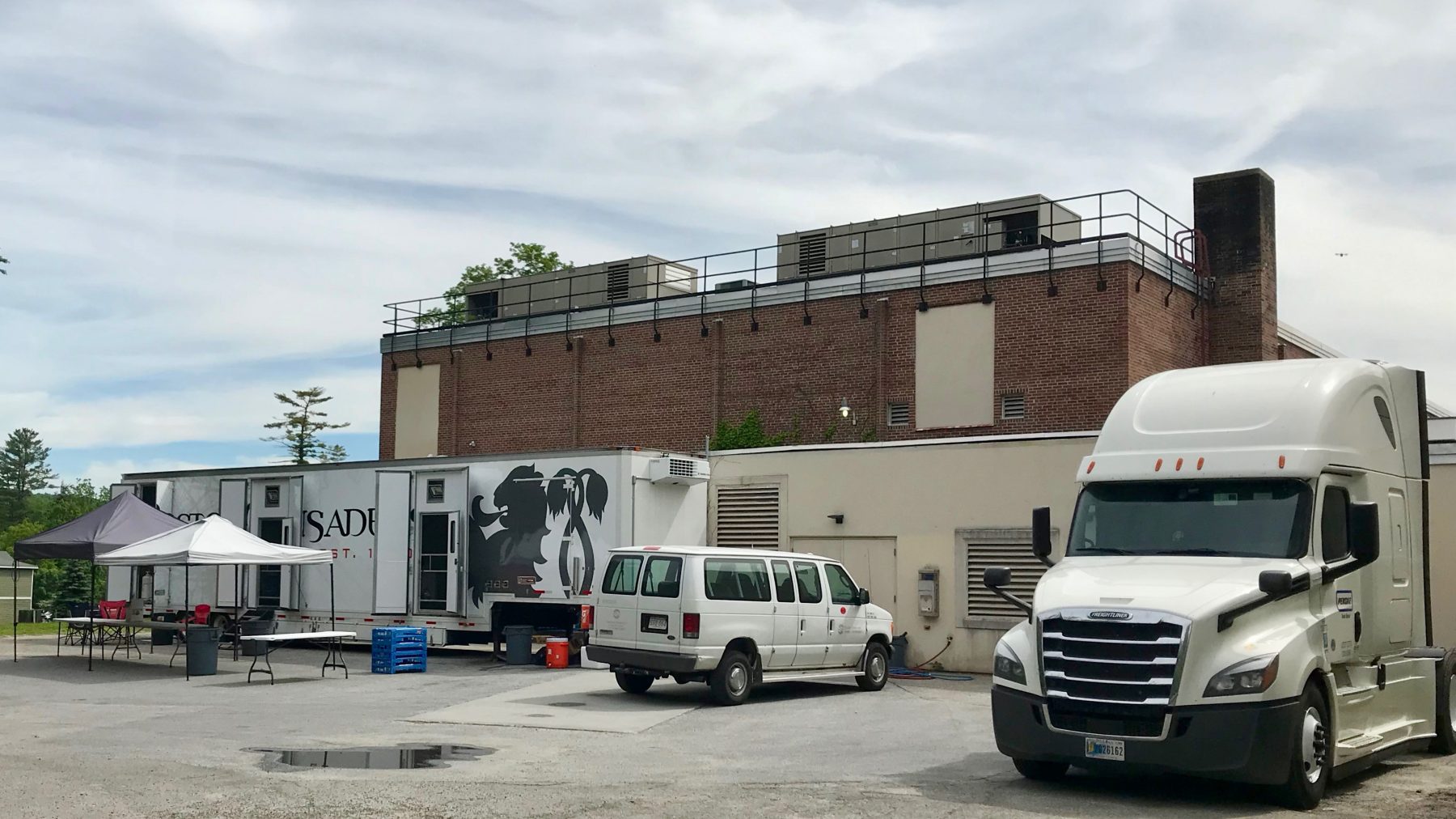 The BAC food tractor and trailer, ready for the long haul driven by Al to begin next week.

Spring training is an intense process where the geniuses that create the program content come together with the talented instructors who work hard to bring it to life on the field with the incredibly dedicated kids who pour their blood, sweat and tears into getting the show ready for prime time. I had the chance to see a run through of parts one through four last night. The BAC sound is richer in texture with additional horn types and some very intricate arrangements. They are stronger and more powerful than I remember from last year. The percussion sections are getting one beat better every second at a time as they continue to perfect the demanding rhythms. In fact, you can hear them playing every second of the day echoing off the hillsides of Vermont! The entire corps is amazingly clean with the very challenging choreography for this time of year. I will be back here at Spartan Stadium in Castleton next Monday for Community Night where I expect to see another great presentation by AD Ron and the opening preview public performance of Goliath. This year they may be in uniform. Meanwhile, it’s time for a run. Watching these kids work so hard is an inspiration for me to keep up my physical exercise. I’ll keep you posted when I get back along the Mill Brook.