I’m sitting here at San Bernardino Valley College on a sweltering Sunday afternoon. Tonight is the third and final DCI show on my California tour. The early corps have arrived for warm-ups. The steady drum beats of the early regimen echo off the walls of the modern buildings. My plan for this evening is to work the lot, shooting the behind the scenes, interviewing people, and maybe record some horn line warm-ups. You can bet that I will be following the Blue Devils to their warm-up location. The first video that I saw when I typed ‘drum corps’ into YouTube back in 2012 was Space Chords, their popular warm up from the early 2000’s. I was hooked on drum corps after watching that and other videos, and learning about this amazing youth activity – DCI.

A welcome breeze, shade, and a comfortable chair provide at least a tolerable climate and comfort for catching up with you on the Rose Bowl show last night. What a treat to be in the 100-year-old iconic structure. It is in fact a very large concrete bowl with 75 rows of seats in a graceful ovoid shape with a real grass field. Nothing artificial here, just pure, natural grass and love. I was privileged to be a guest in a box seat above that level, the highest that I’ve ever been in a stadium for DCI. My hosts were the Tanakaya family and supporters of Pacific Crest Drum and Bugle Corps. If you read Drum Corps World (DCW) online magazine, you surely have admired the work of Russell Tanakaya, one of DCWs most prolific photographers. Russ’ wife, sister, and brother enjoyed the view up top with me, while Russ was on the field shooting with his long lens. The Tanakayas sponsor six Pacific Crest members each year as part of a scholarship set up upon the death of Russ and Beth’s daughter Lindsay, a former member. If you’ve read my blog over the years, you know that I acknowledge that DCI=Love, Family and Friends. I have a newly self-adopted drum corps family.

Russ engaged me in media project to promote the Pacific Crest Outreach Program that was set up to get more students to come out to DCI shows. This is right up my ally, as I believe that music unites, and the kids really benefit from music education. By and large, we have been doing a great job in the US to provide opportunities for music lessons, and programs. But, following Covid’s interruptus, we have more work to do to get the word out about this incredible opportunity. I joined Russ’ team in photographing the bus loads of kids and interviewing the adult chaperones that Pacific Crest and partner Stanbury Uniforms sponsored to attend the show in the Rose Bowl last night. I spoke with the Raul, Director of Bands at Downey High, who brought about two-dozen kids. He is psyched for the kids to have the opportunity to witness the focus, discipline, and the fun of the activity. From their mission statement: “The Downey High School Music Program is committed to fostering a sense of teamwork while empowering its members to become excellent performers, leaders, and citizens.” Yup, that’s what this is about. Earlier in the afternoon, PC hosted a reception for regional HS band directors in support of this mission. The kids in uniform are great models for these newbies. I heard lots of high-pitched cheering from the stands below from the enthusiastic youth in attendance. Many of the corps now have some sort of outreach at their home shows. Kids in their band shirts provide a colorful array with large groups bunched up in the stands beyond the 35.

Before I took my place in the stadium, I walked the grounds and watched the groups of performers disembark from their motor coaches and march out into the grand open field adjacent to the stadium for warm-ups. There was plenty of room for the corps to spread out. Early summer provided a good sun well into the evening. After a good dose of the lot, I headed into the stadium to enjoy the show from up high that also provided a great view of the brown and pink SoCal landscape beyond. The surrounding mountainsides jutting above the stadium rim in the distance, once silhouetted against the darkening blue sky, faded to dark after intermission. The stadium lights gave ample viewing of the entire massive bowl and field for the one thousand plus marchers to perform under. This was a pleasing, balanced light, unlike many of the new cold LED stadium lighting found today.

All the corps that performed in the Rose Bowl last night were treated to love and support from the Southern California fans who have been longing for DCI to be back in the Rose Bowl since June of 2019, a 35-month drought. To start off the show several creative and fun world class corps performed including Vessel, Incognito, Impulse, Watchmen, Golden Empire, and Gold.

The line-up for the evening included the same as the San Diego show with additional open class corps, and the oft world champion, the Blue Devils from Concord, CA. This is their first public showing of Tempus Blue, their 2022 program that includes a repertoire of blue-themed music with some striking blue uniforms in the iconic Blue Devils’ 21st century style. This is an awesome show that highlights the talent and acumen of this top finishing corps and has a lot of recognizable BD moments. This show will grow on me, and you know that they will take it to another level by finals. My plan this evening in San Bernardino is to follow the horn line through their warm-up and then into the stadium.

Santa Clara Vanguard is also back on the scene with their powerful sound and fast drills, with a mix of meditation in their show – Finding Nirvana. Watching this show develop over the season, I’m sure I will achieve a transcendent state of clarity and enlightenment, including goose bumps and tears. The Mandarins brought their raw spirit and inventive machinery of props, marchers, and instruments including 22 brass-toned trombones to portray THE OTHER SIDE. I love the way the entire marching members, along with the rolling scaffold/props, advance in unison diagonally from left rear toward the center with the music gradually gaining intensity. The Academy from Tempe, AZ was the only out of state corps, performing their purely imaginative show – A World of My Creation, a take on the origin of Charlie and the Chocolate Factory. 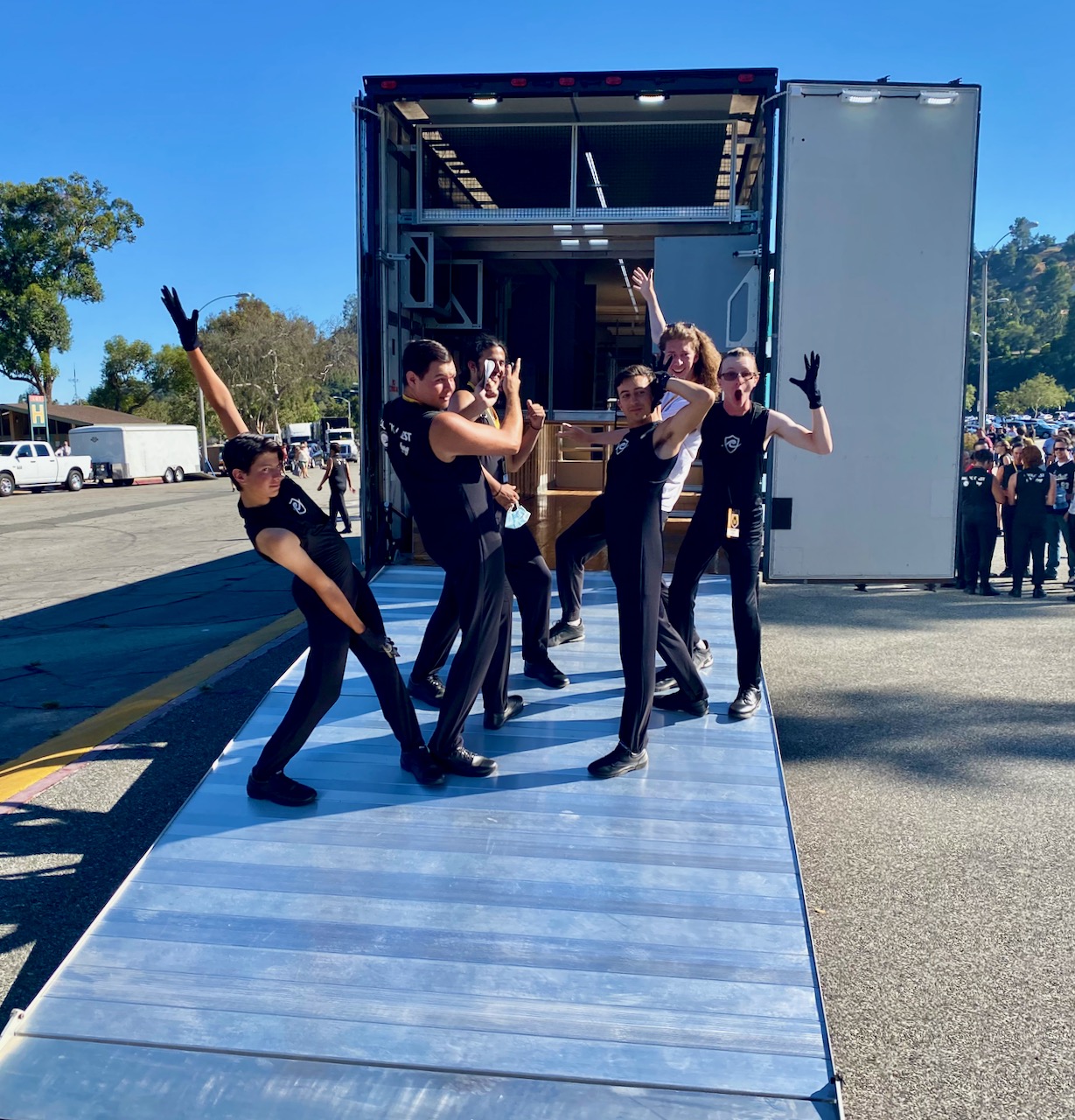 Leading off the world class corps following intermission was Pacific Crest, a show featuring several familiar props from drum corps’ past. Where do they go when the season is over? The Void. This show will unfold as the season progresses and I think that we will see more recognizable props along the way. Can you guess the props and their origin corps and shows? PC being the host corps performed a fun encore while the scores were tabulated. This was probably the largest turnout for a show that I have attended other than finals. It was well-worth the complex travel planning and execution utilizing planes, trains, and automobiles that put me in the company of some very wonderful folks for a truly special night of DCI. Thank you, Russ!

Well, time to aimlessly meaner around the spacious campus here in San Bernardino Valley College to check out the several corps that are making their way to the various nooks and crannies for their pre-show protocol. Now where is the BD caravanserai? I’ll keep you posted.