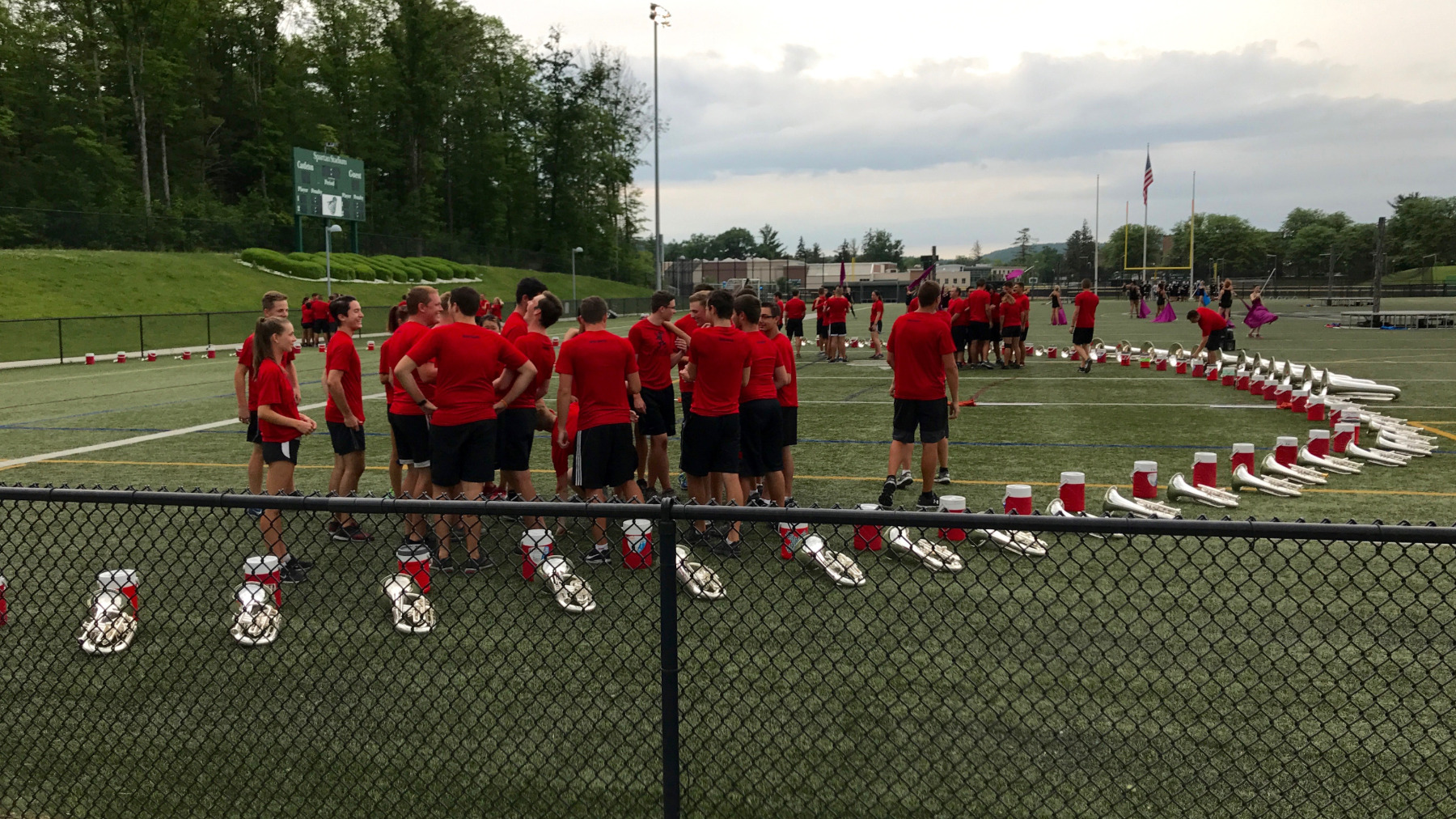 This is a personal reflection of my 10-day vacation as an intern-volunteer with the Boston Crusaders, a world class drum and bugle corps During the first four shows of the 2017 season. It started out as a daily blog. However, I have compiled my daily entries into this diary-style essay. Read on below and click through each day or print out this file:  I Ran Away with the Drum Corps.pdf
Introduction

So, as I sit in my comfortable, humble abode along the Mill Brook, I am contemplating with nervous excitement my upcoming adventure. I am running away with a drum corps – the Boston Crusaders. What this means is that I am trading in my comfortable semi-retirement and summertime in the idyllic Mad River Valley of Vermont for life as a sort of roadie for 150 young, hard working talented performers. Actually, at 62, I am not really sure what this means. I know that following a drum corps will entail thousands of miles traveled and hundreds of hours of hard work helping the corps stay on the move and performing at its (their) best. Did I tell you that this is a highly competitive activity? For the uninitiated, a drum corps is made up of brass, percussion, and color guard members. The World Class junior corps are the pinnacle of achievement in the marching arts and have members through age 21. The corps members work their butts off perfecting an eleven-minute program and tour all over the country to compete with other corps throughout the summer months, culminating in the championships in August. It is ‘uber’ band camp. I know it is a little hard to explain, so let me begin with a story about how I recently became reintroduced to the drum corps activity.

Back in 1973, my bother and I marched in a VFW drum corps, the Grey Ghosts. This was a small town parade corps that competed with other small corps at the local fireman’s field days following the parades. However, we went to watch the national competitions in Rochester, NY and were blown away by the top corps such as the Madison Scouts, Santa Clara Vanguards and the Boston Crusaders. As a teenager, marching did not stick and I moved on to other endeavors leaving drum corps behind. Fast forward to 2012. It was a dreary winter morning, weather too ugly to ski so I was whiling away the morning caught in a YouTube musical journey. I had recently added a Bose sound system to my 27” iMac and was enjoying listening to just about anything that came into my mind with a few key strokes. Suddenly, the thought of drum corps popped into my mind. “What is the state of drum corps after 40 years of hiatus?” I typed in a few characters and OMG! I dove in with all ten fingers. Looking back at that time five years ago, it seems to have been a life changing moment.

I decided that I would take in a live show in the coming season and headed to Glens Falls, NY, the closest show to Vermont. When I purchased the ticket at the window the guy said, “Let me see if I can get you a good seat.” I found myself firmly planted on the 50-yard line as high up as the old stadium ascended. The first corps’ performance, which is often the lowest ranked corps, was enough to hook me in for good. The corps that followed were even more amazing! Though I was not sure why one of them was doing a Christmas theme in June. Later that summer I bought tickets to the Mecca of the activity, a two-day competition in Allentown, PA, and have been going back there every year since. I now travel every summer to the Boston area as well as other major shows within driving distance in NY, PA and OH. I have also flown to Minneapolis and Atlanta for regional competitions that include over two dozen performing corps in one day. I became a friend of DCI, the sanctioning organization and enjoyed countless hours watching the performance on their archives before they took them down for copyright concerns. As you might have guessed, I have become a drum corps junky. So why am I running away with a drum corps? Again, I’m not really sure. I think it is more like running toward something rather than away. I will explore this question further in future posts.

Throughout my five-year re-immersion into DCI, I have become acquainted with the Boston Crusaders, my local corps. If you live anywhere in New England, it is “Boston Nation.” Maybe it’s that I have met so many awesome folks from the Boston area as a ski instructor at Sugarbush over the past twenty years that I feel such an affinity with the BAC. Boston Strong – Vermont Strong – Harwood Strong. I have had the pleasure of attending many of the regional events in several locations in the Boston area including some unique performances at Tanglewoods Performing Arts Center. Imagine the combined power of BAC, Bluecoats, Phantom Regiment and Cadets all playing Tchaikovsky’s 1812 Overture under the stars. The year before it was the Blue Devils who came east early to celebrate BAC’s 75-anniversary event at Tanglewoods. I was in the round for the BD warm up on the lawn. Freaking awesome! BTW – I love all the corps. It was at a Tanglewoods events where I met a first trumpeter from BAC who, in our brief conversation conveyed the great vibe of the Corps. As a strong appreciator and support of youth music education, I began to think how I could catch and be part of that vibe. How cool would it be to be part of this massive, high spirited, touring ensemble.

The closest physical connection I have to BAC is their spring training at Castleton University, VT, a mere 90-minute drive from my home.  I have had the pleasure of attending the Community Nights, where one gets the first glimpse of the new program. This year it was an amazing summer night. The Corps Director, Ron presented the Corps and gave very informative and interesting explanation of the activity and what it takes to produce a program such as this year’s Wicked Games. Perhaps you learned of the Salem witch hunts in early American history. The kids performed a run through of the complete show that I thought was very clean. Watch that guard! The program is strong and powerful, dark and beautiful, with a very compelling music rep. The Chris Isaak song Wicked Game is performed beautifully by the wonderful guard/singer and then with a rich and melodic explosion of brass. There is something about the rich textures of the BAC brass that really makes this song resonate. This is only going to get better and I was already beginning to tear up. I strongly believe this Corps will take this program a long way up the ladder, perhaps putting them in the top five at the Championships. The Corps also did a standstill of the BAC classics – more watery eyes. Finally, I had the pleasure of meeting some of the guard, and once again that vibe struck me. So that did it. I began to seriously explore how I could hop on board this cool train. I dashed off an essay/resume/email to the volunteer intern link and guess what? They invited me to join them in June. So, this week I am packing up and joining BAC for two shows in Ohio and we’ll see where it goes from there. What am I doing and why? Stay tuned. I leave tomorrow, first stop, Albany, NY for the movie theatre. I will keep you posted in future blogs from the road.